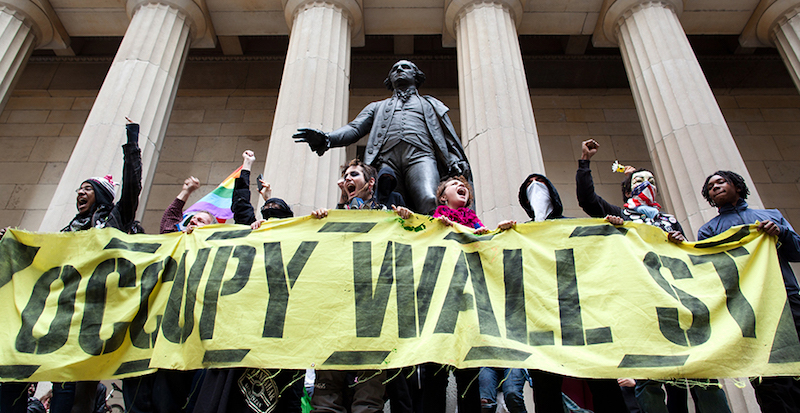 On the Work of Barbara Browning, Eugene Lim, Sarah Gerard, and More

It’s been over five years since Occupy Wall Street first entered the public consciousness, with a lengthy stint in lower Manhattan’s Zuccotti Park and subsequent acts continuing the themes of community activism, including relief work in the aftermath of Hurricane Sandy. As the movement became more and more high-profile, there also seemed to be a literary component to it. Occupy Writers displayed signatures from thousands of literary figures in solidarity with Occupy Wall Street’s mission, including G. Willow Wilson, Jonathan Lethem, Porochista Khakpour, and Margaret Atwood.

Additionally, a marathon reading of Herman Melville’s “Bartleby, the Scrivener” held in early November 2011  featured an abundance of New York-area writers, including Jami Attenberg, Joshua Cohen, Justin Taylor, and others. The connection between Melville’s story and the movement was one noted by a number of people, activists and observers of the movement alike. In an article in The Atlantic published in the spring of 2012, Johnathan D. Greenberg pointed out that “the way that Melville represents Bartleby’s occupation can help us understand the power of the endlessly intriguing movement.”

But for an event and a movement that captured the attention of many—notably, a number of writers and artists—it’s something of a surprise to see Occupy reflected in an abundance of literature published since then. It’s popped up here and there in pop culture: Christopher Nolan’s film The Dark Night Rises contained a subplot that seemed influenced by it, but which didn’t say much beyond “Wouldn’t it be terrible if a left-wing populist movement was co-opted by an amoral mercenary? It sure would!” There’s also been a recent comic book series set in Marvel’s superhero universe, Occupy Avengers, that’s explored questions of activism and social justice alongside action sequences and superpowers.

As for prose, though, it’s been harder to come by. Jonathan Lethem’s 2013 novel Dissident Gardens tells a kaleidoscopic story of several generations of one politically active Queens family. Lethem’s novel plays out like a history of activism in the 20th century and beyond, and so it’s telling that Occupy shows up periodically throughout the novel. Several of his characters encounter watered-down versions of Occupy at a remove from New York—a reminder, perhaps, that even the most noble version of political activism can suffer from diminishing returns. Though it’s also interesting to note that Lethem’s more recent novel A Gambler’s Anatomy features, in its later chapters, a more positive depiction of urban activism, in this case in San Francisco. And his earlier Chronic City riffs on Bloomberg-era New York, featuring a surreal version of some of the conditions that made Occupy Wall Street happen in the first place.

Barbara Browning’s first two novels, I’m Trying To Reach You and The Correspondence Artist, blended autobiography with more stylized (and fictionalized) components. Her third novel, The Gift, continues in this tradition, explicitly manipulating the line between autobiography and novel. Here, the protagonist is one Barbara Andersen, who may also be the narrator, and who shares numerous qualities with Browning, including an occupation, an apartment, and more. It’s a blurry situation: the narrator at one point acknowledges that she is fictionalizing part of this narrative; thus, is the “I” of the novel the real Barbara Browning or the fictional Barbara Andersen? And how does one map the space between one and the other?

Early in The Gift, the narrator recounts the roughly two-month-long period during which Zuccotti Park was occupied, and her distress when the police eventually arrested hundreds of people. Later, she takes part in teaching a course at the Occupy-affiliated Free University Week in Madison Square Park. And the narrator also develops a friendship with economist David Graeber, a thinker who, in the narrator’s words, “contributed a perspective to its early formation that was both strategically and intellectually important.” Graeber is also one a handful of people who appear in the novel under their own name; musician Arto Lindsay is another. (It’s also noteworthy that Graeber’s 2013 book The Democracy Project provided his own first-person perspective on the movement.) And while the amount of time dedicated to depicting Occupy Wall Street in The Gift is small, its impact is large, especially with Andersen’s correspondence with Graeber periodically punctuating the narrative.

That’s not the only place in which its impact is felt. Questions of economics run throughout The Gift, starting with the title, an allusion to Lewis Hyde’s acclaimed book on gift economies and the role of artists in society. An artist friend of Andersen’s, Tye, factors extreme candor about the cost of his performances into his work. And the overarching plot of the novel involves Andersen’s lengthy online conversations with Sami, a musician based in Europe, who seemingly has an abundance of free time to make art from which he doesn’t earn much money.

The questions raised by Occupy Wall Street—how the personal and the economic collide, the role of activism, the purpose of collective action—hover above Browning’s novel, and they give the book as a whole an additional charge. Without the presence of Occupy, the questions of identity and art that Browning poses would still be compelling, but the addition of it into the narrative mix adds a powerful component, and asks the reader to consider Browning’s themes in light of larger socioeconomic questions as well.

Eugene Lim’s novel Dear Cyborgs is a very different kind of story. Though Browning and Lim both make use of experimental devices in their novels, Browning’s are more subtle, while Lim’s is bolder. Dear Cyborgs shifts between scenes of utter realism—including one character’s moving memories of a childhood friendship gone sour—and stylized scenes in which teams of superheroes do battle with pulpy villains set on world domination. Long monologues dominate the novel, nested narratives within nested narratives that take on a powerful cumulative effect.

Here, too, Occupy Wall Street plays a significant role. One of the central characters, Frank Exit, remembers being tasked with retrieving stolen NSA files from a mysterious figure known as Ms. Mistleto. The names sound like the stuff of glorious superheroic adventures, but Ms. Mistleto’s memories sound much closer to home.

“On October 6, 2011, we’d met and gone to Zuccotti Park after work to walk among the protesters and those others, like ourselves, who came to be near a moment that would exist only briefly, so that we could embody the flicker of that protest, a protest that seemed dangerous, that seemed real.”

Lim’s novel features a world in which serious economic concerns coexist with pulp adventurers, and kitchen-sink realism can overlap with bold conflicts in stylized cities. Occupy Wall Street isn’t the only instance of activism that Lim cites: there’s also a moving invocation of the protests against the war on Iraq in 2003, as well as a discussion of the life of political activist Richard Aoki, who also acted as an informant for the FBI. Secret identities and covert activities can sound amazing when we’re reading about them in a comic book, but the actual way in which the overlap with political activism, Lim seems to be suggesting, is much more complicated.

Though Occupy Wall Street isn’t directly alluded to in it, one can even apply some of the same observations to Lidia Yuknavitch’s recent novel The Book of Joan. As with much of her writing, this is a heady book, with narrative layers and complexities juxtaposed with body horror and meditations on trauma and humanity. Yuknavitch posits her version of Joan of Arc as a child soldier in the near future who clashes with a demagogue even as the earth begins to fail. There’s an allusion to one of Joan’s early conflicts involving the Tar Sands in Canada—itself a recent flashpoint for contemporary activism. And it’s not hard to connect the resistance in this book, primarily composed of artists and the young, with their real-world counterparts.

Nonfiction has also allowed for some interesting and trenchant observations about Occupy Wall Street. In her recent book Flâneuse, Lauren Elkin writes about watching the movement come into being from her home in Paris. Here, she places Occupy into a larger context of urban political demonstrations, comparing them to the student protests of May 1968, while also exploring why a movement that took off in the United States didn’t resonate as much in France.

Elkin succinctly sums up both the movement’s appeal and of what watching it unfold from a distance was like. And she alludes to how Occupy also connects to the broader theories of people moving through space that she deals with in the larger text of her book. “[I]t needed a trespassing kind of movement,” Elkin writes. “But that physical openness created space for authoritarianism to storm in and declare it illegal.” It’s a lyrical depiction of a paradoxical phenomenon, and one that concisely invokes some of the same inherent conflicts that Browning and Lim do in their fictionalized takes on the movement.

One can also see the literary legacy of Occupy Wall Street in the politically-charged essays in Sarah Gerard’s collection Sunshine State. (Full disclosure: Gerard blurbed my novel Reel.) In the affecting “The Mayor of Williams Park,” Gerard writes about the government of St. Petersburg’s attempts to deal with homelessness in the city—sometimes effectively, sometimes cruelly. Gerard gives a fantastic sense of the different personalities clashing on the issue, as well as finding the gulf between inspirational idealism and the very human flaws that the people involved in the debate have.

Gerard also invokes Occupy directly, when discussing the concept of using tiny houses as a way to deal with homelessness. She cites a community known as Opportunity Village in Eugene, Oregon, which “grew out of the closure of Eugene’s Occupy encampment, which in 2011 attracted over one hundred otherwise homeless individuals.” Here, too, the legacy of Occupy is a concrete one; here, too, the positive aftereffects of the movement are documented. And it seems of a piece with the rest of the book, in which Gerard demarcates the complex landscape of politics, activism, and social change.

For some writers, the literary legacy of Occupy is one of documentation and analysis—an attempt to record the ethics and results of a movement, and to apply that to a larger sociopolitical or historical canvas. For others, it’s a useful reference point in terms of creating fiction: it’s still fresh in the mind of many readers, and it’s still something that can provoke heated debate. And while moments of activism are frequently the stuff of news reports and dispatches, sometimes time and the flexibility inherent in literary writing can further summarize the issues and conflicts at hand, and help evoke a bolder complexity

When All of Your Family Heirlooms are Stories 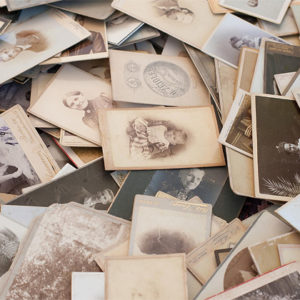 When All of Your Family Heirlooms are Stories

There were six of us cleaning out my grandmother’s apartment after she died—all women, all related, and each with a different...
© LitHub
Back to top