Is It Still Possible to Satirize America?

Toward the end of 2004, I first encountered Chris Bachelder’s essay, “A Soldsier Upon a Hard Campaign: Or, The Work of Art in the Age of Passion of the Christ Jewelry.” He wrote it as a loose tie-in to his then-forthcoming novel U.S.!, a send-up of American politics structured around the cyclical resurrection and murder of the original muckraking hack-novelist Upton Sinclair. The key question at hand was: As American society is already self-satirizing, is it even possible to write good, socially conscious satire anymore?

Back then, Bachelder was already having issues with the speed of American culture’s ridiculousness. His first novel focused on a Las Vegas event in which spectators bet on which of two super-predators would win in a fight. Not long after his book was published, the purportedly educational Discovery Channel began airing Animal Face-Off, a TV show that included exactly the type of stupid entertainment he meant to make fun of. “I found it poignant that Animal Face-Off was airing just as Bear v. Shark was sliding quietly out of print,” he wrote.

It seemed to mean something, but I wasn’t sure what. I suppose I couldn’t figure out if the TV show made the book more or less urgent and necessary. Probably less, I decided. The lag time between absurdist, futuristic satire and American reality was something like two years in this case.

Soon after, I returned to college to continue in my ultimately misguided goal of becoming a humor writer, a dream I’d had since I started writing comedy pieces for the local newspaper during high school. Growing up, I’d worshipped The Simpsons and idolized Conan O’Brien, who personified the smart-ass, surrealist comedy that formed my worldview. Yet I felt pulled in two directions. Although I was still spending as much time rising through the ranks of our college humor magazine and taking screenwriting courses, I was more excited by the poetry and prose required by my college’s old-fashioned and rigorous required English program. As I finished my degree, I found myself far more interested in my graduating English thesis on masks and intertextuality in Infinite Jest than in my film thesis, a screenplay my advisor described as “either the worst good screenplay I’ve ever read, or the best bad one.” He wasn’t wrong; the comedy I’d written was missing something, as were most of the pieces we published in the magazine. My path was set—I would become, instead, a novelist.

I didn’t start writing the book that eventually became Lost in Arcadia until 2010, two years after I graduated. I’d quit my job and figured I could finish the book’s first draft in less than a year, judging purely by how quickly I’d written screenplays and the hundreds of pieces of journalism that made up my meager income. This was, of course, an insane underestimation. An even bigger underestimation was how much revision the book would need, how many drafts I’d write before I was happy with any part of it, how many characters would completely disappear, along with scenes and ideas.

Drawing from my humor writing background, I set out to write a satire, although of course that wasn’t the only note I wanted to hit. I believe that satire should exaggerate the world while keeping characters within it as human as possible. When people talk disparagingly of cloistered MFA fiction, they’re often speaking of books that are divorced from all concerns besides the immediate ones of their characters—the world itself is missing. I’ve always been most interested in books with the ambition to look at how important context is, and I wanted to push against what I saw around me to try and get at the heart of a world that, to my eyes, was teetering at the edge of a dangerous precipice.

I grew up in New Mexico, and I remember hearing about the minutemen hunting down immigrants along the border not long after a pregnant girl I went to high school with was deported. My dad was a public defender, and he’d tell us the stories of other down-on-their-luck people who were arrested for simply wanting to live with and support their families. With this in mind, I decided to place at the center of my story something I would come to call “The Great Wall of Freedom”—a huge, heavily armed and guarded wall between our country and Mexico. It would symbolize not just the fear and racism plaguing large parts of America, but also our drift towards isolationism. The wall we put up between ourselves and our neighbor represented, well, the metaphorical walls we put up between ourselves and our neighbors, particularly our neighbors who aren’t white. America, as I saw it, was giving up on the rest of the world, and with this, it was giving up on any notion of responsibility or respect for anything but itself.

This wasn’t the only idea I wanted to write about, though it was a large one. I wanted to touch on the other currents I saw emerging, from genetically enhanced crops to 3D printing to the increasing role played by video games and virtual reality in most American lives. There were other, theoretically satirical sections that I eventually dropped because, over the course of the half-decade I spent working on it, they became so commonplace as to be quaint in a novel set in the future. Novels are a slow, slow form of art, and as I neared a publishable version of the book, I entered into a strange race to finish before every single part of it became dated.

I wasn’t the only one who recognized the encroaching reality of my originally fantastical vision of the future. In September of 2015, my agent emailed me, saying, “We have to get [the book] out while Trump is still dominating the news cycles. The comparison between him and Haight (he’s stolen the Great Wall of Freedom idea directly from you) is uncanny.” (In my novel, Haight is the ultra right wing, nakedly fascistic President of the United States whose policies shape its dystopian future.) It may be difficult to remember, but this was back when Trump was still considered a longshot, fringe candidate only popular with idiots and racists, a contingent of voters that many of us assumed was small enough to disregard. Few thought of him as a serious contender, let alone the future President. Few understood that the hate-filled nationalistic currents he embodied would form into a gale that would soon overwhelm our entire country.

It’s now the middle of 2017. Lost in Arcadia is finished, and the wall is no longer, as Bachelder put it, “absurdist futuristic satire”; it is, instead, a part of our regular political discourse. The Muslim ban, a version of which features in my novel, has been proposed and denied repeatedly in a depressing cycle of racism and hatred, like a hydra whose heads keep reappearing as soon as they’re lopped off. I found myself rereading Bachelder’s essay and thinking about the fact that, while it took two years for reality to overtake his satire, it had, in many respects, lapped mine completely.

I’m not alone in this. Julia Louis-Dreyfus has mentioned how Veep now seems more like a “sobering documentary” than the satire it began as, and the head writer of The Onion has spoken about his “comedic dread” at the prospect of continuing to write about the administration. But to say that satirizing Trump is impossible is akin to saying he’s already reached his limits, and I would hope that few of us would make that mistake again. The line where reality ends and satire begins has moved, for sure, but all that means is that we need to move with it. Creating and consuming satire is a way of keeping ourselves from complacency, from saying, “He can’t go any further than this,” or, in the words of Sinclair Lewis, “It can’t happen here,” because of course it can. It already has.

Sean Gandert is the author of Lost in Arcadia and the forthcoming novel American Saint. His stories and essays have appeared in publications including Paste Magazine, Solstice, The Columbia Journalism Review, and The South Dakota Review. He currently resides in Florida with his wife and a growing menagerie of cats. 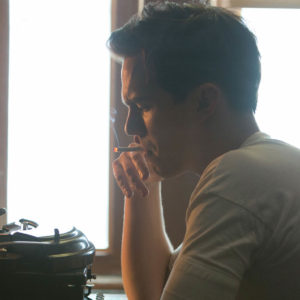 This week in literary film and television news, it was all about two gentlemen—not of Verona, perhaps, but very much of the land...
© LitHub
Back to top