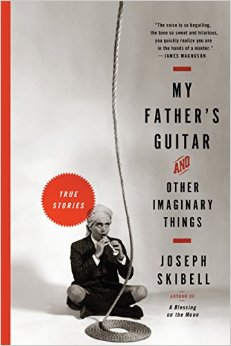 The following is from Joseph Skibell’s essay collection My Father’s Guitar & Other Imaginary Things. Skibell is the author of three previous novels A Blessing on the Moon, The English Disease, and A Curable Romantic. A former fellow of the Michener Center for Writers at the University of Texas, he is currently a senior fellow at the Bill and Carol Fox Center for Humanistic Inquiry at Emory University.

I don’t remember when it occurred to me to ask the telemarketers for money. Like everyone else in those days, we were inundated by their calls. Unsolicited offers for products and services, requests for donations, come-ons for weekend getaways made our phone ring at all hours of the day. These calls registered as Out of Area on my Southwestern Bell “Freedom Phone” Caller ID Box, and there seemed to be no way of dealing with them other than by not picking up.

Around this same time, I’d purchased a couple of books on the North American Esperanto Association’s website, and they arrived accompanied by an enticing brochure someone at the Esperanto headquarters thought to slip into my package announcing the 88th annual Universala Kongreso de Esperanto. It was being held that year in Sweden.

To the derision of almost everyone I knew–my wife and daughter, our friends, even distant relatives and casual acquaintances–I was teaching myself Esperanto, the universal language invented at the end of the 19th Century by Dr. L.L. Zamenhof, a Warsaw oculist.

In Esperanto, the word Esperanto literally means “one who hopes,” and it was Dr. Zamenhof’s fervent hope that a universal language, might usher in an age of international brotherhood and world peace.

Why my friends and family found universal brotherhood and world peace so damnably funny, I have no idea, and when they scoffed at me, as they invariably did, I said to them, “Ha! You see! It works! You’re laughing already!”

Persevering like a postman through the snow and the sleet and the gloom of their derision, I diligently worked my way through Cresswell and Hartley’s Teach Yourself Esperanto, while availing myself of the 10 Free Lessons offered on the Association’s website.

Depending on who you ask, it’s estimated that there are anywhere from a million to eight million speakers of Esperanto in the world, and becoming fluent in Dr. Zamenhof’s invented language entitles an Esperantisto to an official Esperanto passport with which he or she may travel the world, staying free in the homes of aliaj samideanoj (literally: same/idea/sharers). But when I asked the editor of the New York Times Sophisticated Traveler to send me to Sweden to cover the conference, though I’d written an article for the magazine on eccentric tourist traps in the American southwest and another on a one-block-long street in Vienna where both Freud and Herzl had lived, she told me the story was too parochial for their readers.

How can a universal language promoting international brotherhood and world peace be parochial, I wondered? And I saw her refusal to send me to Sweden as further evidence of humanity’s decline, the very sort of thing that had disillusioned Dr. Zamenhof and perhaps even led to his early death.

With no sponsor for the trip and unable–or in truth unwilling–to pay for it myself, I realized in a flash of inspiration that I could solicit the dozens of telemarketers who called our house every day for the funds I needed. And if I couldn’t raise the money for the conference from them–the chances of which seemed slim, even to me–I could at least undermine their incessant monetary demands upon me. After all, having refused me for my cause, how could they expect me to donate to theirs? Also, I reasoned, they were calling me. As a fund-raiser now myself, I’d simply presume that anyone who voluntarily called my number was doing so out of a desire to donate to my fund. I’d had a phone installed in my house for my convenience, after all, and not theirs.

This changed the entire dynamic of the situation.

I no longer dreaded the telemarketers’ calls. Instead, I found myself waiting for them with a keen sense of anticipation. Indeed, I was practically giddy the first time the phone rang and I ran into the kitchen and peered into the little caller ID box and saw the words Out of Area flashing on its tiny plasma screen.

I answered the phone and, leaning against the counter, pressed it to my ear. I waited through the tell-tale silence at the other end of the line, standing by for the telemarketer’s computer to connect us so that the telemarketer could utter the incongruous Hello? that made it seem as though I had called him and not he me.

“I’m soliciting funds to send a delegate to the 88th Annual Esperanto Congress in Sweden,” I told her, “and I was hoping I could count on your support this year. May I put you down for an eighteen dollars contribution?”

To be honest, I thought she’d simply hang up on me and I was surprised by her reaction. She started laughing, and she had a gorgeously vibrant and throaty voice.

“No, you’re right, you’re right,” I said. “Eighteen dollars is a laughably small amount for such an important cause. Shall we say 36, then?”

“I can’t send you dollars,” she said.

“Because I’m in Canada!” She laughed her glorious laugh.

“Oh, that’s okay,” I said. “Our critics claim that Esperanto has always been supported by loonies.”

She sounded sincerely regretful. She seemed a little starved for conversation, to tell you the truth. She’d probably have talked to me all day, and though she sounded pleasant enough, I had work to do. I was pleased to note, though, that, having refused me money, she no longer seemed to feel that she could ask me for any, and she hung up without identifying the company she worked for.

The second telemarketer hung up on me immediately, but the third one, a young man with a foreign accent, sounded intrigued.

“Oh, well, thank you for asking,” I said to him, propping my feet onto my desk. “Esperanto is an international language designed so that people the world over can easily learn to communicate with one another. Not only would this aid science and medicine and commerce, of course, but once people of different cultures are able to communicate fully with one another, our hearts will open, and we’ll be able to look beyond the barriers that divide us. You know what I’m talking about: barriers of ethnicity, nationality, creed.”

“Well,” he said, “I am kind of an international type of guy.”

He actually said this.

“Ah, well, Esperanto is right up your alley, then, and you could be proud to help sponsor a delegate.”

“Where do I send the check?”

“Where do you send the check?”

“Yeah, where do I send the check?”

And secure in a more familiar script, he rattled off my address.

“No?” He sounded hurt. “Why not? I’m an international type of guy.”

This was too absurd. Once again, I had to beg off, and not because the telemarketer on the other end of the line was demanding my money. On the contrary, he wanted to send me money, and he wanted to talk. And he wanted to talk about Esperanto! A subject no one in my immediate household or neighborhood or circle of friends or extended family had the slightest interest in. What’s wrong with me? Here was a potential samideano, a self-described “international type of guy,” and I was treating him as though he were nothing more than a pesky telemarketer!

What kind of Esperantisto was I?

I had to take stock. I had to take a hard look at myself. Why was it so hard for me to treat these telemarketers as though they were real people whose lives mattered and whose interests might coincide with my own? Most of them were probably fellow writers and actors and musicians, trying to cobble together a living while pursuing their underremunerative arts. I’d had jobs like that before, though–it’s true–I was never competent enough to keep them for more than a day or two.

Worse: Dr. Zamenhof would have been ashamed of me, I knew.

Still, I couldn’t help noting that, like the Canadian woman before him, this international type of guy neglected to identify his company and he forgot to try to sell me anything.

The next time I asked for a donation, the man on the other end of the line started stammering. “Um, um, um, um, Joseph,” he said in a dignified-sounded voice. “I am so very thrilled that you have asked me to contribute to this wonderful, this noble cause.”

“So I can count on your support then?”

“Thank you for calling, anyway,” I said.

“No, thank you, sir. Thank you. And you have yourself a wonderful, no, a marvelous evening.”

He, too, neglected to identify his company, and I was able to get off the phone without feeling either bilked or guilty for having turned down a good cause. Even more, I was pleased to see that this simple act of stepping out from behind the masks we wear–he playing the ambushing telemarketer; I, the besieged householder–had an enlivening effect on us both.

In the end, though, I couldn’t keep it up. There were too many telemarketers, and these conversations were proving too time-consuming. I barely had enough energy for the people in my life who mattered to me. I couldn’t be available for every Tom, Dick and Harry with a phone book.

Dr. Zamenhof wasn’t like this, of course. A gentle utopian dreamer, he gave of himself to everyone who crossed his path, seeing to his patients during the day, treating the poorer ones for no fee or in exchange for milk or butter or eggs, while working late into the night, first to create and then to promote, as a gift for all humankind, a universal language so that the manmade borders that divide us might be crossed, and the human heart, which we too often hold closed, like a fist, against our fellows, might open, and the world’s wealth–our material, spiritual and cultural heritage–might be shared with all its inhabitants.

What’s so funny about that? I still want to know.

Dr. Zamenhof was so beloved, in fact, that when he died in 1917 at the age of 58, droves of mourners accompanied his coffin to the Warsaw Jewish Cemetery, and many of the poorer folk among them had no idea that their simple, saintly doctor had invented an artificial language and led an international movement that had spread that language all over the world.

These days, it seems, we only talk to one another when we need something. It’s as though we’ve all become telemarketers, pestering each other for the recognition and the love we need. American life is so fundamentally economic that it’s hard to justify doing something that doesn’t have an economic advantage to it: sitting with friends, chatting with a stranger on the phone, learning a silly made-up language for the sake of world peace.

Now whenever I get a call from Out of Area, I let the phone ring, and as the ringing fills my house, I can’t help thinking that Dr. Zamenhof was right. We do need a new way of speaking to each other, but a universal language isn’t enough. It’s our hearts that must answer the call.

From “International Type of Guy” in MY FATHER’S GUITAR & OTHER IMAGINARY THINGS. Reprinted with arrangement with Brandt & Hochman, to be published by Algonquin. Copyright © 2015 by Joseph Skibell. 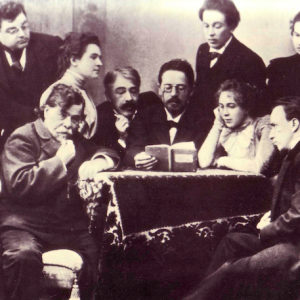