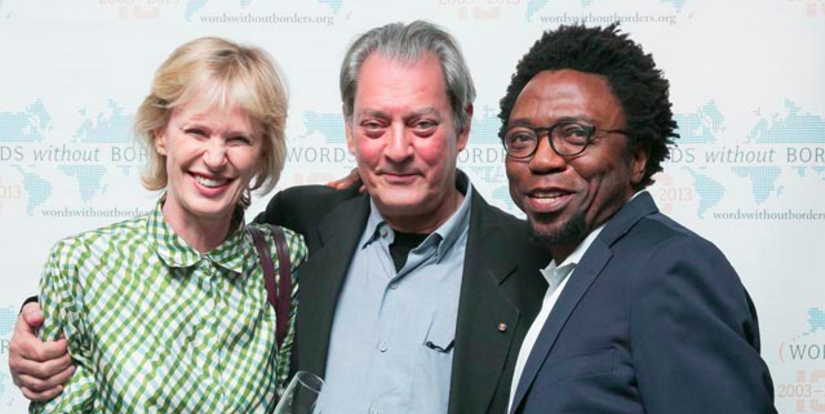 Lauren Cerand Reports on an Evening of International Celebration

Last Sunday night I was looking at a table of translated books as large as the new fiction in French table at Librarie L’Ecume des Pages on Boulevard Saint-Germain, and Tuesday night I was back in New York and everyone was talking about the vital importance of translation at the Words Without Borders gala. It was a gorgeous evening and the juxtaposition struck me: that almost anywhere else we would just be a room full of people talking about publishing rather than this special and extraordinary and rarified thing that famously hovers around three percent of new titles in any given year. Words Without Borders is doing much to cultivate a broader audience, and executive director Karen Phillips told me that the new Thai issue added a new language to the site, bringing the total to, I believe, 112.

Translation in American publishing is generally regarded as a marginal thing based on market share, and it is always surprising to me, especially when those involved are generally the most erudite, intelligent, sophisticated and cosmopolitan fellow travelers you’ll meet. Like for instance, when I was having lunch with Min Jin Lee at the Modern earlier this year, and as soon as our waiter found out we liked books, was thrilled to meet someone else who had read Yuri Herrera’s Signs Preceding the End of the World so that he’d have someone to talk about it with. I know the feeling well, and invited him to the Festival Neue Literatur (and New Yorkers note, the New Literature From Europe Festival is convening here in exactly one month). 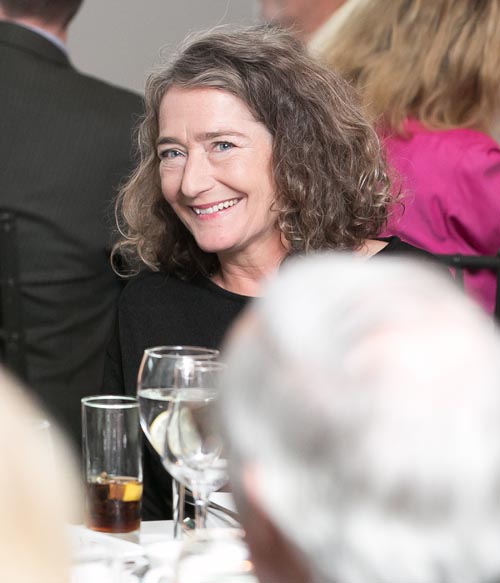 Let us now turn our attention to the evening’s honoree, Barbara Epler, recipient of the Ottaway Award for the Promotion of International Literature. She is an absolute heroine to me, and to so many, a steward and architect of one of the most storied legacies in modern publishing at New Directions, and also, somehow miraculously in her spare time, an artist who makes exquisite jewelry. I was delighted to see her as soon as I arrived and to hear that Rivka Galchen’s New York Times Magazine article, “The Profound Empathy of Yoko Tawada,” has already sent Memoirs of a Polar Bear, published this month, into another printing. 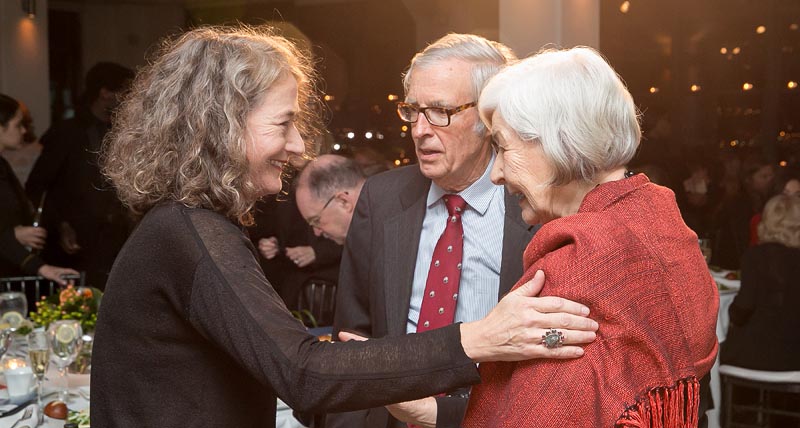 Barbara introduced me to Natasha Wimmer, famed translator of Roberto Bolaño’s posthumous breakout books that found him wide appeal in the United States, and a table host for the evening. Right now she is excited about a young Spanish writer, Gabriela Ybarra, whose memoir she is translating. El Comensal (The Guest Dinner) is a debut that reflects on Ybarra’s grandfather’s kidnapping and killing by ETA in the 1970s and the death of her mother from cancer. The latter section is set here in New York and Wimmer notes, especially that, “She does a really good job of writing about New York City, which writers from elsewhere do not always do.” 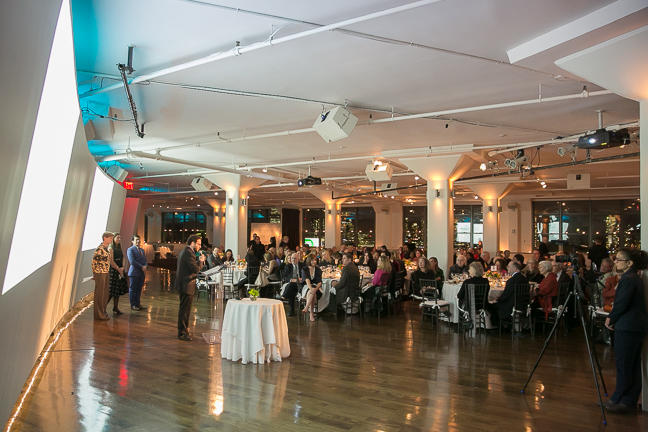 Table host Liesl Schillinger, who I met many years ago when she was the dance editor at the New Yorker and I was, for a time, the dance publicist at the 92nd Street Y (if I recall correctly, we attended a dress rehearsal by the sublimely cerebral choreographer Johannes Wieland together), is currently looking for a new fragrance—“jasmine, but it can’t smell like gardenia.” Liesl’s latest byline is “My Millennial Friend,” in the current issue of Vogue.

Other hosts for the evening included Carmen Boullosa, Idra Novey (who recently won this year’s Brooklyn Eagles Literary Prize from the Brooklyn Public Library), John Keene, Patrice Nganang, Katie Kitamura (who’s getting immense buzz for her next novel, A Separation, out in February), and many more. 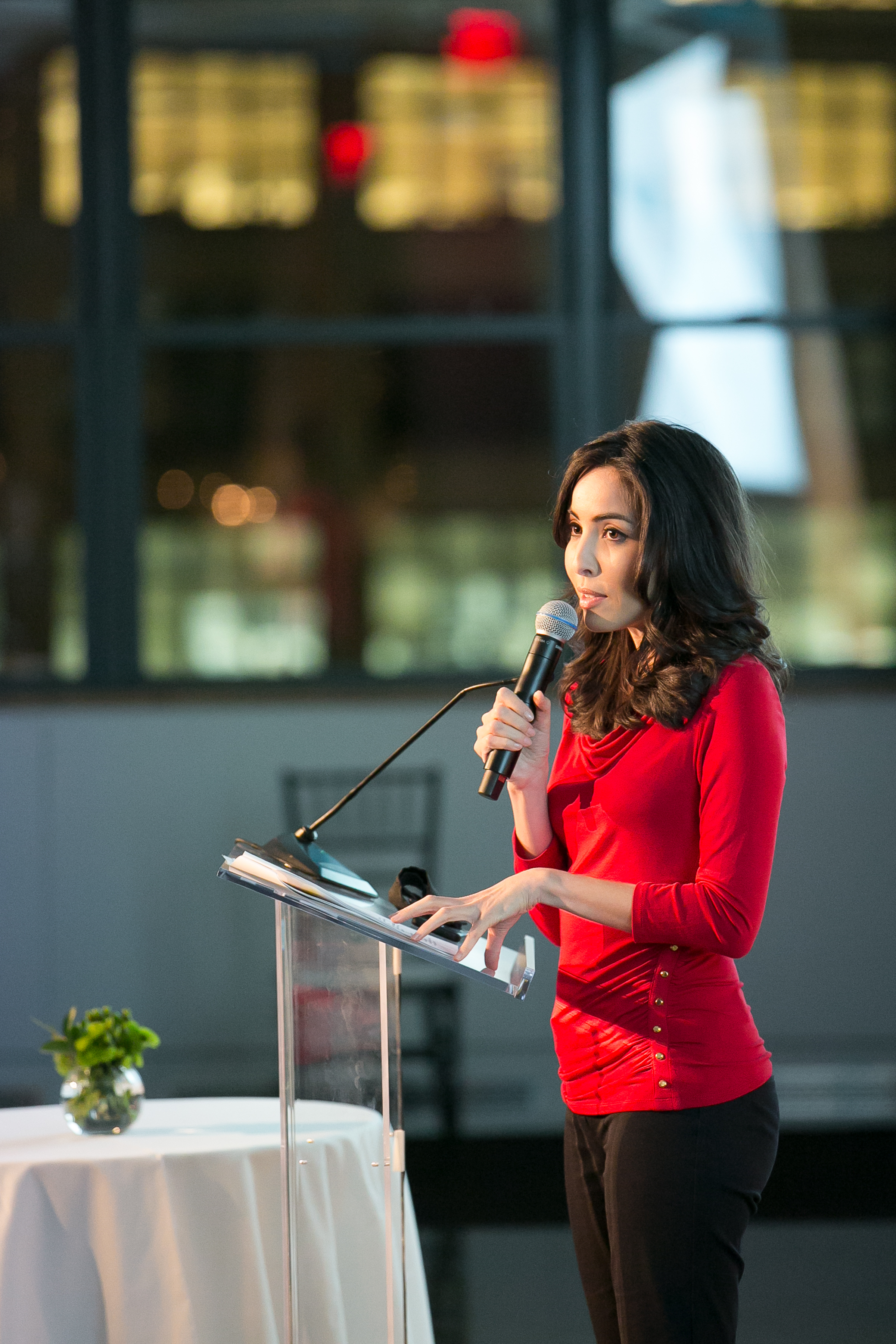 I then made an attempt to chronicle the fashion in the room, and was most struck by a pair of red suede sandals with a nice chunky heel and bows at the ankle. The real style story of the night, though, was scarves. I have never seen so many people wearing them, of all varieties, including pocket squares, and so well.

Next, I ran into Katrine Øgaard Jensen, with whom I recently enjoyed a great night out in Bushwick with Josefine Klougart, author of the instant classic, One of Us is Sleeping (translated by Martin Aitken, Open Letter) and Jakob Sandvad from Forlaget Gladiator, the Danish publishing house in Copenhagen. By the way, they are always looking for English-language writers to translate into Danish. Katrine has launched Europe Now Journal, a monthly must-read. My advice: read “Portrait of the Deportation of the Artist as a Young Man” first. 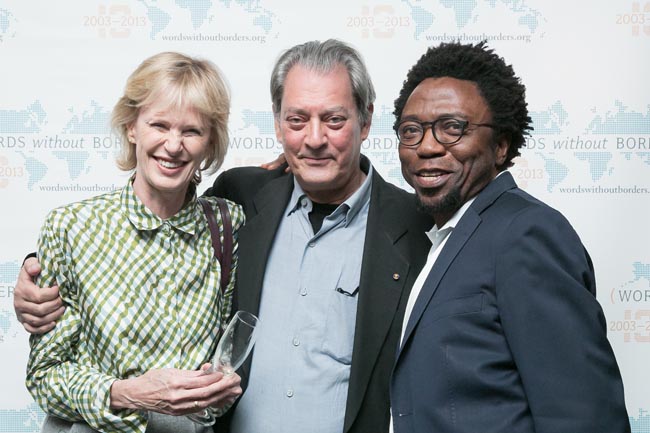 Brendan Kiely, an award-winning writer of books for young adults, was seated at my table for dinner and told me he is excited about table host Siri Hustvedt’s new book, A Woman Looking at Men Looking at Women: Essays on Art, Sex, and the Mind (Simon & Schuster, December), which he called “A necessary critique of the mind-body dichotomy in an era in which the political debates have fractured it even more.” I am, too, having found myself evangelizing on more than one occasion for her essay collection, A Plea For Eros, a book I like so much that I left my copy in the Paris apartment I usually rent so that I’ll always have it where I’d like to read it most.

Beowulf Sheehan—whose first name alone is the last word in literary photography chic—complimented me on my Millicent Rogers brooch that I bought at her eponymous museum in Taos this summer, and he noted that he was in New Mexico to photograph Cormac McCarthy two years ago. 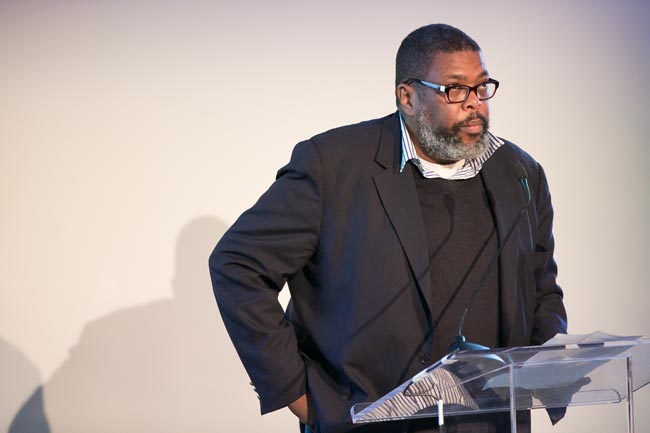 Edith Grossman introduced the evening and recommended the new Cervantes on Yale Press. 2016 Windham-Campbell Prize recipient Hilton Als introduced honoree Barbara Epler, with a very funny and moving meditation on Renata Adler’s observation that the phrase “writers write” is meaningless on its own, and praised the artist as editor, and especially Barbara, with her inimitable vitality: “The great editors are rarer than you think . . . She translates writers to themselves. Barbara is an American genius . . . She has instincts that cannot be bought.”

In her own remarks, Barbara noted that the daughter and son-in-law of New Directions founder James Laughlin were present, and praised the loyalty that has given the press security and longevity, noting that “Tennessee Williams never left,” as well as the respect in-house for unique patience and long-term vision.

I was also sitting with Esther Allen, translator of the Argentine novel, Zama, reissued by NYRB Classics, that everyone has been talking about. I recognized her striking pendant as a Barbara Epler creation, and Esther credited it as “the secret language of international publishing.” On my other side, translator Alta Price very glamorously got up halfway through the main course to read Italian poems from “Tattoos,” and the September issue, on the theme of migration.

After dinner, I saw Josh Ellison, editor of Restless Books, who has just published an Icelandic author, Oddný Eir, whose Bjork-blurbed Land of Love and Ruins (translated by Philip Roughton) I can’t get out of my mind.

Archipelago’s Kendall Storey has just returned from an editors’ trip to Chile, where she discovered many friends in common with Carlos Labbé.

Lovely Kristen Radtke, a B&N Discover pick for her coming memoir, was stunning as always, in a dress she bought in New Zealand that perfectly suited the international theme of the evening.

Talented editors Meakin Armstrong and Charles Shafaieh (whose own participation on the Young Publishers Committee made me especially excited to attend) were having a passionate discussion about film, in particular Badlands and L’Avventura of which Meakin said, “They’re a complete cinematic education. It’s like Jesus made those films.” A fitting tribute for the week that Monica Vitti turned 85, and I was taking notes for my own edification. I hear, too, that FilmStruck.com is the next thing destined to be the last word in classic film streaming at home.

The flowers were fresh and charming, the Tribeca skyline glittering, and everyone was gearing up for an afterparty intended to last well into the night. I took one last appreciative look around the room—and, having helped to publicize one translated book this year, Nir Baram’s absolutely extraordinary novel of moral reckoning, Good People, translated by Jeffrey Green (Text Publishing), pledged to myself to try and add many more to my list—and with that, and my Barbara Epler quartz pinkie ring sparkling, made my way on to my own evening agenda.

As for future Ottaway winners, I am hoping to see Daniel Medin of Music & Literature and Sylph Editions’ Cahier Series and various other endeavors (see the translation issue he edited for the White Review in January) up there in the bright lights soon. I’ll be back for that.

A Book Doesn't Have to Be Long to Win an Award 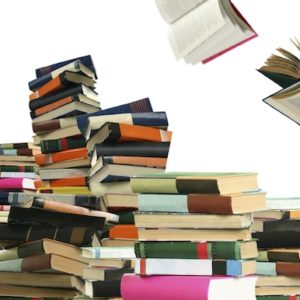 A Book Doesn't Have to Be Long to Win an Award

The National Book Award for fiction is one of the highest honors a writer can receive. Like most of the literary establishment,...
© LitHub
Back to top
Loading Comments...