By Women Possessed: A Life of Eugene O’Neill 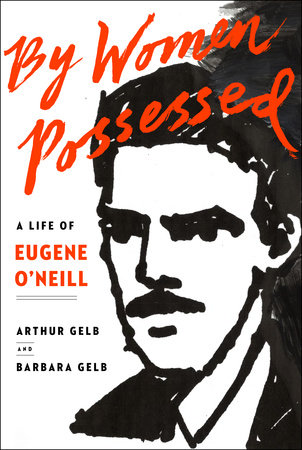 With no further impediments to their marriage, Carlotta and O’Neill say their  I do’s (in this case a simple “Oui!”) in Paris on July 22. They exchange thin gold bands, both engraved with the same quotation from Lazarus Laughed: “Life laughs with love!” (Nine years later, in anticipation of their  anniversary, Carlotta  and O’Neill changed  their  wedding bands for new ones inscribed with an alternate  quotation from Lazarus Laughed: “You are my laughter—and I am yours.”)

Carlotta  and O’Neill spend the night  in their  suite at the Hotel du Rhin, then motor back to Le Plessis the following evening during a fearsome thunderstorm. O’Neill, terrified of thunder and lightning, cringes. But Carlotta,  unperturbed by the  supernal  fury, rejoices in her  diary: “Mr. and Mrs. Eugene  O’Neill at home.” Earlier,  she had declared that their marriage was “to be for each of us until death! Thank God!”

O’Neill authorizes his lawyer, Weinberger, to announce the marriage to the American press (instructing him to include the purposely misleading information that  he and Carlotta will travel to the Tyrol for a honeymoon), and the New York newspapers carry the story on July 24. He also cables his friend the portrait photographer Ben Pinchot to release a photograph for which he and Carlotta sat before  leaving for Europe; it will appear in the next issue of Vanity Fair and subsequently be reprinted in newspapers worldwide.

In the photo,  O’Neill is almost surrealistically  handsome—a movie star version  of himself. He wears a superbly tailored dark suit, white shirt, and wide striped tie. Gazing into the camera’s eye, he allows the barest suggestion of a smile to lurk at the corners of his sensual mouth; his eyes are speculative; his hair lies in a thick wave over his right temple, its silver beginning  to spread; his mustache,  still dark, is immaculately trimmed.

Between them, Carlotta and O’Neill, both nearing their  forty-first birthdays,  have begun to create a legend about the remote château- dwelling expatriate, secluded in work and in love. For most of the next quarter century, Carlotta  will devote herself to perpetuating this fable, while O’Neill perversely—more  than once—will attempt  to sabotage it. For now, however, all is harmony.

Two months  before the wedding, O’Neill, in consultation with Carlotta,  had formulated  a design for living. To begin with, he would no longer allow anything but his own creative tempo to determine his output. Reflecting that he had written  eighteen  long plays during  the past eleven years, he concluded  it was “too much”; he had often  forced the plays just to keep himself occupied. Writing would always come first (his “vacation from living”), but he would rest and relax in the periods between creation. “America has had a bellyful of my stuff for a while,” he told friends.

What he really wished he could avoid—an oddly contrary  wish for a dramatist—was the process of moving his plays off the written page and onto  a stage. “My interest  in the productions steadily decreases as my interest  in plays as written  increases,” he had explained at that time to Eleanor  Fitzgerald,  the executive manager of the Playwrights’ Theatre, with whom O’Neill had a close friendship.

“I am a bit weary and disillusioned  with scenery and actors and the whole uninspired  works of the Show Shop,” O’Neill told Fitzgerald.  He was thinking, he said half-seriously, that he might end up “writing plays to be published with ‘no productions allowed’ in red letters on the first page,” even if it meant  holding  back plays from  production (and even publication) until he was forgotten.

Sick of being a public personage, he was planning life ahead so that he could go back to his old private life of “unpestered  artist.” Forty, he said, “is the right age to begin to learn and I think my new work is going to show more poise, more patience with itself to reach at perfection,  more critical analysis of itself and contemplation, more time given it for gestation and genuine birth, more pains.” It was time, said O’Neill, to achieve “a more mature outlook as an artist.”

For a man who treasured  his privacy, O’Neill was surprisingly  open with certain friends, not only about his work but about his personal outlook. To Fitzgerald,  he confided it had taken a complete upheaval of his life to attain his new mind-set.  He could now look forward to years of undisturbed work, lovingly protected  by his Carlotta.  “I’ve everything to back me up now,” he concluded, “love of the kind I’ve always wanted, security and peace.”

Only five days after explaining his new vision to Fitzgerald,  he made his first significant entry in his Work Diary about the play he’d been contemplating since 1926. “Virtually decide on Mourning Becomes Electra as title—trilogy—with separate subtitle each play.”

During  the next two months,  he completed  a scenario of Electra, and was dreaming of achieving a poetic resonance for his modern-day Greek characters  worthy  of their  tragic  fates—a language  that  would  transcend any dialogue he had ever written.  But he was far from certain he could ever overcome what he perceived as his own particular inadequacy. For that reason, among others, he was not yet ready to grapple with his new project full-time.

In a singular outpouring to the critic Joseph Wood Krutch, he conveyed his frustration:

“Oh for a language to write drama in! For a speech that is dramatic and isn’t just conversation!  I’m so strait-jacketed  by writing in terms of talk! I’m so fed up with the dodge-question of dialect! But where to find that language?”

His  use  of  dialect  to  give  voice  to  the  inarticulate   women  and men whose lives he knew so well and for whom he appointed  himself spokesman—although arresting in its time—was restrictive (Swedish- American for Anna Christie, street-black  for The Emperor Jones, seaman’s vernacular for The Hairy Ape, fumbling New England  back-country  for Desire Under the Elms).

There was much he wanted to think about before beginning  on the actual  dialogue  of Electra. “It  is going  to  be difficult,  this!” he  con- fessed to George  Jean Nathan on August 31. “It would be so easy to do well. The story would see to that—and that’s the danger I want to avoid. It has got to have an exceptional quality to lift it above its easy possibilities and make it worthy  in some sense of its classic antecedents—or it will be a rank f lop in my eyes no matter  what others may think of it. So I’m going to do a lot more of tentative  feeling out and testing  before I start.”

But he had another  reason to delay his return  to the trilogy and full-time  writing,  and that  was his sense of obligation  to his new marital state. He wished to indulge Carlotta’s desire (and also his own) to show off the grandeur  of their torturously achieved matrimonial bliss.

Among the series of guests he and Carlotta  entertained at Le Plessis were the Carl Van Vechtens,  Philip  Moeller,  and Theresa Helburn, as well as Eugene Jr., on vacation from Yale, who had just been staked by his father to a tour of Germany,  and who visited him and Carlotta  for two weeks in late August and early September.

O’Neill was proud of his nineteen-year-old son, who had grown to six feet two inches and weighed 180 pounds.  To O’Neill’s delight,  his son and Carlotta hit it off; she took him sightseeing and shopping for clothes. “A fine youth truly!” O’Neill wrote to Nathan. “He fits in very well with us. . . . So all’s well.”

Zealous in  the  performance of her  duties  as hostess and secretary, Carlotta  appointed  herself gatekeeper  as well. She began  slicing away those of O’Neill’s friends she regarded  as disloyal because of their  ties to Agnes.

Her function as  gatekeeper  was relentless.  It  was always she who spoke or wrote the dismissive or severing words, claiming she did so on O’Neill’s  behalf.  She  was performing what  Strindberg, in  his  Spook Sonata, graphically described as “the labor of keeping the filth of life at a distance”; it was a labor that some of O’Neill’s friends believed she pursued with too much relish.

In almost every case, however, the severing was administered because O’Neill  desired  it, either  actively or  passively. “Neither God  nor  the angels could have kept anyone away from O’Neill that he wished to see,” Carlotta  once protested.  If he deferred,  in some cases, to Carlotta’s dislikes and prejudices, it was the natural deference of a loving husband.

As Carlotta  told Saxe Commins, she and O’Neill were looking forward to peace and work in “a new world” of their own making; this, she wrote  spitefully to Commins, meant “cutting loose the rotten drift wood” that comprised O’Neill’s Greenwich Village coterie.

“We would be delighted if we never heard a word from or about these people again,” she said, adding that O’Neill was going through “a new development—new pleasures—new richness.” There were “new subjects of study” entering  his life; the “old skin [was] being shed!”—and with it, she hoped, “the old parasites!”

And what were these “pleasures,” this “richness” of O’Neill’s new life? First,  according  to Carlotta,  was his work environment. In  his tower studio, Carlotta  installed a chair, custom-made in England—a  contraption described with amused wonder by the visiting George  Jean Nathan as “a cross between a dentist’s and a barber’s chair with all sorts of pull-in and pull-dash  contrivances  attached  to it, and with a couple  of small shelves for reference books.”

The chair had an attached  board  “so arranged  that  it can be maneuvered  in front of him and on it he rests his pad.” The pad to which Nathan referred was a blotting  tablet  held in a leather  frame that  lay on O’Neill’s desk, an accessory that  graced all the desks in his subsequent homes.

“It was his writing desk, so to speak,” according to Carlotta,  who once explained  that  O’Neill  could  only write  when  seated  in “a particular chair” with his feet on a footstool  and the leather  blotting  pad on his knees; in that position he could write “for hours at a time,” she said, adding that  O’Neill had been using “this particular  pad” since May 1928 (presumably  changing  the blotter  paper itself from time to time). “He could never write at a table or desk! I bought him various styles of each— but it was wasted money.” (He occasionally wrote on the tablet in bed.)

From BY WOMEN POSSESSED: A LIFE OF EUGENE O’NEILL. Used with permission of G. P. Putnam’s Sons. Copyright © 2016 by Arthur Gelb and Barbara Gelb. 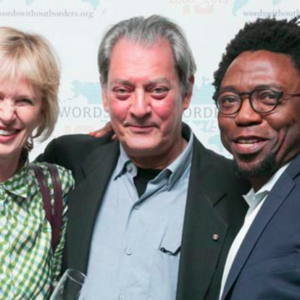 International Glamour at the Words Without Borders Gala Last Sunday night I was looking at a table of translated books as large as the new fiction in French table at Librarie L'Ecume...
© LitHub
Back to top