Owen Laukkanen on the Procrastination that Helped Him Find his Mojo

I had a little bit of a crisis last year.

Normally, I’m a very focused writer. I work to a schedule: five days a week, 5,000 words a day. I work until I finish a project, I take a little time off, and then I set to work on a new project. Some of these projects get published, others languish on the collection of external hard drives that have begun to clutter my apartment. It doesn’t matter. What matters is that I’m writing.

I like to tell aspiring writers that talent, by itself, isn’t the great arbiter of who succeeds in this business—and I’m living proof. I’m proud of my books, and I’m not trying to pretend to be modest, but I’ve always believed that raw talent doesn’t mean a thing without discipline. And until last spring, I had that in droves.

Then it happened. I handed in the final draft of The Forgotten Girls, my upcoming novel, and instead of turning my hand to next year’s novel, as I’d normally do, I turned off the computer, bought a camera and a radio scanner, packed up my Jeep and drove off to the woods. And there, instead of writing, I took pictures of trains.

Anyone who knows me even remotely, or has glanced at my Instagram can tell you that I really like trains. Like, obsessively so. In fact, The Forgotten Girls centers around a serial killer preying on train hoppers in wintry northwestern Montana. It’s my sixth thriller featuring state policeman Kirk Stevens and his FBI counterpart Carla Windermere, and while I’d managed to keep my geek side tamed for the first five books, in book six, I finally caved and went full foamer.

(Foamer is the word train workers call trainspotters in the United States and Canada. It comes from the fact that we supposedly foam at the mouth whenever we see a train. I can neither confirm nor deny that this happens.)

I mean, we all have our geeky side, right? And every little boy probably goes through a phase where he’s fascinated by trains. I just happened to not grow out of that phase. It sat mostly latent for a few years, but as soon as I handed in The Forgotten Girls, I had a major flare-up.

All of a sudden, there was nothing I wanted to do more than stand on the side of a mountain with my radio scanner tuned to the local railroad frequency, waiting on a train to photograph. I bought bigger lenses and nicer equipment. I taught myself Photoshop. I joined train forums and met other foamers—and for days, and then weeks, and then months, I didn’t do a lick of writing.

On the surface, there was nothing wrong with this. Certainly it was fun, it was creative, and you could have worse hobbies than climbing mountains with a camera strapped to your back, even if it’s just to watch trains. It was good exercise, anyway, for me and my poor dog. And I could convince myself I didn’t have any pressing deadlines; I deserved a break.

But deep down, I was worried. More than worried, I felt guilty. I didn’t exactly miss writing, and somewhere in the back of my mind, I wondered if this meant I didn’t want to be a writer anymore. I certainly wasn’t feeling any urgency to get back to the laptop.

Publishing a book is hard work, and I guess that’s so obvious it hardly bears repeating. As a creative outlet, it’s an exhausting, wrenching, time-consuming process that, for me, involves long periods of self-doubt and insecurity. By the time my books are through the editing process, I’ve generally lost all conviction that they deserve to be published at all. At that point, I definitely wouldn’t mind if nobody happened to read them.

I don’t think I’m the only writer who gets this way. And don’t get me wrong, I love this job. The lead times in publishing are so long that by the time the new book hits bookstores, I’ve regained my objectivity, remembered what drew me to the story in the first place, and I can go to a reading or a signing or an interview and believe I—and the book I’m promoting—deserve to be there.

In the age of Instagram, on the other hand, photography provides much more immediate gratification. I can go into the mountains all day, come home with a hundred pictures, and have a thousand “Likes” by morning. And if I mess up a shot, well, you know what they say: there’s always another train coming.

But “Likes” don’t pay the bills, obviously. I’ve been lucky enough so far that writing does. So if I’m not writing, I’m not earning. And that was the scary part—or was it?

I had a lot of time standing beside railroad tracks to think about what I was doing. Wondering if I’d somehow lost my mojo; if I’d ever write again. And what I decided was this:

We don’t get into telling stories because we think it’ll keep the rent paid. At least, if we’re smart, we don’t. We write because we have to, because some deep creative urge compels us to put pen to paper in order to stay sane.

I didn’t write The Forgotten Girls because I needed to buy puppy chow for my rescue dog. I wrote the book because I’d moved into a neighborhood that had for years been the hunting grounds of one of Canada’s most notorious serial killers, a monster who preyed on drug addicts and sex workers because he knew they were the people who would slip through society’s cracks. I wrote the book because these people are my neighbors, and the wounds here are still raw. I wrote because I needed to come to terms with what this monster did, and writing’s the best way I know how.

What does this have to do with taking pictures of trains? Well, no matter why I wrote The Forgotten Girls, there’s a point in every book’s life where it moves from creative endeavor to product to be sold. My wonderful publisher thinks enough of my writing to believe they can sell my books, and that isn’t something I can simply ignore.

By contrast, I am never, ever going to monetize my pictures of trains. You may be surprised to hear this, but there isn’t really the same demand for train photographs as for FBI thrillers. And I realized, as I stood out there in the woods, watching the leaves turn around me, and waiting for the next train to pop out of that tunnel, that there was something truly liberating about that, about being creative for one’s own self, about building a skill with no expectation but self-expression. It had been a long time since I’d done that, and I didn’t want to let it go.

My point, if I have one, isn’t that it sucks to be paid for your writing. It really, really doesn’t. Writing thrillers is a dream job, and I’m incredibly lucky to have a publisher who encourages me to write stories like The Forgotten Girls, stories that move me, that mean something to me. I would write these books even if I wasn’t paid for them.

My point, rather, is that art becomes something different when your creativity becomes intertwined with your ability to buy groceries for your family. And that, as creatives, it can help to step back, take some time and be selfish, make art for our own sake again, and nobody else’s.

So how does this end? I’m still taking pictures of trains. A few months back, I began carving out time for writing again. I sat, and I wrote, even if I knew there was a super-rare train coming my way, or all of my foamer buddies were having fun trackside. Art does take discipline, after all, especially if it’s work.

And after a while, something magical happened. I found my mojo again. Suddenly, I was immersed in stories, even when I wasn’t sitting at the computer. Suddenly, I was plotting my next chapters while I was walking the dog, buying groceries—heck, waiting for trains. Suddenly, I was exceeding my word counts, writing earlier in the morning and later at night. Suddenly, I was in love again, as in love with writing as I’ve ever been before. I’m working on a couple projects that I really believe in, that I really enjoy writing, stories that capture my imagination just as The Forgotten Girls did, and still does.

And I can’t say if the trains helped, or if I just needed time. What I do know, though, is that there will be days when the writing seems like work again, when my job is more commerce than art, when I just need a break to create something for just me. And when that happens, the mountains will still be there, the train tracks. My camera and my radio scanner will still work just fine.

And the trains? Heck, if I miss a couple because I’m caught up in another story, there’s always another one coming down the line.

Owen Laukkanen is the author of the Stevens and Windermere series, beginning with The Professionals, which was nominated for the Anthony Award, Barry Award, Spinetingler Magazine Best Novel: New Voices Award, and the International Thriller Writers’ Thriller Award for best first novel. His follow-up, Criminal Enterprise, was nominated for the ITW Thriller Award for best novel. A resident of Vancouver, British Columbia, he is now at work on the next book featuring Stevens and Windermere. 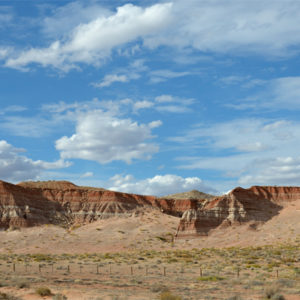 The following poem originally appeared in Freeman's: Arrival. Windfall Away to the uncertain desert of Utah, the...
© LitHub
Back to top