Chiara Barzini at the End of Quarantine

At the party we were frazzled by the proximity to others. Tequila was served and the bolder ones loosened up, the rest of us stayed in individual corners waving and smiling to the other guests. A tall woman with wide shoulders, broke the ice and declared she would sleep not with one man but with his entire family. The days of confinement were over, she would do it because she could. Everyone judged her for her promiscuity. We considered ourselves to be better, people who knew how to inhabit restraint. Captivity had become our virtue and we flaunted it.  I warned the tall woman she might not want to sleep with an entire family. Younger brothers often had squished faces, maybe they looked confused or drunk and she’d find them repulsive. Bounty bounty bounty! she screamed back at me. The more the better: squished faces, women, men, younger brothers, cousins too. She had been trapped for too long and nobody could stop her. I smiled timidly at the other guests. It’s always the women who give in first, they said.

Despite the tequila, many of us were still gauging whether we were allowed to come near the others. Some guests gathered in small clusters, only with those they knew by blood or had spent time with before. We told ourselves nobody we loved could hurt us. The party went on for days and nights, everyone in their own space, gazing out the windows at the dying evenings, thinking about the world. By the end of the celebration, the tall woman stomped around like a savage. She’d tasted every last drop of the family she had chosen for her experiment. I on the other hand, had been quiet. I hadn’t touched or smelled anyone but myself for years, it seemed. My mind was wide awake but my body had grown sad. I had been fasting from life, wearing the masks, feeling entombed, crying over the kitchen sink while washing the dishes, the same as all the others. I had seen the narrow path before me, had become a smaller and smaller human being, almost invisible. And that’s when I saw him. He entered the room from the outside world. Initially he was just as cautious as everyone else about not getting too close, not smelling too much. He was just passing by, he said. He didn’t mean to join the party. People stopped talking and looked at him. He was new, not to be trusted. He could be harboring all kinds of indiscreet germs, infections. The fast had been good for me, it taught me to count on myself, it showed me how strong I could be, it cleared my eyes and made my hair long and shiny. I had virtue now, but when he walked in, my heart skipped a beat. I had met him before, out there in the world when we were younger. He was the kind of man who connected elements, traversed the sea and the sky with ease. He fed from the earth, the most dangerous kind of man. When he passed in front of me, my stomach growled. After a fast one should begin eating lightly, the guests reminded me. Raw vegetables first, then fruit, slowly introduce cooked food. It takes weeks before you can digest. Try to never be a carnivore again. The man headed to the drinks table. I locked eyes with the tall woman and all the family members she’d been with, slumped next to each other at the bar, satiated. A sudden longing from another era rushed back in a wave. Beware, return to your corner, the others said, but I was already moving. How badly I had missed him, how strongly I wanted to be with him. I said hello and cornered him into a dark room. I closed the door behind us. He let me do it. Inside, he was warm and his eyes were deeper than the darkness around us. We hugged and smelled each other’s breath.  “I have never missed anyone like this,” I told him as I dug into his elbow with my teeth and ripped out a small piece of skin. “I have never missed anyone like this either,” he replied and chewed on my hands. Through the air vents I could hear the party people snickering about my weakness. How informal I’d been. See, I was one of those women after all. We went deeper into the corner of the room until we had to crouch. I made myself tiny so the guests might forget me. I had him all to myself now and I would keep going until I was done with the rest of his arm.

Chiara Barzini is an Italian author and screenwriter. Her work has appeared in Bomb, Noon, Harper’s, Vogue, T Magazine, Vice, The Village Voice, Rolling Stone, Interview Magazine, and others. She is the author of the story collection Sister Stop Breathing (Calamari Press, 2012) and the novel Things That Happened Before The Earthquake (Doubleday, 2017), currently in development as a film. She lives in Rome. 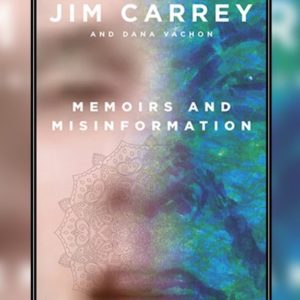 Jim Carrey: Don't Let the Little Moments Pass By “None of this is real and all of it is true.” This week on The Literary Life with Mitchell Kaplan, Jim Carrey discusses...
© LitHub
Back to top
Loading Comments...