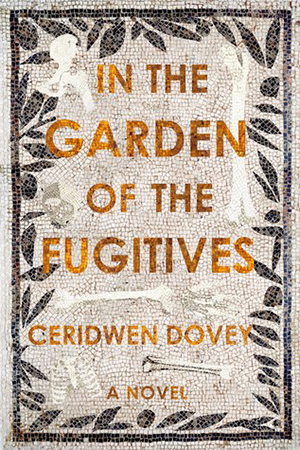 The following is from Ceridwen Dovey's novel, In the Garden of the Fugitives. Seventeen years after Vita broke off contact with Royce, her former benefactor, she receives an email from him. Although their history is fraught, the two try to use their new relationship as a way to process deeper pasts. Ceridwen Dovey was named a 5 Under 35 honoree by the National Book Foundation for her debut novel, Blood Kin.

I drove from the farm into town this morning for my aerobics class, and became one among a legion of middle-aged women reflected in the mirror behind the instructor. The communal high hits halfway through and even the shy become uninhibited, counting down the kicks as we run towards our doppelgängers in the glass. We are proud of ourselves for still being so limber.

Something weird happens when a bunch of people come together to perform any kind of ritual, whether it’s dancing, singing, painting one another’s bodies or just jumping around. The participants begin to feel an ineffable energy hovering above them, separate from their own selves yet fed by their hearts and minds—and so religious feeling is born, then transferred to a totem or person, a god or gods. Collective effervescence, Durkheim called it. Don’t you love that? All of us just bubbles caught up in the liquid flow of togetherness.

Yep, I’ve just used Durkheim to describe an aerobics class. (I had a lot of wine before starting this. My cottage on the farm is cold in winter, and alcohol is cheaper than electricity in Australia these days.)

In the gym, we are no doubt objects of ridicule to anybody looking through the partition. We are worshipping nothing more than ourselves, so it has no lasting meaning. The euphoria wears off fast. Afterwards we avoid eye contact, slink off to our cars. And yet going to the gym is one of the few ritualised experiences left in my life. That probably applies to many people. The good rituals are stacked towards true youth. It’s all downhill after the teary high school farewells, the university orientations, the sports team initiations, the endless graduation liturgies. For the lucky, the weddings, the christenings.

This might be why I take some trouble over hosting the oil tastings on the olive farm, though it is difficult to get the tourists to look up from their phones, attached like biolimbs. The farm has long been owned by a family who made most of their money harvesting pearls up north, so they insist on displaying pearl jewellery in the tasting room. Visitors do a double take, the old purity and danger confusion, like being sold seafood in the desert. Diamonds would be a better fit than pearls; at least they’ve come from deep in the earth. But this family do not have stakes in a diamond mine. And so, pearls beside olives.

To me this gives the oil-tasting ceremony a touch of the votive: the long strings of pearls look like rosary beads to be counted off in prayer. I slow things down, ask visitors to hold their palms over the plastic cups to heat the oil to room temperature before swirling it around in their mouths, and tell them that an oil’s pungency is measured according to how many times it makes you cough (a two-cough is medium-bodied, a three-cough more robust). I start with the grassier oils, move on to the infused ones—chilli, lemon—hand out half-moons of apple to cleanse the palate, end with a sip of verjuice. I like to hold up a ripe olive and say that each cell of the fruit contains a single droplet of oil.

“My present solitude is confusing. It makes me long for things I didn’t properly value when I had them.”

Sometimes I think my four years of communal living at college set me up wrongly for adult life. I loved being part of a single listening organism in a hushed lecture hall, and feeling the body heat and breath of other students packed into the library in the middle of the night, and never having to eat a single meal on my own, not even breakfast. Nothing that comes afterwards ever fully reproduces that sense of belonging, of effortless community.

My present solitude is confusing. It makes me long for things I didn’t properly value when I had them. When I first met you, I thought the fact that you’d never married could only have been a choice, especially for a man of your means, your background. Now I see that sometimes we have no say in the matter. If the person you want to be with can never be yours, what else is there to do but learn to be alone?

That dismal interview at the television production company, the one you mentioned—it felt like a warning that my years at college were a fairytale, a dream from which I would soon have to wake. I had cycled across the river, past the football stadium and soccer fields and into a place of blockish, Soviet-looking buildings. It was as if I’d crossed a line. One last turn of my pedals and I was beyond the university’s magical reach.

The producer had rather generously suggested I show him a rough cut of my documentary about the wine farm. His caustic comment afterwards was that it was a film one had to commit to watching, that it didn’t have enough narrative hooks to draw people along. Was this a failure on my part? Or were narrative hooks exactly what I wanted to avoid? I got defensive, told myself I didn’t want the internship anyway.

Back in the hallowed safety of my room, I paged forward in my diary, picked a day at random in November, a date in my unimaginable post-college future, and wrote: Are you happy?

That young girl leaving questions for her future self was less self-assured than I was aware of at the time. She already had a premonition of what she would become, of what I am now. A person living out her life, no longer trying to do anything with it. A person who has accepted her insignificance.

Did you consciously model the Lushington’s ethos on our university’s rhetoric of individual excellence, of exceptionalism, etc.? It’s meant to guarantee success, yet I wonder if it in fact nudges people towards failure, by planting the idea that you can maximise yourself outside of relation to others. Not one of the wise elders whose paths I was privileged to cross in my years there ever said to me: No human being should have to go through life alone; do everything you can to find your person, the one who makes it bearable, the one who will love you back. Or everything else will be for naught anyway.

At the coffee shop in town there’s a blackboard where somebody writes pithy sayings. Animals that lay eggs don’t have bellybuttons. This logic did my head in. I’m not sure why.

And yesterday: Many animals cry. Only humans weep.

From In the Garden of the Fugitives. Used with permission of Farrar, Straus & Giroux. Copyright © 2018 by Ceridwen Dovey.