On Feeling Deeply & Writing as An Act of Exploration

When I was a boy, I cried easily. I was, as one of my grade school teachers wrote in a note to my mother, “a sensitive child.” Sometimes I cried because my feelings were easily hurt. Another boy once called my bicycle “an old junker,” and that was enough to start the tears flowing. Other times, I cried because I was afraid. Usually, there was no rational basis for my fear, but try telling that to “a sensitive child” and see where it gets you. One day, I was playing at a friend’s house and his grandfather came outside to tell me my mother had car trouble and he was to drive me home. He said this in his direct style with no hint of sympathy, which started me thinking there was something horrible that he couldn’t bring himself to tell me. As we made the drive to my house, I began to imagine that my mother had been in a serious accident and was hurt badly, or, worse, she was dead. By the time we got to my house, I was bawling and could barely stop, not even after my mother came out of the house, swept me up in her arms, and explained that she’d only had a flat tire.

“Shh, shh,” she said as she rocked me in her arms. “Everything’s just fine.”

But there were times when things weren’t just fine, like the times my father whipped me with his belt, or a yardstick, or a switch cut from a persimmon tree. He’d lost both of his hands in a farming accident when I was barely a year old, and he wore prosthetic hands—his “hooks,” he called them. The two pincers of a hook could grasp the end of his belt, or that yardstick, or that persimmon switch, and he would start in. If I wept, he said, “What are you, a crybaby?” And soon my legs, my buttocks, my arms would be on fire from the force of his lashes.

He was always sorry at the end, and often he cried, too. I won’t pretend to know what his life was like after that accident, but I know that he became an angry man, and I imagine that most of his rage was with himself because he hadn’t shut down the power take-off on his tractor when the shucking box on his corn picker clogged, and, when he tried to clear it, the snapping rollers caught first one hand and then the other. Years later, my aunt told me that I stayed with her and my uncle while my mother was with my father at the hospital. Each day at noon, my aunt would take me there, and my mother would come down to the waiting room and try to hold me.

“You wouldn’t let her,” my aunt said. “You’d just cry and cry and reach out your arms to me.”

So I became a child of anxiety and fear, a child who learned not to trust happiness. Danger was just around the corner. A shucking box could clog. A mother could go away. At any moment, a life could divide into before and after.

I’m still that sensitive child. At the age of 60, it doesn’t take much to bring me to tears. Even a schmaltzy television commercial can do it, or a movie about a sports underdog, or an emotional song. What my grade school teacher said about me is still true. “I suspect he cries,” she said, “because he feels things so deeply.”

I make no apology for my emotional reactions. I say the hell with anyone in my life who told me while I was growing up that real men don’t cry. I’d rather be a crier than be the sort who never lets the world, with all its joy and sadness, touch him.

Someone asked me recently if I ever cry while writing fiction. This person said it had happened to “a friend” of his, and the “friend” found it alarming. As fate would have it, I’d just read something the singer-songwriter Lucinda Williams had said about her father, the poet Miller Williams, teaching her to not censor herself when she wrote. “I met a young man who came to me for advice on how to be a good songwriter,” she said, “and I told him don’t be afraid to dig into the deepest part of yourself and face your demons. He gave me the saddest look and said, ‘I don’t think I can do that.’ He was afraid to do that. I felt bad for him. It never occurred to me that someone would be too afraid of doing that.”

To write is to participate in your life. To write is to question, to speculate through the art of whatever shape your chosen genre finds, to say the things that others are often afraid to admit.

It never occurred to her, I imagine, because, like me, she’s always considered writing an act of exploration, an inquiry into the self, into the world around her, into the dark corners and the fears and the shames, into the mysteries and human failings that make us all human. To write is to participate in your life. To write is to question, to speculate through the art of whatever shape your chosen genre finds, to say the things that others are often afraid to admit. We, who have been doing it a long time, wouldn’t have it any other way. We know the price it asks of us, and we know the great rewards—not the publications and the prizes, though, of course, those are nice, but the pleasure of looking closely and giving expression to something that matters to us. Do it with enough artistry and it will matter to others.

I have to be vulnerable when I write, and sometimes that means crying. When people read my novels or short stories, they never know the exact source of my emotional involvement, but if I’ve fully engaged with the emotional terrain of my material, those readers will feel what I’ve felt. There’s nothing better than being heard, knowing that I’ve written something that has touched someone else. How can I do that, though, if I don’t first travel to those places inside me where all my wounds, my regrets, my fears and joys reside?

For years, I’ve used a simple writing activity with my students, one designed to let them feel what it’s like to be vulnerable on the page. I ask them to remember pairs of shoes they wore when they were children and to choose the pair to which they still have some sort of emotional attachment. I then invite them to use that pair of shoes to take them to a childhood memory that still affects them deeply. I ask them to start a freewrite with the line, “I was wearing them the day…”  Those shoes can take us to other prompts as well: “I wish I’d never…  Or, “The last time I saw…” Or “I wish I could tell you…” Or “I’m ashamed to admit…” Whatever it takes to invite us back to a moment where we were hypersensitive to the world around us and to our own emotions. Any moment that made us feel vulnerable.

Have I ever cried while writing fiction, or otherwise felt my emotions rattle? Time after time. I hope in whatever number of days I have left, I’ll have the chance to experience this again and again. Jim Valvano, the college basketball coach who died of cancer, said this, “If you laugh, you think, and you cry, that’s a full day. That’s a heck of a day. You do that seven days a week, you’re going to have something special.”

Let that be the last word to those who might frown on a grown man crying. We are all special human beings, capable of great depths of thought and feeling. Not just the artists, but every one of us. It’s what connects us. Those of us who write, though, or work in other artistic mediums, have an obligation to create the works that will touch those who don’t have the ability to create. We have to be fearless. We have to touch the sore spots, face the demons. We have to. People are counting on us. We have to remind them that we’re all alive.

Lee Martin is the author of The Mutual UFO Network. His novels are Late One Night (Dzanc, 2015); The Bright Forever, a finalist for the 2006 Pulitzer Prize in Fiction; River of Heaven; Quakertown; and Break the Skin. He has also published three memoirs, From Our House, Turning Bones, and Such a Life. His first book was the short story collection, The Least You Need to Know. His fiction and nonfiction have appeared in such places as Harper’s, Ms., Creative Nonfiction, The Georgia Review, The Kenyon Review, Fourth Genre, River Teeth, The Southern Review, Prairie Schooner, and Glimmer Train. He is the winner of the Mary McCarthy Prize in Short Fiction and fellowships from the National Endowment for the Arts and the Ohio Arts Council. He teaches in the MFA Program at The Ohio State University, where he is a College of Arts and Sciences Distinguished Professor of English and a past winner of the Alumni Award for Distinguished Teaching. 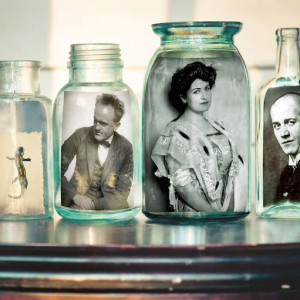 Only a tiny fraction of fiction published in English is translated, and only about a quarter of that translated fiction was originally...
© LitHub
Back to top