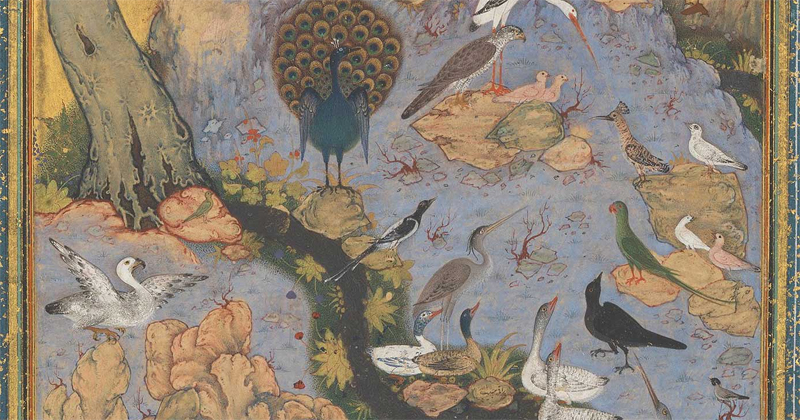 What We Can Learn from The Conference of the Birds

“That anyone has ever been able to surpass one of the great figures of the Divine Comedy seems incredible, and rightly so,” wrote Jorge Luis Borges, in his Nine Essays on Dante; “nevertheless, the feat has occurred.” Borges was speaking of the medieval Iranian poet Attar’s allegorical epic, Manteq al-Tayr, or The Conference of the Birds, and the magnificent image that caps the poem, of the mythical bird-deity of Persian literature, the Simorgh. Writers from Rumi to Borges to Porochista Khakpour have drawn on Attar and his sublime Simorgh, a vision of coherence in a divided world. Over eight centuries later, and with an exciting new translation released, by Iranian-American poet Sholeh Wolpé, Attar’s Simorgh still speaks to our moment of change and challenge: a moving and unsettling ideal from a very different, but very relevant time and place.

Farīd Ud-Dīn Attar, a pharmacist and poet in 12th-century Nishapur, Iran, composed The Conference of the Birds as a Sufi allegory for the soul’s journey to the Divine, with the Simorgh cast as the great king of the birds of the world. The birds look to the hoopoe, King Solomon’s favorite avian courier, to guide them on the Way to the Simorgh’s home on Mount Qaf. The birds present their fears, excuses, longings, and attachments to the hoopoe, who upbraids them to demolish their egos and fall into an ecstatic, irrational love with the Divine. The hoopoe illustrates each lesson with a series of parables on this not-quite-sane, often shocking love: there are kings who fall in love with male servants; there’s a Sufi sheikh who apostatizes for love of a Christian girl; there are blood-tears, and flayings, and every manner of holy fools ecstatically degrading themselves. The Way, Attar wants us to understand, is not confined by logic, worldly prudence, or even religious orthodoxy. Every form of ego must be sacrificed, even the conceit of rectitude.

The hoopoe’s lessons unnerve the birds so violently, some die on the spot. The remaining birds journey through countless ordeals and allegorical terrains with names like the Valley of the Quest and the Valley of Poverty and Annihilation. In the end, out of 100,000, only 30 pilgrims reach Mount Qaf. Purified and chastened by the journey, they behold the Simorgh: only to see their own reflection in the lake waters. Attar reveals his clever twist of language: si morgh, in Persian, means “30 birds.” All the birds are the Simorgh; Simorgh is them. Borges admired Attar’s economy of narrative: “adroitly, the searchers are what they seek.”

Sholeh Wolpé’s stunning new translation—the first in over 30 years—renders Attar’s engaging, singular voice with wit and flourish. As medieval Islamic allegorical epic translations go, The Conference of the Birds is also highly readable. Wolpé provides section outlines and headers to orient readers; she also makes the brilliant choice of presenting the parables as prose, emphasizing their substantive themes, while the birds’ speeches remain in a clear and lively verse. The first native Persian speaker and first woman to translate Conference, she renders genderless Persian nouns like “Simorgh” (and “God”) without that irritating Western resort to the ‘default’ masculine. (In the original mythology, the Simorgh is quite clearly a female deity.) Most importantly, Wolpé offers Attar’s masterwork not as a curiosity from a bygone age, but as a text of living wisdom whose message is always timely.

At a time when Islam is being presented both by hostile forces and extremist “champions” as a religion of grim, inflexible dogmas, Attar’s religiosity is a moving breath of freedom. For Attar, orthodoxy is just one more egoistic attachment that must be shattered to make room for the Divine. It’s a rebuke fit for dogmatists of every stripe and creed.

And while Attar wrote in a specific religious context, Wolpé chooses universal terms for the Divine, emphasizing accessibility over scholasticism. Conference isn’t really for would-be mystics in Boulder and Big Sur, but for a world beset by materialism, fear, and self-righteousness, by a damaging individualism that celebrates getting one’s own over the common good.

Wolpé’s translation comes right as we’ve elected a president who seems to embody all those things, and as many of us struggle to face the loss of national comforts, security, prosperity, and idealism. The Conference doesn’t just rebuke the proud demagogues of the age, but also goads the lukewarm who want to do good, but fear losing what looks like safety and happiness: those who are fine with #TheResistance, so long as it remains a hashtag. Attar the pharmacist writes powerfully about the disease of taking too small and close a view of things, a disease which afflicts all of us, and as cure proposes a radical openness to the other, the greater, and the more important.

“Populations do good or evil en masse: not as loosely affiliated individuals, but as movements, electorates, and economies.”

This cure plays out in unexpected ways within Attar’s surprisingly frequent trope, running through the parables, of an erotic drama between a king and his beautiful servant. Sometimes, the king is a clear allegory for the Divine, and his servant’s devotion or fickleness is raised as a model or warning. But other parables feature memorably unpredictable, dangerous, and foolish kings. In one, a king falls in love with “his silver-bodied servant,” and favors him by practicing archery, William Tell-style, with an apple balanced on the youth’s head. “In the meantime, I writhe,” the boy says, “my life always in danger for nothing at all.” These kings are living, strutting egos, embodying the pride and worldly anxiety the Wayfarer must repudiate.

The greatest sovereign in the poem, of course, is the Simorgh, who paradoxically is the pilgrim birds and their sovereign at once.

In his 1948 essay “The Simorgh and the Eagle,” Borges compared the paradox of Attar’s Simorgh to the Eagle in Dante’s Paradiso, in which thousands of righteous biblical and classical kings appear flying in eagle-shaped formation through the Heaven of Jupiter. “In the abstract,” Borges concedes, “the concept of a being composed of other beings does not appear promising,” citing the grotesque, composite allegory of Rumor in the Aeneid. But Borges praises the Eagle and the Simorgh as “one of the most memorable figures in Western literature, and another of Eastern literature,” while granting the advantage to Attar’s Simorgh:

The Eagle is merely implausible; the Simorgh, impossible. The individuals who make the Eagle are not lost in it (David serves as the pupil of one eye; Trajan, Ezekiel, and Constantine as brows); the birds that gaze upon the Simorgh are at the same time the Simorgh. The Eagle is a transitory symbol . . . ; those who form its shape with their bodies do not cease to be who they are; the ubiquitous Simorgh is inextricable.

This democratic corpus of Attar’s Simorgh contrasts with the tyrants in his parables, who marshal the collective force of their subordinates in service of their singular wills. It’s an especially potent contrast in our particular American political moment, as we watch our corporate CEO of a president wrangle with courts and entrenched bureaucracies while mass protests unfold in city centers. Trump is ego incarnate (some might say id incarnate), while the protestors—especially in the photos from the Women’s March in city after city—take on a composite, “inextricable” identity.

Attar’s image of the Simorgh captures something profound about how, especially today, populations do good or evil en masse: not as loosely affiliated individuals, but as movements, electorates, and economies. The complex ethics of the individual’s tiny, marginal impact on enormous moral events—whether it’s commuters taking the bus to fight climate change, or young people buying health insurance to lower the cost for everyone—is still being developed, and proving one of the most divisive flashpoints in the political landscape.

Attar doesn’t provide a solution to this question, but The Conference of the Birds does offer insight into the emotional and spiritual experience of this composite identity. It involves transcendence but also an annihilation of sorts, like any honest mysticism. It involves hardships and the loss of everything we cling to in order to feel better about ourselves. But the alternative is living falsely, attached to paltry, fleeting, even treacherous advantages, “always in danger for nothing at all.” Wealth, power, status, ostentation, the fear and respect of others: I look at Trump, I read and hear what he says, and I see a deeply unhappy man made more miserable by these things and his dread of losing them. As Attar tells us:

Disappear. This ruin is not your abode.
What matters is the essence of truth . . .
When the True Sun shines eternal,
does it matter if here is an atom
or here, its shadow?

Then, there are the faces of the marchers and protestors, unconcerned—at least for one cold Saturday morning, at least some of them—with anything like power and wealth, but caught up in the energy of the movement. Protests are, at their best, spectacles of affinity and unity; people see how many others, and how many different others, come together for something greater than themselves. “This is not a place of uniformity; here you find unity in diversity,” Attar writes of the Valley of Unity, the allegorical space where pilgrims shed the illusion of separateness.

Theodore McCombs is a writer in Denver, and a member of the Lighthouse Writer's Workshop there. His fiction and essays have appeared in Guernica and Electric Literature, among other outlets. He is a co-editor and regular contributor at the literary blog Fiction Unbound and he tweets as @mrbruff.

Virginia Woolf: There Are Way Too Many Personal Essays Out There 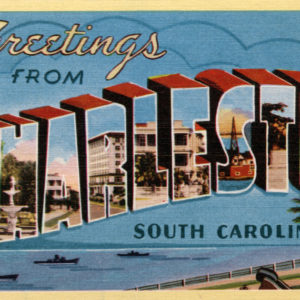