Though it has been adapted many times, and in many forms, there are—or have been, until now—only two truly iconic adaptations of Jane Austen’s 1815 novel Emma, and they were released almost exactly a year apart: 1996’s Emma, a straight period take starring a 24-year-old Gwyneth Paltrow, and 1995’s Clueless, which transposes the book to modern day Beverly Hills. (For the record, there was a third, albeit less iconic, Emma in this same narrow time period, a 1996 ITV TV movie starring Kate Beckinsale, which causes me to ask: what was going on in the mid-90s that made everyone decide to adapt the same 19th-century novel at once? Was it Dolly the sheep? Was it Gak? Was it a subtle shift in the universe triggered by the birth of Timothée Chalamet?)

Whatever it was, 25 years later, we now have a new contender: 2020’s Emma., directed by Autumn de Wilde (in her directorial feature debut), written by Eleanor Catton (the author of The Luminaries and the youngest ever winner of the Booker Prize), scored by Isobel Waller-Bridge (who also wrote the score for the second season of her sister’s show Fleabag) and starring Anya Taylor-Joy (known primarily for The Witch, Split, and Thoroughbreds).

So how does it stack up? Well, despite the silly superfluous punctuation in its title, Emma. is sumptuous and beautiful, a real pleasure to watch. Both cinematography and color palette are striking and modern, and under the obvious, though not overwhelming, influence of Wes Anderson. (In particular, it makes use of that warm mustardy yellow that has come to be representative of Anderson—though I actually interpret this choice as a reference not to the king of cinematic charm but to Cher Horowitz’s memorable yellow ensemble in Clueless.)

Watching 1996’s Emma shortly after the newest incarnation, I was amazed at how dark and dreary it looked in comparison—I had remembered it as fresh and bright, but reader, it is not. And then you have, if you’ll forgive the bluntness, Anya Taylor-Joy’s face, which feels modern all by itself, her beauty offset and enhanced by the oddness of her face; Emma. relies on Taylor-Joy’s eyes in the same way that Clueless relies on whatever Alicia Silverstone is doing with her lip all the time.

But modern colors, interesting looking actresses, and contemporary cultural bona fides aside, this is not really a modern reimagining of Emma. It’s more as though the old Emma has come back after a long winter vacation with a makeover inspired by Clueless. (I mean, even the 2020 Mr. Elton, Josh O’Connor, looks like he was cast based on Clueless‘s Elton, Jeremy Sisto.)

In fact, Emma., alone among these three adaptations, begins as the book does, with Emma Woodhouse, “handsome, clever, and rich.” (This is already an improvement on that spinning painted globe, in my opinion.) And the story unfolds without much meddling, with much of the dialogue, as in 1996’s Emma, pulled straight from the book. Emma. also seems to take some cues from that first adaptation: I noticed more than a few very close recreations—almost recitations—of scenes and expressions. Taylor-Joy has said she wouldn’t be watching Paltrow’s portrayal of Emma before her own, and she (and Bill Nighy) are perhaps the least guilty of this. But either way, the repetition didn’t exactly bother me—it felt a little like watching the two versions of The Office: almost identical in project and plot, but each its own universe, with its own flavor.

To be fair, despite the marketing, Eleanor Catton says they weren’t really trying to make the adaptation feel particularly “modern,” because the story already is. “When I read Emma, I find it endlessly relatable,” she told The New York Times. “It doesn’t at all feel like a book that’s 200 years old.” Director Autumn de Wilde agreed, saying “A great story’s a great story. My goal was never to modernize, but only to humanize.”

Still, there are a few gestures at a modern sensibility that go beyond the cinematography and color choices. Bill Nighy is superbly over-the-top and irreverent as Mr. Woodhouse; he pushes the character’s canonical hypochondria so far as to be camp—his is a winking, knowing performance, which feels welcome after the more sincere portrayals of other actors, particularly the bumbler in 1995’s Emma. (Clueless gives this aspect of the original text the barest attention, transforming it into Cher trying to cajole her high-powered father to ingest a vitamin or two, to little avail.)

There’s also the fact that the opening of Emma. shows us both Mr. Knightley and Emma’s butts (the latter only in profile, and in a very funny moment, as our heroine is impatient to be warmed by the fire). But despite a few flourishes of irreverence, Emma. is a fairly traditional period film—albeit one with an untraditional heroine, whom you either love despite her objective awfulness or hate on account of it. It’s traditional enough that when, in the middle of the final, dramatic confrontation between Emma and Knightley, Emma gets a bloody nose, I couldn’t quite tell how I felt about it. Normally I would love that kind of Whedonesque move—Joss Whedon being the master of letting us have the high romantic moment while also undercutting it by pointing out its absurdity—and in the moment of watching, it felt fresh and unexpected, but in retrospect, it seems a little out of place. “I’ve thought a lot about how much the body interfered with some of the most romantic moments of my life,” de Wilde told the Times. “I love the comedy of fighting your body. And a nosebleed is so exposing.”

I remain ambivalent on that score, but there are very few actual missteps in the film. One glaring one was the choice of the red capes for the cadre of students, including Miss Smith (portrayed by a striking Mia Goth), who would occasionally scamper by; in 2020, they read strongly as Handmaid knock-offs and for no apparent reason. Whether intentional or not, it felt like an attempt to make a culturally relevant visual hat tip, and it failed. There are no handmaids in Emma . . . except for the actual handmaids, of course.

In the end, Emma. feels almost like a mashup of Paltrow’s Emma and Clueless, maintaining many of the pleasures of each, and inventing a few of its own. If I’m honest, the best movie of the three is still Clueless. But Emma. 2020 is handsome, clever, and rich enough to knock its period predecessor off its pedestal and settle in at second place. It’s perfect for a new generation of Instagram-savvy Austen fans—and anyone who enjoys a delightful old story in a beautiful new frame.

Gossip, Sex, and Redcoats: On the Build-Up to the Boston Massacre 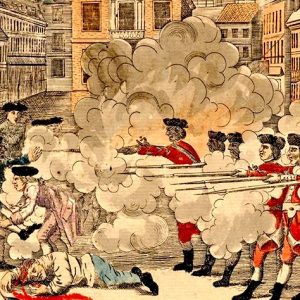 Gossip, Sex, and Redcoats: On the Build-Up to the Boston Massacre

While his comrades in the Twenty-Ninth Regiment were camping on the Boston Common or meeting their new neighbors, Private...
© LitHub
Back to top