If Only It Were All Greek: A Reading List from Mary Norris

From Corfu to Crete, the Comma Queen Shares Her Favorites

“Greek to Me,” from the line uttered by Casca in Shakespeare’s “Julius Caesar”—“It was Greek to me,” meaning he didn’t understand a word—is not the most original title for a book, but it is a popular one. It has been used for textbooks, cookbooks, spiritual narratives, roundups of classical expressions (Eureka, Achilles’ Heel, Zeno’s Paradox), a children’s book about dyslexia, and more than one travel book in which someone, usually an Englishman, buys a fixer-upper in Greece and, like Peter Mayle in Provence or Frances Mayes in Tuscany, hires the locals to restore it. Frustration and hilarity ensue.

This list includes only one book with “Greek to me” in the title and is restricted to books by or about modern Greeks, though the authors may, of course, reflect on ancient history. I have left out the classic Greek-travel writers—the Durrells, Henry Miller, Patrick Leigh Fermor—and all the other writers I mention in my own bid for a spot on the Greek shelf, as well as the best-known writers of fiction (Nikos Kazantzakis), historical fiction (Mary Renault), and fantasy (Madeline Miller), and the great modern poets (Cavafy, Seferis, Ritsos, Elytis), as well as the many scholars whose works crowd my shelves, choosing instead to showcase some of the more unusual finds, whose variety may give the reader an idea of the wealth of books on Greece, by Greeks and philhellenes alike. 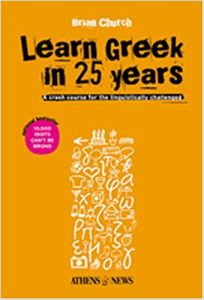 Laugh if you will, but the author of this “crash course for the linguistically challenged” wrote a column in the form of lessons in basic Greek for the Athens News, an English-language newspaper (now defunct). He is, of course, joking, but then again not. Unrequited love forms the subtext. 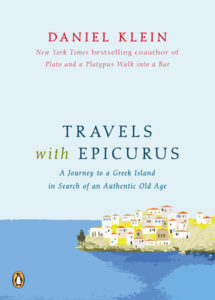 The author, an American, spends time among the elders of Hydra, reading philosophy and studying the old ways—that is, the ways of the old men who spend their days in the island’s coffee shops, twiddling their worry beads and gossiping. This is a gentle book about the prospect of enjoying old age in a peaceful setting (there are no cars on Hydra). 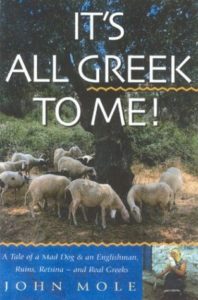 John Mole, It’s All Greek to Me!

A good-humored, self-deprecating take on the genre of owning a house in Greece. The author, who is British, falls in love with the view framed by the window in a goat hut on Evia (Euboea), the long, narrow island to the east of mainland Greece. He is determined to restore the house (his first Herculean task is the labor of mucking it out) to something that will be authentic in the landscape, and the natives take advantage of and watch out for him in equal measure. He ridicules his own attempts at Greek while his wife’s Greek steadily improves, and their kids stick stubbornly to English. 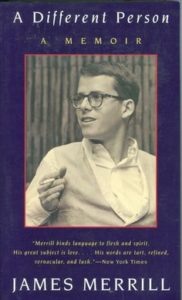 When poets turn to prose, the results are rich, and this fascinating memoir re-creates Merrill’s youth in candid, humorous, lapidary detail, beginning with the custody battle between his parents (he was the son of a founder of Merrill Lynch) and blossoming in the life he finds abroad after he is invited to Greece by the translator Kimon Friar, who had been his teacher in prep school. Reading about the life of a liberated gay poet in Athens (and later Rome) is a voyeuristic feast and sends you back to the poetry with deeper understanding. 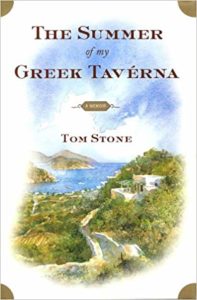 Tom Stone, The Summer of My Greek Taverna: A Memoir

The author took up the challenge of running a restaurant on the island of Patmos, in the Dodecanese, with the encouragement of a local, who just might be stealing from him. The gullible, hardworking Stone longs to be like his mentor, whose life is ease, standing outside the restaurant and beckoning to tourists, but he is stuck sweating in the kitchen, at the cash register, or at home, where his wife disapproves of the whole enterprise. With recipes. 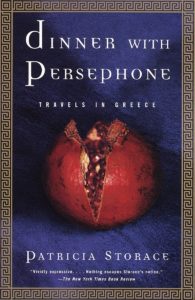 Storace, a poet, spent a year in Greece, and this is her clear-eyed look at the reality, informed by history, mythology, religion, and love of language. 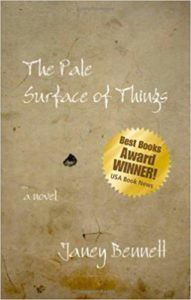 This 2007 novel, set on Crete, follows an archeology student who jilts his fiancée, is saved by a widow and her young son, and crosses paths with an Orthodox priest who is restoring the frescoes in an old church and struggling with his vocation. The remote mountain village is wracked by crime, but lit by human kindness. The book seems to have been written purely out of love. 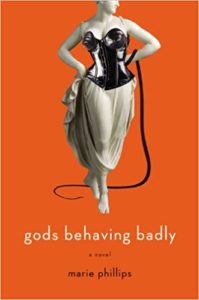 A highly entertaining novel in which the Greek gods, having fallen on hard times, share a flat in London, where they all find occupations that suit them. Artemis is a dog walker, Aphrodite does phone sex, Apollo has a TV show. Ares is a troublemaker, and Dionysus is a lush. Hermes is the peacemaker. Athena is always outraged. There is a plot, too, drawing on the myth of Orestes and Eurydice. 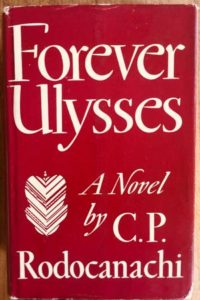 The oddest thing about this 1938 novel, which opens in Cephalonia with its sailor hero shipping out for Egypt, is that it was never published in Greek. Leigh Fermor seems to have translated it for practice. A friend from Cephalonia picked it up at the Strand; stamped inside is the declaration that this is “Another Free Book from the Traveler Restaurant” at Exit 74 off I-84 in Union, Connecticut. The theme of travel continues even in the lives of the books themselves. 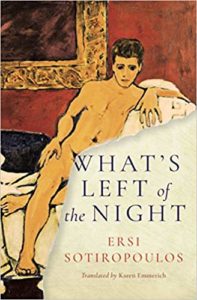 This is a fictionalized account of an 1897 visit to Paris by Constantine Cavafy as a young man, well before he became the author of “Ithaca,” his best-known poem. The translation by Karen Emmerich, who teaches in the department of comparative literature at Princeton, is fluid and sensitive. The homoerotic cover makes it slightly problematic to be seen reading in public. 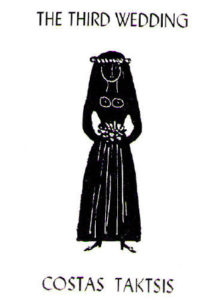 A woman delivers a monologue that gives an in-depth, textured look at day-to-day life in twentieth-century Greece, from the collapse of the Great Idea (that Greece would one day take back Istanbul and Asia Minor) through the Second World War and the Greek Civil War that followed. The narrator is the female equivalent of Zorba—irrepressible—and also Zorba’s opposite: a long-suffering realist on the verge of a third marriage. Every philhellene I know who has read this book rhapsodizes about it. 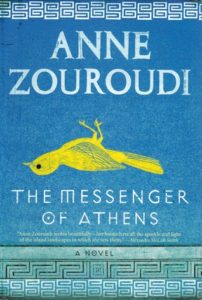 Anne Zouroudi, The Messenger of Athens

Zouroudi, who is from the North of England, is to the Greek islands what Donna Leon is to Venice. Her series features Hermes Diaktoros, a detective known as the fat man—he has been described as the Greek Hercule Poirot—who works in mysterious ways. The books (The Doctor of Thessaly, The Lady of Sorrows, among others) conjure the superstitious atmosphere of the Greek islands.

Mary Norris is the author of Greek to Me and the New York Times bestseller Between You & Me, an account of her years in The New Yorker copy department. Originally from Cleveland, she lives in New York. 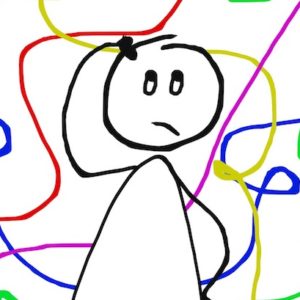 Naming a book is a bit like naming a child. The title is the book’s given name, what it goes by. The author’s byline...
© LitHub
Back to top
Loading Comments...