“If A Clockwork Orange Can Corrupt, Why Not Shakespeare and the Bible?”

Anthony Burgess on the Reception of Kubrick's Film Adaptation

Evelyn Waugh said that change was evidence of life, though that maxim never noticeably softened his stiff opinions. There are beliefs we cling to and will not let go; it must be considered a kind of grace in my old age to abandon a conviction that was part of my blood and bone. I mean the conviction that the arts were sacrosanct, and that included the sub-arts, that they could never be accused of exerting either a moral or an immoral influence, that they were incorrupt, incorruptive, incorruptible. I have quite recently changed my mind about that.

This protective attitude to the arts was really a desire to justify the corrupt elements in the greatest literature of all time—that of the Elizabethan stage. It was a wish not to see William Shakespeare as a violent writer. One play of his we are unlikely ever to see on the stage again, and are totally certain never to see adapted to television, is the tragedy Titus Andronicus. This, with its gang rape, mutilation, cannibalism,

and a final massacre, goes as far as we could expect from the most depraved porno-violence of today: that it is the work of the most highly respected writer who ever lived does not mitigate its cheap opportunism.

Even in King Lear the tearing out of the Earl of Gloucester’s eyes seems a gratuitous sop to the corruption of the viewer (“Out, vile jelly,” indeed). Thomas Kyd made Hieronimo bite out his tongue in The Spanish Tragedy, but this was too improbable an act to be taken seriously; nevertheless, that play is the progenitor of the tradition of the Tragedy of Blood, to which Lear and Hamlet belong. The greatest drama of all time was soaked in blood and crippled with violence.

Of course, it may be said that without violence there can be no drama. A play, even a comedy, depends on opposition, and opposition can be murderous. Opposition has to be resolved, either in mourning or in laughter, and this is what makes plot. The bland novels of Jane Austen, or of Barbara Pym, depend on civilized opposition which can be resolved through reason; it requires immense artistic

integrity to contrive a plot in which opposition sizzles without a blow being struck. Physical violence is the monopoly, at least in our own age, of the inferior artist.

I am now about to rub certain sore places. I have been allegedly as responsible as anyone in the last 30 years for the cult of violence. I published in 1962 a novella entitled A Clockwork Orange, which was more concerned with methods of quelling violence among the young than with the glorification of aggression. Ten years after publication, baffled reviews, and a tiny readership, Stanley Kubrick adapted the book to the screen, rather brilliantly. His version differed from the original in that he emphasized the visual, whereas I had been concerned with converting to sound—specifically, the sounds of an invented language—the clichés of mayhem and murder.

In both book and film the protagonist is, through aversion therapy, changed from an aggression-loving lout into an automaton that vomits at even the thought of violence. The question was asked: is it permissible to kill free will in order to ensure the stability of

society? Not many viewers of the film took notice of the question: most were too excited by the violence to bother about the philosophy of the concept.

As we know, Kubrick, and incidentally myself, were accused of concocting a piece of violent pornography; Kubrick received violent threats from some of the foes of violence; the film was withdrawn in this country, though in no other; because no one here is free to see it, the film has accrued a far worse reputation than it merits. More than anything, a major cinematic artist has admitted to the world that art can be harmful. If A Clockwork Orange can corrupt, why not Shakespeare and the Bible? And, indeed, why

“My argument was that action was anterior to art; that aggression was built into the human system and could not be taught by a book, film or play.”

I remember flying back from New York to London with a couple of valuable plaques awarded by the New York Critics’ Circle and being invited to defend the film on a radio program. Note that the only approaches to the film, then as now, were of attack and defense: a cool aesthetic assessment seemed out of the question.

My argument was that action was anterior to art; that aggression was built into the human system and could not be taught by a book, film or play. If one wished to believe that a book could instigate violence, the Bible could be one’s first choice, and yet this was taken to be the Word of God. Reports had come through from the United

States about gangs of four, fantastically dressed in the manner of A Clockwork Orange, raping nuns in Poughkeepsie and beating up senior citizens in Indianapolis. I continued to deny the possibility of a mere film’s stirring up juvenile mayhem, but I was not being wholly sincere: I was defending William Shakespeare.

From the film of A Clockwork Orange youth did not learn aggression: it was aggressive already. What it did learn was a style of aggression, a mode of dressing violence up in a new way, a piquant sauce to season the raw meat of kicks, biffs and razor-slashings.

A work of art has a magisterial quality about it, a justifying élan which grants virtue to imitation. We know, and do not wish to know, that the story of Abraham’s proposal to sacrifice his son to the Lord God has been a justification of child murders, and that the multiple murderer

Haigh’s drinking his victims’ blood had its origin in a manic devotion to the Holy Eucharist. Possibly a man may see Hamlet and then do what he has put off doing—namely, kill his uncle. Whether The Silence of the Lambs has genuinely promoted cannibalism or the mad butchery of its major villain we do not know. We all bow now, anyway, to the thesis I thought I would never accept—that art is dangerous.

At the time of the Moors Murders, when the killer Brady admitted that he might have been influenced by the Marquis de Sade’s Justine, the late Lady Snow said that if the burning of all the books in the world were necessary to save one child’s death, we should not hesitate to incendiarise (naturally, film would make a better blaze). That goes too far, but I begin to accept that, as a novelist, I belong to the ranks of the menacing. I used to regard myself as a harmless key-basher or pen-pusher.

As much of the fodder of television is film narrative, and it is unleashed on the blasé and the susceptible alike, the question of how far it is likely to corrupt has become urgent. In turning itself into a kind of movie museum, as well as a showcase for low-budget telefilm, the medium has already betrayed something of its initial function. The BBC TV of the 1950s showed plays, not films. The evening’s highlight was Chekhov or Rattigan or even Shakespeare, acted live with intervals. The theater was brought into the drawing room, and the theater never permitted the excesses of the cinema.

In principle—and it is a principle I have been willing to adopt only after 50-odd years—I am for censorship in the medium, but I feel that a public sensitivity towards TV violence has established itself, one that in the senior medium of film is probably prepared to say “Enough—no more.” Some of the cinematic excesses have frightened more than the merely squeamish, and they seem unlikely to be reproduced on the box.

Most of my TV-viewing over the last 20 years has been in France and Switzerland, with occasional sojourns in New York. TV is, as the world knows, best in Britain, but there is no vast division in quality whether one crosses the Atlantic or the Alps. World television is homogeneous, meaning crammed with harmless American sitcoms. It is given to blandness, like breakfast food, and its faults lie not in the administration of the sharp jabs of violence or the stimuli of sex as in the recognition that television is a demotic medium and may as well be vulgar as not. As a mere visitor to Britain I am appalled by the vulgarity of the commercials that pay for what comes before and after, by the debasement of speech, by humor so anally based that one blushes. One longs for the old days—the one BBC channel, the leisured presentation, the potter’s wheel, Muffin the Mule. Now the urge to cram every minute with chromatic fodder is bound to draw on cheap violence. But I do not think there is anything to fear. The danger of television especially when its standards are virtually established by commercial interests, is that it is an agent of social degradation. This is far more frightening than the prospect of A Clockwork Orange getting to the 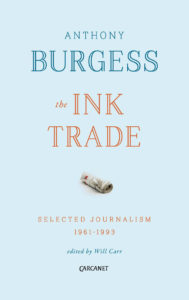 From The Ink Trade: Selected Journalism 1961-1993. Used with permission of Carcanet Press. Copyright © 2018 by Anthony Burgess.

Anthony Burgess (1917–1993) was a novelist, poet, playwright, composer, linguist, translator and critic. Best known for his novel A Clockwork Orange, he wrote more than sixty books of fiction, non-fiction and autobiography, as well as classical music, plays, film scripts, essays and articles. The Ink Trade is a collection of his journalism from 1961–1993. 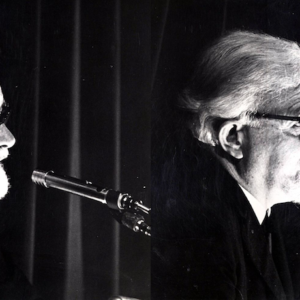 After the parties, after the drinks: the tiny Venetian island where Hemingway went to write. | Lit Hub From Star...
© LitHub
Back to top
Loading Comments...