Tom Bouman on the Use of Man-Eating Bears in Fiction

It was the cocktail hour of my wedding. I had escaped and was waiting for a port-a-john out by the woodpile. The bear was about 200 yards away, walking a border of hayfield and forest. I hadn’t seen it step out of the trees, but it was unmistakably of the woods, a living shadow. It raised its head to look at me and then slowly moved along. I wondered if it had lived near my parents’ old farmhouse for some time, undetected, now dislodged by the loud music and people. Or it may have been drawn by the scent of the wedding feast. I had not seen many bears in the wild. Its legs were longer than I would have imagined; given room to move and some distance, the bear seemed to glide above the field’s surface.

Bears have been on my mind lately. As the author of a mystery series set in the hills of northeastern Pennsylvania, I have called upon many wild animals to appear in my novels. In my world, animals are everywhere, and everywhere they are in contact with people. At times I wish that the circumstances weren’t so bloody and grim. In one book, turkey vultures plunder a human corpse. In another, an innocent bat meets a brutal death at the sharp end of a crowbar. In my current work-in-progress, an ursus americanus is a murder suspect of sorts. So it must also be a character, and a major one. But how do you bring an animal to life if you can’t get near it?

The literary bear of the moment is Mord, from Jeff VanderMeer’s strange post-apocalyptic novel Borne. Mord is not an animal from our shared reality; it is a stories-tall, flying kaiju. It also appears to be a metaphor for the destructive force humanity exerts on the world. Plus, Mord is described as golden-brown, like a grizzly, a predator, not a sweet black bear. Mord fine, Mord good—but not for me. I’m not talking Watership Down, either—strange things happen in my novels, but the mode of my series is essentially realist with currents of folklore. I can’t rely on animals to explain themselves to the reader. They have to be who they are, free of the burdens of device and fantasy.

My bear will have to live in a back-country increasingly pinched by human habitat. Of real-life black bears, my Peterson’s Reference Guide to the Behavior of North American Mammals says:

American black bears are distinctive among North America’s large carnivores because of the intensity with which they interact with humans. Given the millions of interactions between people and Black Bears in dumps, campgrounds, suburbs, and the backcountry across North America each year, the rarity of bear attacks only confirms how tolerant and restrained they are, even in the face of human intrusion. Most reported attacks occur when people are crowding and feeding bears and involve bluff charges and displays rather than physical contact. Bears are solitary creatures and not accustomed to touch. Do not give in to the temptation to touch a habituated bear, for it may swat at you as it would any bear that violated etiquette.

Black bears have etiquette. That’s a start. They also seem grouchy and shy. I like them more and more.

A recent news item from my hometown: “DEC Monitors Kirkwood for Bear with Stuck Jug [on its Head].” Not too long ago, I was that bear. I felt for him. It may be that we’ll see more of these little tragedies as bear populations increase and come into more frequent contact with people and their garbage. After all, black bear population density is increasing alongside humans. The Ithaca Journal reported that it has grown to one bear per every three square miles along the Southern Tier of New York State.

Even with all of this cohabitation, bears are patient with us—attacks on humans are rare, but not nonexistent. I need to know about the ones who attack.

Dr. Jane Huffman and Nicole Chinnici run the Northeast Wildlife DNA Forensics Laboratory in East Stroudsburg, Pennsylvania. After a wildlife attack, their lab is often asked to conduct forensic analysis to establish the animal’s identity so that the right one can be removed from the population. From Huffman and Chinnici, I learned what the end of my bear’s life would probably be like—it might be trapped, and it would almost definitely be shot at the hands of a conservation officer or policeman. But what about a more innocent time, before the bear ran afoul of people?

When I asked Huffman over the phone how I should go about characterizing an ursus americanus for the purposes of a mystery novel, she reasonably sidestepped the question and turned to science: genetics, speciation, morphology. “Their skull shape,” she said. “Hair. You can tell a lot from hair.” In the lab itself, which is home to two handsome, stuffed black bears, I discussed a black bear’s life with Chinnici. “A bear is about eating, mating, and sleeping,” she said. Obviously, bears are attracted to the food in human garbage, and the degree of attraction depends on how good the berry and acorn crop is. On the subject of mating, I learned that mother bears are capable of delayed egg implantation, meaning that a litter of cubs can have more than one father. The fathers do not stick around. I tried not to judge.

Stephen Herrero is an ecologist, a doctor of animal behavior, and an expert on bear attacks. In an article for The Journal of Wildlife Conservation, he and other scholars analyzed data from fatal black bear attacks on humans between 1900 and 2009. There have been at least 63 such attacks, though spread out over more than a hundred years, the statistical risk to humans is small. Herrero’s paper was helpful in understanding black bear behavior generally, and the behavior of bears who kill people specifically. Fatal attacks per decade have increased over time, with 86 percent of them occurring since 1960, which, again, corresponds to an increase in the human population, and a concomitant increase in species interactions.

Contrary to received wisdom, mother bears with cubs typically do not attack humans; to protect their personal space, they will swat the ground, huff, and charge, though this will not usually result in actual, physical contact. No, it’s the solitary male bears who account for 92 percent of fatal encounters with humans. Fatal black bear attacks are more eerie and silent than roaring and obvious. Bears who kill humans do so through predation, which Herrero et al says includes “searching, following or testing, attacking (capturing), killing, sometimes dragging a person, sometimes burying them, and often feeding upon them … vocalizing and stress behaviors by the bears were usually absent.” In the overwhelming majority of fatal attacks, survivors in the party did not detect the bear until it was less than 50 meters away. And just like in film and TV, bears who have killed a human are more likely to do so again. “Such bears appear to be strongly motivated, as if a switch had been thrown,” writes Herrero et al. Bears may transition from frequent dumpster-diving to more predatory behavior. The majority of attacks occur in August, when bears are bulking up for denning and a winter of torpor.

All right—that gives me a general outline for my bear’s life. Animals are motivated differently from us in some respects, and wild beasts cannot be yoked to any kind of moral system or understanding. But like any human I include in a novel, I still have to search those motivations and explore the character’s past life. It takes some research and educated guesswork to understand a bear on something like its own terms.

I’m probably thinking about a solitary male who has been seen around the town’s dumpsters. He may have fought other bears for his territory, or been driven closer to human habitat. He may have become bolder in his search for human food. He is an omnivore who loves delicious berries, fruits, acorns, and insects. He enjoys mating but not any other part of fatherhood, and he likes to sleep. But is he a man-killer?

At the risk of anthropomorphizing my ursus americanus, I’d like to give him a name: Crabapple. That’s a name my human character, Officer Henry Farrell, would give him. Let’s say—and I’m sorry—let’s say there is a human corpse, and this bear has been eating it. Bears also eat carrion, so someone else may have killed the man. As Crabapple rambles through the mossy, brambly forest of my mind, I do have to make an essential choice: is he, like most black bears, an opportunist who happened upon the wrong human at the wrong time, and was undone by his gluttony? Or has he developed a taste, and learned to see us as his prey? It’s actually a question of character.

When a Bookseller Tries to Buy a Bookstore 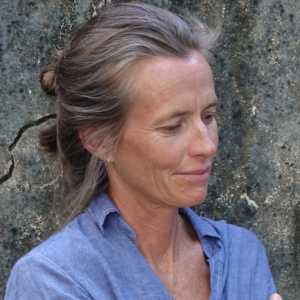 What was the first book you fell in love with? Arthur Ransome’s Old Peter’s Russian Fairy Tales. My mother read those...
© LitHub
Back to top