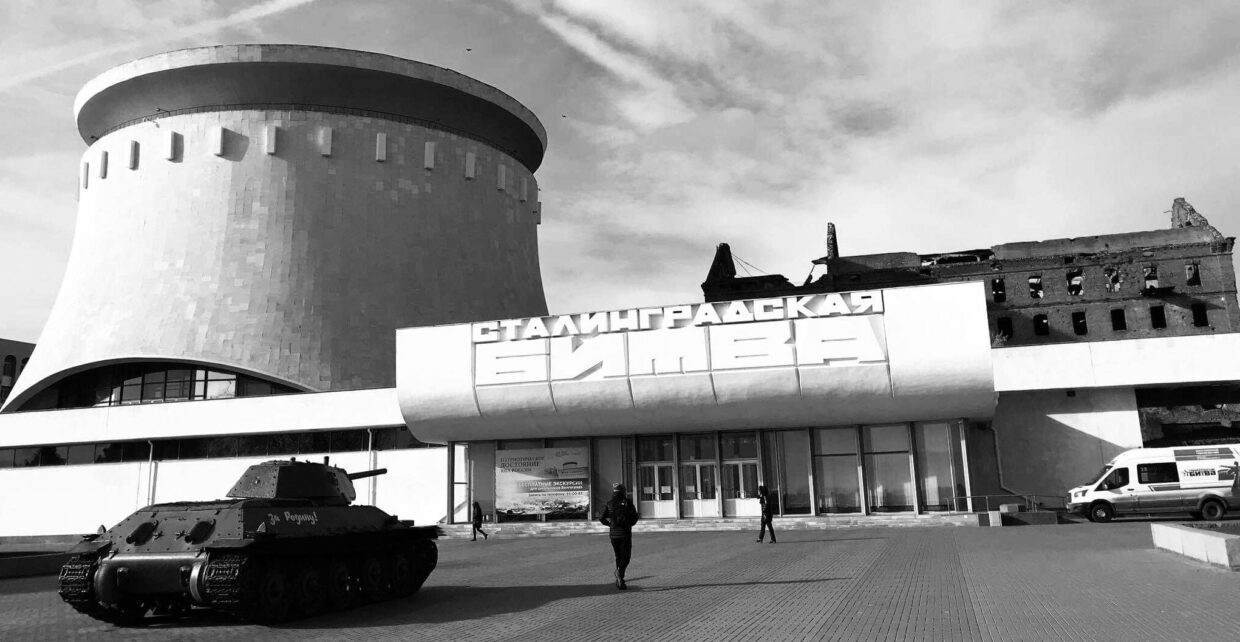 “I always wish to get under the skin and discover the smell, the terror, the relief and the joy ordinary people felt.”

“No one ever comes to our archives, not even Antony Beevor!”

This was how the director of the Panorama Museum greeted me. The museum, which overlooks the majestic River Volga, was built in the 1950s during the Nikita Khrushchev era and commemorates the epic battle for the city when it was known to the world as Stalingrad—the site of Hitler’s greatest defeat in WWII. The highlight of the museum is the enormous 360-degree mural, over twenty foot high that brings to life in vivid depiction the key moments of the five-month-long battle. It takes the visitor’s breath away in its enormity.

As a historian and writer of WWII and Cold War history, I was beyond pleased to be invited by the museum in the winter of 2019 to research the battle in their archives. I was traveling during the first lockdown affecting the United Kingdom, and to allow me to travel out of my country the museum had supplied the documentation for me to be granted a travel visa. The journey had involved a quite surreal flight out of Heathrow terminal 5 which was completely empty with only a handful of flights, one of which was mine to Moscow. From there I flew on a packed plane, filled with oil and gas workers going back to the Caucasus a thousand kilometers to the south of the Russian capital, and arrived in Volgograd where the temperatures would hit -20 at one point of my stay.

I relish the research challenge of identifying and figuring out how to utilize the voices I will need to accurately construct a fresh and page-turning narrative.

Since Panorama Museum’s inception in the late 1950s, it had undertaken an extensive campaign to make contact with thousands of veterans of Stalin’s Red Army who had fought for the city in 1942-43, and request that they record their experiences and memories of the hellish defense of the city from Adolf Hitler’s Sixth Army as it attempted to fulfill his ambition to capture Stalin’s showpiece city.

Over the decades,  through the Cold War and into the rule of first Boris Yeltsin and subsequently his murderous successor Vladimir Putin, the museum staff collated these testimonies. When I arrived, I was presented with was hundreds of green school books and folders containing letters, photographs and diagrams. Each was carefully wrapped in paper and stacked in several piles awaiting my arrival. The museum had personal recollections from the men and women of all different ranks and units who had served in the battle for Stalingrad. Sorting through all of their words was quite a daunting task, but I was fortunate to have with me a Russian translator to provide the insight as to what would be worth analyzing and then including in my book.

My background as a publisher of history books has afforded me the privilege of working alongside some of the English-speaking world’s finest historians, including Simon Schama, William Taubman, Michael Wood and Max Hastings. What has always inspired me as an editor, has shaped the path I chose as a writer: oral history. I relish the research challenge of identifying and figuring out how to utilize the voices I will need to accurately construct a fresh and page-turning narrative. The big, strategic-based titles that tell the stories of these huge historic events are of course important, but I always wish to get under the skin and discover the smell, the terror, the relief and the joy ordinary people felt during this cataclysmic period. That was the reason I was sitting in a cold basement beneath the museum that week, methodically going through file after file. 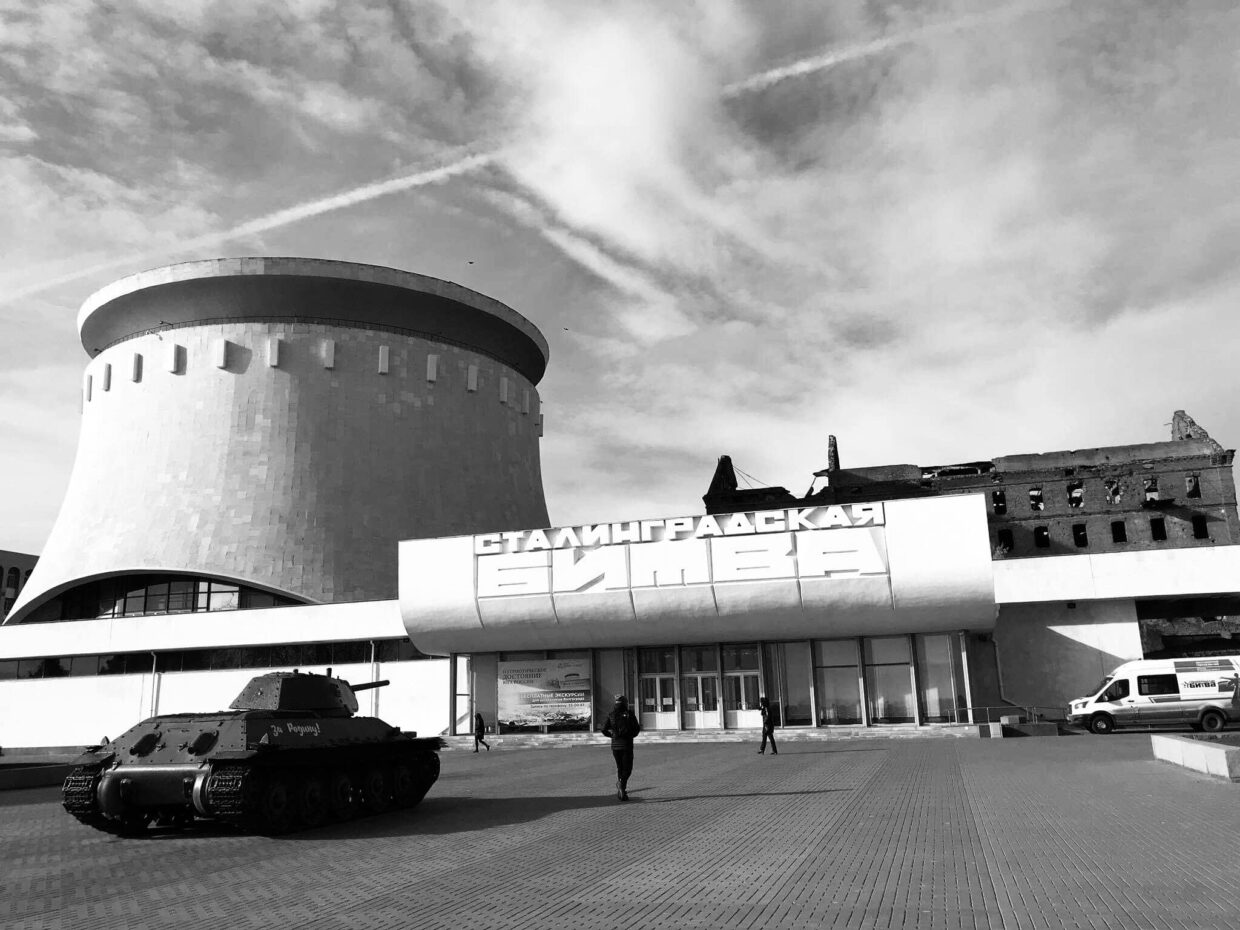 The resulting book, The Lighthouse of Stalingrad, focuses not on the overall battle for the city, but rather the fight for just one house within the heart of the city between two opposing units. To use one house as a metaphor for the whole battle, I researched the legend of a building within the heart of the city that to today’s Russian is as dear as the Alamo is to an American, or Verdun is to a French person: “Pavlov’s House.”

“Pavlov’s House” is a four-story apartment block that German bombardments reduced to a ruin, but unlike ninety-per-cent of the city was not turned to rubble. It stood in No Man’s Land between two key units, both of which had seen more than their share of fighting since Hitler’s invasion: the 71st Infantry Division, and the Red Army’s 13th Guards Rifle Division. The house offered excellent views of the city in all directions and thus was a key strategic point to capture and use for artillery spotting.

Sometimes the journey to get to the truth of your story can throw you a curveball when an even bigger story, or character, simply lands in your lap.

Therefore, both sides fought to have it. Pavlov was a simple sergeant who was tasked to capture the building in question. The legend passed down to millions of Russians thereafter is that his division succeeded and a platoon of men (hailing from every republic within the old Soviet Union) proceeded to defend the house for 58 days against a whole German division. Their story was captured by a Soviet war correspondent and within days had been circulated around the country, and Pavlov himself turned into a national hero—until his death in 1982. The building had been codenamed “The Lighthouse.” My task was to dig into the archives and unearth the evidence in the form of dozens of eyewitness testimonies from the men who had served on the frontline in the city, or fought in the actual house.

I also needed to get the German opposing view which involved a different angle to my research. The 71st Infantry Division opposite Pavlov’s House hailed from Lower Saxony in Southern Germany. I posted newspaper adverts in the local press requesting any families with relatives who had served with them to contact me. I received approximately thirty responses, six of which were good enough to include in my book.

One was actually a treasure trove—it came from the son of a commanding officer who survived the battle, served twelve years in Russian gulags, came home to West Germany in 1955, collected his memoir and photographs together and then committed suicide on Christmas Day, 1956. No one had looked at this material until his son sent it to me. That officer is now one of the key characters in the narrative and reveals a quite different set of memories from the accepted storyline in the majority of Stalingrad titles that have been published, Antony Beevor’s included.

The job of an historian is to undertake the ‘hard yards’ of relentless research, but sometimes the journey to get to the truth of your story can throw you a curveball when an even bigger story, or character, simply lands in your lap. Then, your job becomes assessing and verifying the story, and figuring out how to bring it into the ever-evolving historical record. 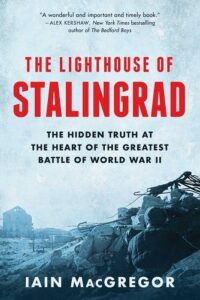 The Lighthouse of Stalingrad: The Hidden Truth at the Heart of the Greatest Battle of World War II by Iain MacGregor is available from Scribner, an imprint of Simon & Schuster.

Iain MacGregor has been an editor and publisher of nonfiction for over twenty-five years. He is the author of the acclaimed history of Cold War Berlin: Checkpoint Charlie. As a history student he visited the Baltic and the Soviet Union in the early 1980s and has been captivated by Soviet history ever since. He has published books on every aspect of the Second World War on the Eastern Front 1941-45 and has visited archives in Leningrad, Moscow and Volgograd. He is a Fellow of the Royal Historical Society and his writing has appeared in the Guardian, the Spectator and BBC History Magazine. He lives with his wife and two children in London. 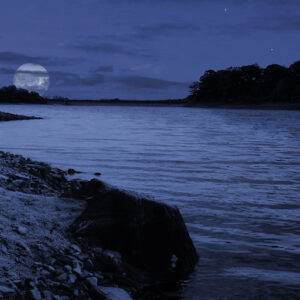 Translated by Robin Myers Through a series of interconnected monologues, Proyecto Manhattan sets a polyphonic scene, populated...
© LitHub
Back to top
Loading Comments...