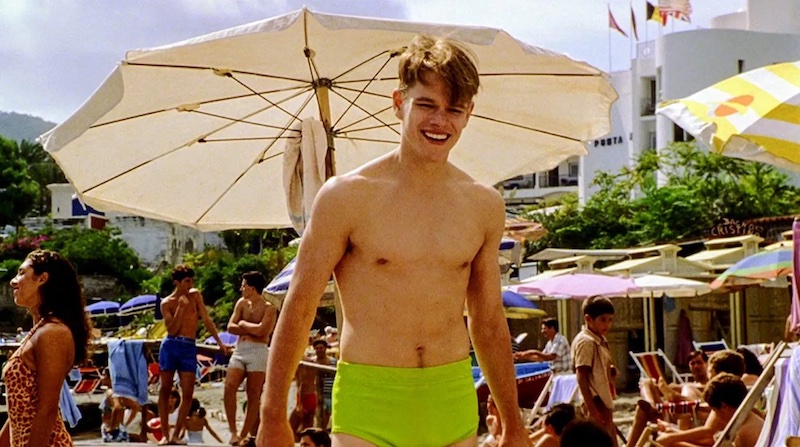 I think about this tiny detail from The Talented Mr. Ripley all the time.

I love every inch of The Talented Mr. Ripley. I think every writer should read it—mostly because it’s a pleasure from start to finish, but it doesn’t hurt that there is so much to learn from Patricia Highsmith about pacing, stakes, and most of all, character. (Everyone always tells you that plot follows character, but in this novel, the two are more entwined than in almost any other I’ve read.) But while I think the whole book is basically perfect, it is a single small moment, almost a throwaway description, encapsulated in a single sentence, that I think about all the time.

First, a little context for where we are in the novel when this moment comes along. In broad strokes: small-time con artist Tom has come to Italy to meet Dickie Greenleaf, ostensibly on a mission for his father (to convince Dickie to come back home and join the family business), but with a few ideas of his own. Either way, his first goal is to ingratiate himself to Dickie, whom he finds on the beach in Mongibello—a beach for which Tom is not at all prepared. He manages to buy a swimsuit, “a black-and-yellow thing hardly bigger than a G-string” (in the movie, as you can see above, it’s a slightly less risqué cut and an actually pretty cool lime green), but not sandals. As he looks around at the “bronzed adolescent Italian boys,” he is “mortified at the big brown shoes on his feet and at his ghost-white skin.” After all, “he had not been to a beach all summer. He hated beaches.”

Dickie, who is very tan, is more or less indifferent to Tom’s approach, though they have lunch together, and Tom must withdraw and prepare to try again. Having only just arrived in town that morning, he gets a room at a nearby hotel, the Miramare. Once there, there’s a strange and subtle turn, which starts like this:

The voices of some Italian boys who were talking under his window drifted up as distinctly as if they had been in the room with him, and the insolent, cackling laugh of one of them, bursting again and again through the pattering syllables, made Tom twitch and writhe. He imagined them discussing his expedition to Signor Greenleaf, and making unflattering speculations as to what might happen next.

What was he doing here? He had no friends here and he didn’t speak the language. Suppose he got sick? Who would take care of him?

First: here we have those Italian boys again. The pitch of his reaction—twitching and writhing, in response to a kid laughing outside—gives us a sense of his tendency towards extreme reactions (especially where bronzed boys are concerned) and the apparent intensity of his sympathetic nervous response. The paranoia—why would they be talking about him?—is almost as insane. His worry about being alone in a foreign country is understandable enough, but in the very next sentence, it’s as if he conjured up an illness for himself:

This may be simply an acknowledgement of the stomach problems that were once a regular danger of international travel (different bugs in the water or something—later Dickie even asks if he had “the usual upset stomach”). But Tom’s meticulous self-control—and the times when he loses it—and more importantly, his self-creation, is such an important part of this book that it’s hard, several readings in, not to see Highsmith’s subtle weight here. But still, this is not the part I think about all the time. The part I think about all the time is this, which comes at the top of the next chapter, three days later, at his next meeting with Dickie. He underplays his illness to Dickie, but Highsmith tells us:

He actually had been too weak even to leave the hotel, but he had crawled around on the floor of his room, following the patches of sunlight that came through his windows, so that he wouldn’t look so white the next time he came down to the beach.

I mean, come on. Who would even think of this? It’s so pathetic. It’s so pathetic, and so determined, and so visually striking, even without much in the way of descriptive language: I can just see him there on his back, sick as a dog in his G-string, groaning as he follows the sun on the hotel room floor. It is embarrassing, but it makes you love him, because it’s hard (for me) not to love characters who want so badly and so nakedly. Tom wants to be tan, like Dickie, and like the Italian boys. He wants Dickie to love him. (By the way, he only just met him.) He will torture himself to get these things. For me, this is the brilliance of Patricia Highsmith: in a single sentence, she shows you just exactly who Tom is. That’s about as magical as writing can get.