Sophie Wilson on the Liberation Looks Inspired by Orlando

“I am resigned to my station among the badly dressed,” Virginia Woolf confided in her diary in 1919. She may be surprised, then, to find her name reappearing time and time again in the show notes from some of the world’s biggest fashion houses more than a century later—and also, possibly, privately delighted, for fashion fascinated her.

Woolf had more than just a general interest in fashion; she described her conflicting relationship with clothes as “frock consciousness,” an awareness that contained the dual pleasure and horror of being perceived. In her work, she explored how it shapes our understanding of gender and vice versa, posing questions that are still pertinent today. In her 1928 novel Orlando, Woolf writes that “clothes are but a symbol of something hid deep beneath.” She examines how gender and fashion can craft new identities, shape one’s status and be tools of both liberation and restriction. These reflections are deepened by what we know of her personal life and sexuality, including that she wrote about her love for women at a time when she could not openly live as a lesbian. Her famous love affair with Vita Sackville-West, to whom Orlando is dedicated, helped inspire the novel.

Attitudes toward gender, in both fashion and society, have changed significantly since Woolf’s time. In a 2016 J. Walter Thompson study, 78 percent of 300 Gen Z participants agreed that gender no longer defines a person as much as it used to. Last year, Harry Styles wore a dress on the cover of Vogue; Billie Eilish’s signature baggy style proves overt femininity is no longer a prerequisite for mass appeal as a woman in music. The way we view clothing and gender is shifting, and few literary figures have been deployed in the fashion world to signify that shift as many times as Woolf’s time-traveling androgynous hero, Orlando.

Orlando’s most recent reincarnation was orchestrated by Kim Jones in his debut couture collection for Fendi. Jones, who has collected multiple editions of Orlando, spent his childhood going on school trips to Charleston Farmhouse, the Bloomsbury Group’s Sussex retreat. Jones cites Woolf as, “incredibly modern—independent, living her life how she wished.” The collection was informed by the dual origins of Fendi and Orlando—the house was founded in 1925 and the novel published in 1928. A coed cast showcased iridescent suiting and dinner-jacket evening-dress hybrids, speaking to the fluidity of gender in Woolf’s text.

Of course, Jones is not the first designer to show an affinity with Orlando. For Givenchy Spring/Summer 2020 couture, Clare Waight Keller was influenced by the love affair between Woolf and Vita Sackville-West that inspired the novel: cue poetic tailoring and romantic florals capturing the delicate beauty of English country house gardens. In 2016, Christopher Bailey’s first gender-fluid collection for Burberry featured Elizabethan ruffle detailing and drummer boy embroidery alongside gender neutral trenches, flitting between the past and the present and between male and female, much like Orlando does in the novel. This collection was followed by an installation at Makers House, with actors reading extracts from Orlando and visuals that immersed the audience further in the time-traveling, gender-shifting universe.

Woolf had more than just a general interest in fashion; she described her conflicting relationship with clothes as “frock consciousness,” an awareness that contained the dual pleasure and horror of being perceived.

“Vain trifles as they seem,” Woolf writes in Orlando, “clothes have, they say, more important offices than merely to keep us warm. They change our view of the world and the world’s view of us.” Nowhere is this more apparent than on the global fashion stage that is the Met Gala. Sadly, 2020’s Orlando-inspired “About Time: Fashion and Duration” became the theme that never was. We will never get to see how Rihanna’s theatrical dedication to the theme would apply to an interpretation of Woolf’s romantic hero. We can only dream of what could have been: 18th-century robes à la Sally Potter’s 1992 adaptation? A new take on embroidered Elizabethan breeches? Hybrid gender-blurred tailoring?

The unbridled freedom of the Met Gala allows the imagination to run riot. Its anything-goes approach to fashion, however, is by no means reflected in everyday life. Many take for granted that the clothes they wear match their gender identity but, for some queer and trans people—Orlando has been called “the first trans English novel”—being accepted in the clothing that feels most natural can be a struggle. Fashion is often a lifeline for trans and gender non-conforming people but, for those who use style to express their identity, sometimes even walking down the street can be dangerous, while the alternative—dressing in clothes that increase gender dysphoria—is also bleak.

In Orlando, Woolf acknowledges the heavy weight that clothing can bear on the mind. She explores the reality that clothes, not merely material items, impact the way we feel about ourselves and the world around us. “There is much to support the view that it is clothes that wear us and not we them,” she writes. “We may make them take the mould of arm or breast, but they mould our hearts, our brains, our tongues to their liking.”

Indeed, the restrictive garments of the 19th century have a repressive impact on Orlando’s mind. She becomes modest, vain, fearful, and seized by a desire for marriage while “dragged down by the weight of the crinoline which she had submissively adopted…her muscles had lost their pliancy. She became nervous lest there should be robbers behind the wainscot and afraid, for the first time in her life, of ghosts in the corridors.”

Woolf’s lover, Sackville-West, also felt oppressed by the limits of womenswear. In her autobiography, which was left behind at her death in 1962 and published posthumously in Portrait of a Marriage, Sackville-West explains how in 1918 she started dressing as a man that she called Julian to appear in public with female lovers (something she did many times). She viewed Julian as the sartorial representation of what she called her “sexual duality” and wrote that, “the extraordinary thing was how natural it all was for me.” Through Julian she found “emancipation… liberty… ambition… attainment,” and she began dressing as him even when she went out alone. What began as a way for Sackville-West to disguise herself so she could escort her female lover undetected became a means for her to experience feelings of freedom that were in many ways denied to women at the time.

Woolf acknowledges the heavy weight that clothing can bear on the mind. She explores the reality that clothes, not merely material items, impact the way we feel about ourselves and the world around us.

Today, a woman in a suit is no longer shocking to many people. Most menswear garments have been integrated into womenswear. Styles that would have been controversial at the time Woolf was writing Orlando are now unremarkable. However, there is still a long way to go to break down the restrictive frameworks of menswear and womenswear. As radical as Woolf’s representation of gender might have been in her time, nearly a century later, fashion’s interpretations of Orlando feel somewhat conservative. As a canonical upper-class white woman’s novel, it’s a safe cultural reference point. Brands can play with gender-fluidity within a framework that does not transgress any white middle-class perceived boundaries of taste. While conversations about gender expression are pushing fashion forward, the global heritage brands that draw from Woolf, using the aesthetics of Orlando to sell clothing, are not leading these conversations. It can be hard to see these references to Orlando as much more than cultural posturing.

Instead, the brands imagining a more radical gender-fluid future tend to be younger and independent, like Telfar, Eckhaus Latta and Gypsy Sport, among others. These labels don’t need to look to the past for literary inspirations; their influences are all around them, in their communities of contemporary queer artists who live and dress authentically.

As someone who felt simultaneously entrapped and enthralled by fashion, it’s possible Woolf would have a similarly contradictory, quizzical response to the likes of Fendi, Givenchy and Burberry taking inspiration from her work. “I am giving up the hope of being well-dressed,” she lamented in one journal entry. In her lifetime, Woolf might have despaired over her “frock consciousness,” but Orlando has become a contemporary style influencer in its own right.

Sophie Wilson is a fashion and culture journalist whose writing has appeared in titles such as Vogue, Vice and W Magazine. She currently lives in the UK and studied English Literature at the University of Sheffield before going on to receive a Masters in Fashion Journalism from Central Saint Martins. 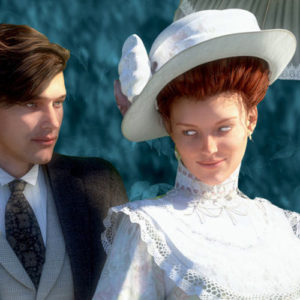 When a book passes into the public domain, it means not only that it's available for adapting and remixing, but for reprinting...
© LitHub
Back to top