“Are you seeing this?!” My 65-year-old Tunisian father was worked up, in a good way. It was January 2011: he was in Washington, DC, and I was in Lyon, France, and the Arab Spring was about to erupt. In the background, I could hear his television, like mine, streaming images of Tunisians swarming the streets to protest the corrupt regime of longtime President Zine el-Abidine Ben Ali. In power for twenty-three years, his portrait omnipresent on city billboards and living room walls, Ben Ali’s ouster would prove monumental even beyond Tunisia.

A few weeks earlier, on December 17, 2010, a Tunisian street vendor named Mohamed Bouazizi had set himself on fire after being harassed by city officials, triggering mass civil protests. Bouazizi wasn’t the first to express his rage—Tunisians’ discontent had been brewing—but his self-immolation sparked the revolt. A fire that spread to Egypt, Syria, Libya, Yemen, and Bahrain.

In the wake of the uprising, a flood of nonfiction books poured out from and about Tunisia—political analyses, theoretical texts, and first-hand accounts of the events. Fiction by Tunisian writers analyzing the era was slower to come. Many of the literary works that eventually emerged were retrospective, depicting the pre-Arab Spring period; others were more political, and more critical, giving voice to decades of growing unrest.

I’ve been paying particular attention to the latter category in recent years, and specifically to those works written in French. All the while, I’ve remained conscious of a Western fixation on identifying so-called “Arab Spring literature” and the attendant risk of conferring political symbolism to a work and, more broadly, of conflating disparate literary traditions (Tunisia does not equal Egypt does not equal Syria). But, as a reader, as a literary translator, and as a Tunisian-American, I was and am curious to see how Tunisian writers are processing and portraying such a critical juncture in their country’s history.

In 2017, I happened upon a review of L’amas ardent (The Ardent Swarm), a French-language novel written by the promising young author Yamen Manai. Published by the Tunisia-based Éditions Elyzad, a deliberate choice by Manai to ensure accessibility to a Tunisian audience, the novel garnered a number of prizes, including Tunisia’s prestigious Prix Comar d’Or. I asked my father—long accustomed to my requests for Tunisian treats and, more recently, books—to bring me back a copy from his annual summer trip. He did, the compact yellow volume tucked inside his suitcase among jars of fig jam and a large container of my favorite Tunisian pastry, makroud. I devoured both, telling myself, this was a novel I needed to translate.

Bouazizi wasn’t the first to express his rage—Tunisians’ discontent had been brewing—but his self-immolation sparked the revolt. A fire that spread to Egypt, Syria, Libya, Yemen, and Bahrain.

Set in an unidentified but unmistakably North African country, The Ardent Swarm tells the story of Sidi the beekeeper, a longtime recluse who is reluctantly drawn back into the world of men when his cherished honeybees are massacred by ferocious hornets. In search of the culprits (animal and man), the beekeeper finds a world quite different from what he remembered. In the novel, the bees are allegorical stand-ins for Tunisians, and the hornets for the wave of Islamic fundamentalists vying for influence after Ben Ali was deposed.

I’ve read numerous think pieces about the failed promises of the Arab Spring, and specifically Tunisia’s struggle to restore economic stability, quell the rise of imported radicalism, and fulfill the impossibly high expectation to serve as the regional model of democracy and prosperity. (Tunisia is still struggling, by the way.) In these narratives, Tunisia’s uprising is often reduced, as academic Haythem Guesmi recently noted, to “a story of success or failure.” It’s not so simple, of course. In The Ardent Swarm, Manai offers a more nuanced picture of post-uprising Tunisia.

Sidi and the inhabitants of the isolated village of Nawa, the Nawis, find their lives upset by extraordinary events, caught in a power struggle between secular and Islamist parties. Economic recovery is slow, even as foreign powers vie for the country’s natural resources. Manai’s cautionary tale isn’t just political; it has strong ecological undertones. He underlines the dangers of a world modernizing too fast, too recklessly, with little heed to the natural order.

The Ardent Swarm takes an amalgam of complexity—religious indoctrination, fanatical violence, geopolitical manipulation, climate change—and makes it accessible. The novel is wry and cautiously hopeful, abundant with endearing characters and compelling villains. And it never feels like a history lecture or worse, a morality lesson.

But most importantly, to me at least, it has—spoiler alert—a happy ending. Or mostly happy: Manai shows his readers how Tunisia once was, but also what it could be.

As a literary translator, I shouldn’t care how a story ends. Or at least not beyond any potential linguistic or stylistic obstacles. But with this one, I wanted to translate—and thereby share with an English-speaking audience—a tale of, if not a triumphant, flourishing Tunisia, a country well on its way. I have family there. Their lives were upset by extraordinary events. They are struggling too, still.

I’ve read numerous think pieces about the failed promises of the Arab Spring, and specifically Tunisia’s struggle to restore economic stability, quell the rise of imported radicalism, and fulfill the impossibly high expectation to serve as the regional model of democracy and prosperity.

Manai and I were both born in Tunisia, only a few years apart. But from there our paths diverged—mine to the United States and his to France. I’ve returned to Tunisia often since leaving as a child, to stay in touch with my relatives, most of whom speak French, and to maintain a connection that felt fragile, in need of tending. A visit was set for the summer of 2020, to coincide with my father’s annual trip and the end of Ramadan. Cancelled, inevitably, because of COVID.

The distance from Tunisia is greater for me, in many ways, than for Manai. Yet I like to think that when he imagines a cofan overflowing with cactus fruit, or a Tunisian fish market, or the slap of scopa cards on a café table, he and I are seeing, or smelling, or hearing the same thing.

As I was translating The Ardent Swarm, I felt a jolt each time I reread the scene describing the arrival of a convoy of Islamists to Nawa—a memory of my first trip to Tunisia after the Arab Spring, in the summer of 2014. To Grombalia, the once small town where my father grew up, and where, as in Nawa, the sight of Salafists sporting heavy beards and long tunics is a new occurrence. More women were wearing veils than in previous trips, including my aunts, and so I carried a makeshift veil in my purse just in case.

And in Sidi, the gruff, aging apiculturist whose cynicism belies an unspoken belief that good will triumph over evil, I saw my father, my forever bridge to Tunisia—genetically, logistically, and culturally.

In a recent translation grant application, I was asked to describe my professional focus. I wrote of my interest in North African literature and in the dueling linguistic influences of French and Arabic. I noted that I was particularly drawn to narratives by Franco-Maghrebi authors, and the emotional urgency driving these voices from the margins, or rather, the middles. But I confessed nothing of my own drive: to relate, to understand, to connect. No mention that my connection to Tunisia inevitably seeped into my translation, making it—I firmly believe this—all the richer.

After seven years searching for a book that resonated with me as strongly as The Ardent Swarm, one year pitching it to publishers, and one year translating it, of course I left some pieces of myself behind. A name, notably. Sidi isn’t the original moniker of Manai’s beekeeper. It’s a substitute that I adopted for semantic, phonetic, and contextual reasons, with the author’s approval. As it happens, Sidi is also the Arabic honorific used to address my father in Tunisia.

The book’s publication in English coincides with the ten-year anniversary of the Arab Spring. My hope is that it will invite reflection on the extensive political and cultural ramifications of that movement. Manai is more realistic, perhaps; he told me that he would be happy enough if his novel helped readers identify Tunisia on a map.

After seven years searching for a book that resonated with me as strongly as The Ardent Swarm, one year pitching it to publishers, and one year translating it, of course I left some pieces of myself behind.

I received the galleys of The Ardent Swarm well into the pandemic, once it was clear that my visit to Tunisia would be delayed not by a few months but by a year or more. The cover of the book is bright yellow, like that of the original French novel. I expect it will tuck nicely inside a crammed suitcase, too. Holding the final, paper version of my translation prompted a mixture of emotions—pride, relief, anxiety over its eventual reception, and a muted sadness. Sidi and his bees brought me closer to a parent whose native tongue and culture differs from mine, and for a time, to that sometimes elusive place we call “home.”

When discussing my translation of The Ardent Swarm, it would be more professional, more befitting of me, to emphasis my linguistic acumen, and my experience with translating bilingual authors such as Manai. But, though earnestness has never been cool, if it’s allowed, may I simply say that I put my whole heart into it? 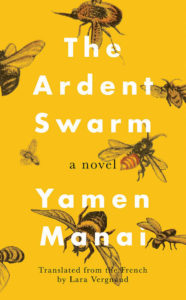 Lara Vergnaud is a translator of prose, creative nonfiction, and scholarly works from the French. Her writing and translations have been featured in The Paris Review Daily, Words Without Borders, and Two Lines, among other places. She is the recipient of two PEN/Heim Translation Fund Grants and a French Voices Grand Prize, and has been nominated for the National Translation Award. She lives in Washington, D.C.

Chigozie Obioma: ‘I Really Do Believe That Fiction Should Say More Than One Thing’ 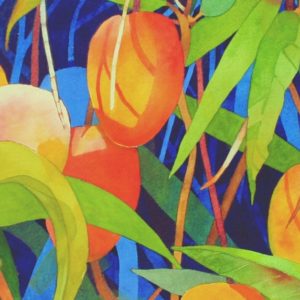 In Calcutta, we cut mangoes into crescent moons, the skin still attached. The mess is the ritual—we drag our teeth against...
© LitHub
Back to top
Loading Comments...