Readers have pointed out to me over the years, sometimes with appreciation and occasionally with peevishness, that I tend to write about an outlandish array of subjects. One of the students working the checkout desk at the science library of the college where I teach, confronted with yet another stack of books on topics radically different than the previous stack I’d piled before her, said to me, “Can I ask you a question? What do you do?”

So old friends and students often send me links or articles under the subject line Why don’t you write about this? Around three years ago Creaghan Trainor, an old student and friend, sent a link about Janusz Korczak, the famous educational reformer and children’s advocate in Poland. Korczak became even more famous when, while running an orphanage in the Warsaw Ghetto, he was advised by the Nazis that his children were going to be deported to Treblinka, but he would be spared, and he chose to accompany his children to the death camp.

I’d read about Korczak many times, since as someone who’s always been drawn to catastrophe as a subject, especially man-made catastrophe, I’d been fascinated by the Holocaust at an early age. I’d even ended up teaching courses on Holocaust literature and film. But I’d never considered writing fiction about Korczak, since I’ve always been wary about writing from the point of view of, or even centrally about, Great Men or Women, especially figures who might be considered saintly, like Jesus or Gandhi or Dorothy Day or Korczak. I usually preferred the worm’s-eye view of history, and besides, when it came to men and women like that, what conflicts in their lives were supposed to measure up to their saintliness? Gandhi’s domestic squabbles? Jesus’s anxiety that he hasn’t done all he could for the poor? I’m most interested in those fictions that dismantle our sense of ourselves, and not usually—unfortunately for my children’s long-term financial wellbeing—hagiographies that seem to be all about the Triumph of the Human Spirit.

Korczak was an amazing guy, though, and since as well as catastrophe I’ve also always been interested in children, and ethical passivity, it occurred to me that the Holocaust brings those three together under maximum pressure, in dramatic terms, so I reread his Ghetto Diary, and about two-thirds of the way through came across an anecdote I’d forgotten about: the problem of a ten year-old the orphanage had taken in who wouldn’t stop screaming. The ten year-old’s mother had been wasting away of ulcerated intestines but had refused to die until he was safely placed in the Home, and he had resisted going in order to keep her alive. Finally he had relented, and she had died the day he’d arrived. He’d been screaming ever since.

It struck me that although those few survivors who’d escaped the orphanage and the Ghetto always spoke reverently about Korczak, of course almost none of them had wanted to be in the orphanage. In fact, some of the children had hated being there, even as they recognized that it had saved them, however temporarily. And they must have felt terribly conflicted about that. Imagine being the boy who for whatever reasons made a saint’s life harder. That sense of knowing how you should behave and being unable to do it—that sense of feeling that you’re not adequately appreciating what you have been given, and in so doing you’re making it harder for the people you love and admire: that was a conflict I could relate to.

I started researching by reading first-person accounts of Polish childhoods in the 1920s and 30s—and there were lots of those—with a special attentiveness to the voices. I’m sure the project felt like such an act of hubris that I’d already decided to use the first person in order to go at the problem of authority head-on, as it were, and I told myself that if I couldn’t begin to master my protagonist’s voice to my own satisfaction, then I couldn’t adequately imagine his inner life, either, in which case I should just drop the whole thing.

I also wanted to, by limiting myself to a single first-person sensibility, evoke the way in which the dread of what’s coming is always there in the reader’s mind but is opaque to those in the historical moment. One of the pleasures that fiction can deliver is, of course, the god-like ability to flit from sensibility to sensibility—to penetrate everyone’s consciousnesses, and to know with certainty what everyone is thinking: a mobility and omniscience that we never in our regular lives get to experience. Another pleasure that fiction can offer, though, is the opportunity to inhabit a single, other sensibility, as limited (or perhaps even more limited) than our own, as fully as possible. Both pleasures are exercises in the empathetic imagination, but for me the latter option nearly always seems, when done well, more bracingly revelatory as a crash course in empathy. And I tend to believe that most of us need as bracingly revelatory a crash course in empathy as we can get.

Henry James, in his preface to What Maisie Knew, reminded us that “Small children have many more perceptions than they have terms to translate them; their vision is at any moment much richer, their apprehension even constantly stronger, than… their at-all producible vocabulary.” In other words, their feelings can be complex even when their language is not. James was suggesting that the writer should grant those created children a language that honors their intuitions and inner life.

That’s both the task and responsibility of the writer who chooses to write about children: to maintain the illusion of staying within their “at-all producible vocabulary” while still with that reduced pool of resources suggesting the most complex emotional states.

That task has the happy side effect of paralleling conceptually a crucial aspect of childhood: it enacts the child’s relative helplessness while restoring to her her dignity. And it allows the writer with the very form of the fiction to remind the reader that a child never has enough to work with, in terms of vocabulary. But even so, it’s amazing what the child is able to express.

I’ve also always been fascinated by the way in which the child or adolescent is likely to feel more responsibility than power, or control, and because of that is likely to find himself drawn into complicity with the more powerful. And the way such complicity can then move us into areas we might never have believed we would go.

So my boy started complaining to me, and I needed more concrete particulars about the commonplaces of his life if I was going to enable him to keep complaining. I did even more research for this fiction than I usually do, and I usually do so much that I horrify my more efficient writer friends with the excess. (Ron Hansen, having glimpsed the size of my research folders for a short story about an executioner during France’s Reign of Terror, said, “Jeez. I could get a trilogy out of the kind of stuff you turn into a short story.” I reminded him that I was always trying to find a way to put less food on my children’s table.)

I’d already read many of the canonical Holocaust histories and primary sources but reread them with more focus and then also had a huge amount to learn about Warsaw, and about the Ghetto, and about the schools and orphanages and child smugglers, once the Ghetto was closed. I also visited Warsaw and the surrounding countryside, and interviewed everyone I could, all of which was hugely helpful and reorienting.

In some ways, too, I’m sure I was moved by my character’s perceptual limitations because they so closely mimicked my own. A commonplace claim about the relationship between the Holocaust and the arts has been that the enormity of the suffering and horror defeats any attempt at adequate representation. But books like Jona Oberski’s Childhood reminded me that by making a child our guide to such infernal regions, a work could enact any number of ways in which the impossible facts of the Holocaust make children of us all. And maybe such a work could also then enact the inherent powerlessness of a child’s position. And the inherent limitations of a child’s ability to articulate suffering. And maybe through that, both the necessity and the inherent impossibility of our hope of adequately testifying about anyone else’s pain.

Jim Shepard’s latest novel, The Book of Aron, is out now from Knopf. 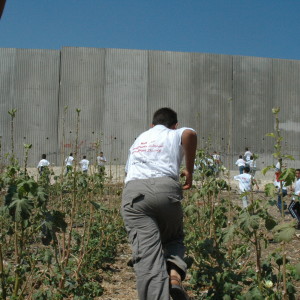 The following was written for last night’s PEN World Voices evening of prayer and meditation.   It’s really...
© LitHub
Back to top