"It wasn’t my job to save anyone."

I was going through my notebooks the other day when I came across a piece of paper; a torn scrap on which I’d written hurriedly a name and the plot number of a grave. Writing a family story is a question of finding where the bodies are buried and this, in very real terms, had been the first clue. The original had fluttered from a file my father had been holding, it had landed in my hand as we’d stood together in his studio, I had copied it down on a scrap of paper and taken it home, it had marked a beginning and an end. Find my grave—a message from an uncle long gone whom I’d never met, yet his demand had arisen, up from the depths of who knows where, and had circled round and round my head. It had made me go that day to see my father and ask what had happened to his brother.

A plot number and a message and a myth that it was impossible; I was told the grave no longer existed but I didn’t believe it. It’s funny how these things are both a matter of faith and disbelief. Had I taken his word, I never would have found out, the process would have been cut short and there wouldn’t be a novel, my debut, telling the story of what happened. And if I hadn’t had faith in the voices in my head telling me to pursue and not let up, I’d have driven home that day and written something else. But I did have faith and I did pursue and A Perfect Explanation is the result.

My father was sold by his mother to his aunt for £500. His mother, Enid Campbell, was granddaughter to the 8th Duke of Argyll. She was born in Inveraray Castle—the epitome of grandeur, and it fell to her to provide an heir. This isn’t a spoiler; it’s the backbone to the body I breathed life into that day, standing with my father, the plot number of a grave in my hand. I had always known this fact, it had not been a secret. Rather, it had been more of a joke, but tragedy gets dressed up in lots of guises, and the stiff upper lip of British humor is a brilliant cover for loss. It had served him well. It had almost got him to the end of his life without questions being asked. Yet when I did begin to ask it was as if he’d been waiting.

It’s a beautiful thing to spend the last years of a parents’ life getting to know them; not as a daughter knows a father but as an adult knows another adult, human to human. This story that he’d lived and held to him all those years was a key to who he was; an upright, quiet and undramatic man who’d lived through the crushing scream of crisis and survived and told no one. These, the real secrets and pain were what unfolded as I came, day after day, week after week to sit and talk with him, and read through the archive that he’d diligently kept and kept locked. Seven volumes of letters between his mother and father written in the year before they were married, the year that was supposed to drive them apart.

A whole trunk of papers; medical, legal that charted what had happened next. Another of letters between his aunt Joan, and his grandmother, Lady George Campbell, wringing their hands over the state of Enid, as if she were a democracy in downfall. But there was nothing democratic about the world in which they lived; the lores they were governed by were a tyranny of habit, class, emotional poverty and sexism. It was a place of no heart. It was learned behavior from an Empire built on turning its face the other way.

Here was a story crying out to be heard; of shame, grief, needs gone unmet and love gone awry.

Sitting here with my novel beside me on the desk, it still amazes me that the story could be condensed into a book. It was so complicated. It covered so much ground. Likewise, the genre that I settled on—a fictionalized account of a true story, sometimes called auto-fiction or the non-fiction novel—is also a wonder to me in that I was naïve enough when I set out to not know what kind of book I was writing. When a writer is given a story it is exactly that, a gift, to do with what we will. I could have made it into anything; a memoir, a biography, I could have used the true story as a jumping-off point, freeing my hand to play fast and loose with the plot. I could have changed all the names and been opaque as to how true or false it was, protecting my family from attention by keeping the veil drawn. I could have shut it in a drawer and refused to write it; I could have left it buried. But I didn’t do any of those things.

Here was a story crying out to be heard; of shame, grief, needs gone unmet and love gone awry. I knew I had to use real names and be loyal to the facts. I knew in this way, there was a catharsis to be had; that if the whole sorry mess could be brought out into the light, the reasons for hiding it in the first place—that we’d be hated—would be proved obsolete. I knew that by writing it, something would be set free. And so it proved.  I set out blindly with these nebulous, insistent feelings for a compass, having no idea how to write anything and ended up learning how to write a novel.

It might have been more obvious to write it as a memoir or biography, but to call my choice of genre a decision would be misleading. I didn’t know enough about the craft to have such a clear technical idea of what I was doing. I’m not sure I even asked myself the question or unpacked the differences between one kind of book and another. It was more like a fight with a piece of clay, a battle between the ignorance in my head and the knowledge in my hands. I knew I wanted to write a book, but it—not me—knew what form it wanted to be; a story that stood up whether the reader knew it was true or not, made stronger by the fact that it was. Something with all the pace and rhythm of fiction but with plot turns of fact, and real names unhidden. An emotional fiction strung between poles of truth because I could never know how they felt, only what they did, and I had only myself to ask what impulses might have got them from one situation to another. I could hear the rhythm of it, and although I didn’t really understand, in the end I gave in. I stopped trying to work it out with my mind. Instead I shut my eyes, and listened.

Don’t for a minute think it was all cups of tea and soft focus lenses. It took me seven of those ten years to work out what it was about. That crucial question without which no story will hang together, was born of hard won technique; a climber might have the urge to scale El Capitan, but without technique they’ll fall, and so did I, again and again as I struggled to understand which element of this complex story lay at its heart. Four other versions were written and ripped up until I realized that turning a true story into a novel is a process of choices, the most vital of which is who—writer or daughter—is doing the telling.

It was with relief that I realized that it wasn’t my job to save anyone or change anyone’s mind, to rewrite history or make someone feel better.

For anyone out there facing the same task, being clear where you’re coming from will form the bedrock of every decision made after that. After failing repeatedly to tell it as a daughter, I changed position and, more out of exhaustion than anything else, approached it as a writer, with a writer’s cold insistence on narrative form. I had to put away my wish to know who was right and who was wrong, I had to shut up so that they could speak. It was with relief that I realized that it wasn’t my job to save anyone or change anyone’s mind, to rewrite history or make someone feel better. It was my job to find the heart, build the narrative and write it to the absolute best of my ability. I had to let the characters speak for themselves, stand as far back as I could from passing judgement upon them, and find the beginning, middle and end of a slice of reality which had carried on regardless of who was in their grave.

More specifically, it had carried on in the hands of others, of fathers and daughters, and finding that scrap the other day as I went through my notebooks, I knew that another stage had been reached that I’ve been meaning to do all along: to go as a daughter to the grave that I found, the grave I’d been told no longer existed, and leave a copy of my novel there. I remember the first time I visited; how I walked the paths of that cemetery, searching. I remember finding what I was looking for. I remember the shock. To tell you why will be a spoiler, so I shan’t. You’ll have to read it to find out. 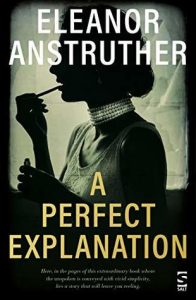 A Perfect Explanation by Eleanor Anstruther is available now via HMH Books.

Eleanor Anstruther was born in London and now lives on a farm in Surrey with her twin boys. A Perfect Explanation is her debut novel. 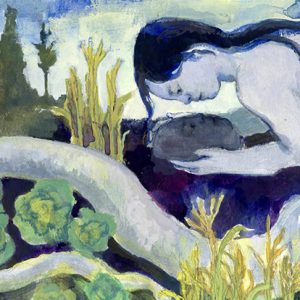