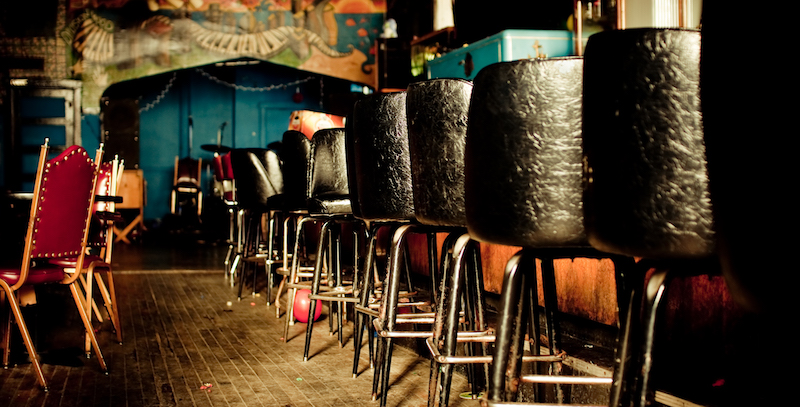 Alison B. Hart's 12 Steps, From Beginning to End

By Alison B. Hart

1. Give the main character a pseudonym. Call her Helen. This is good. You need distance. You don’t feel anything like a Helen. You’ll be able to write about what happened.

2. Change the antagonist’s name. Use Rick. In real life his name was Pete, which is also in the name of the bar in Brooklyn where you ran a reading series, where the two of you met. You talked to him longer than you otherwise would have because you liked the coincidence. You also enjoyed that his name irked the bartender, on whom you’d had a low-level crush for years. “What’s his name?” the bartender had asked when Pete was in the bathroom. “Ugh, of course I hate him now,” he’d said.

Rick strokes the back of her neck, and Helen lets him pull her in for a kiss. His lips are softer than she remembers lips being.

3. Focus on the mundane. Remember the details—his long fingers, the way he left his car keys out as some kind of advertisement, how he positioned his stool in relation to yours so that your legs were always sandwiched between his. Tell yourself it’s okay to remember everything in its bland ordinariness, that it’s important to get everything right.

“Do you have any brothers or sisters?” she asks Rick. It is another in what has come to feel, in the last five minutes, like a litany of questions. She knows she should stop asking them, but she can’t help herself. She met her ex in college. She doesn’t remember how to do this anymore. How do people even get to know each other? “You’re a stranger!” is what she keeps thinking. “Isn’t it strange to be strangers?” she wants to ask. If the way she feels inside were a sweater, she would force her feelings out and dare him to rub them.

4. Write about longing, that mercurial force that seems to flit around the room like a moth you can’t catch. Remember how eager you were to feel something. Remember that as you left the bar with Pete, you were thinking of your friend, the bartender who hated Pete’s name. You liked that your friend was irked. Remember you thought it meant something that he felt something about you, that it might be the first inkling of jealousy, when up until then you’d only been pals who rooted for each other, with no space between you for lust. Remember that at the second bar, you sized Pete up. He was your type, generally—tall and sporty—but not that interesting. He told the same story twice, for example. Remember that you tried to save him by telling your best story badly, the one about the time you met Martina Navratilova.

The point of her story is that there is no point and its pointlessness is supposed to be charming.

Rick sort of smiles, but Helen doesn’t know how to take it. He doesn’t look charmed, and she feels deflated.

“You ran track,” he says. “So you must be really athletic.”

“You had to take a sport,” she shrugs.

She takes a big slug of her beer, which has been sitting half-full. “I’ll be right back,” she says. She touches Rick’s thigh, and he moves to let her pass.

Helen needs air. She isn’t in the mood for company anymore. She thinks about leaving, but she promised to let Rick walk her home.

Remember that you pitied him, but not enough to take him home. Remember how you tried to leave twice, that you lied about an early-morning meeting. You let him walk you home nonetheless. When he asked to come up, you said no. He said, “Let’s just talk,” and you relented. Remember how nice it was having someone to walk with after being single for so long.

Later, you’ll forget that you said no. You’ll think it was only bad judgment that allowed him up the stairs, into your apartment, onto your couch. Bad judgment and loneliness. Later, you’ll re-read these pages and it will come as a complete surprise, will feel like the worst cliché that you said no in so many ways and he didn’t listen.

5. Preserve the essentials of the plot. Tell the truth. You kissed him, but when his hands wandered over your body, he was too rough. It didn’t feel good. You tried to coach him, but he did not want to learn. He handled you like you were a piece of wood. It hurt. You told him you were sorry, this was going too fast. You apologized to him, because you felt guilty about letting it get this far, a man in your apartment with his expectations. He smiled and said it was okay, offered to give you a head massage instead. You thought he was giving both of you an off-ramp, a segue into a different kind of comfort, so you said yes. You let him put your head on his knee. It was nice at first. The sound of his fingers combing through your hair was like the best white noise. You thought about fractals, those hair-like tendrils of infinite complexity, the repeating, comforting patterns that recur throughout the universe, like roots, veins, lightning. But then his hands began to wander again, over your shoulder, over your arms, over your breasts. You couldn’t think about fractals anymore. You had to think about this guy and his expectations, how to get this stranger to leave.

Helen moves to sit up, but she can’t. Her head rebounds in his lap. She tries again and feels a tangle of hair go taut in his fist. She is careful on the third try. She kicks the pillows out of the way, digs her shoes into the upholstery, puts her hands under her butt, clenches her abdominal muscles and lifts.

When he tries to keep her down again, her stomach turns like milk gone sour, like something she wants to get away from. She twists her body quickly, yanking her hair free, and pushes up. They are nose to nose. Rick holds her there in his lap, his hands cuffing each arm like she’s a young child in need of scolding.

6. Give the story to a friend. He works for a journal you admire. He will tell you that the story is patient and harrowing, which you take as a kindness since the journal isn’t taking it. You have failed somehow. Writing is how you pin things down. It has always been the way you see things more clearly, but you are unable to see how to make this story matter.

His eyes are bright and shiny but his mouth hangs slack. She feels him take her measure while she takes his. She hasn’t decided yet whether to be afraid, whether being afraid will help. She is glad he thinks her athletic.

7. Re-read the story. Linger over the characters. Decide there are too many. There’s Rick; there’s the bartender; there’s an ex-boyfriend who serves no purpose but to prove that Helen is fuckable. This isn’t an autobiography, after all; this is a short story—combine the ex and the bartender into one man. Allude to a drunken hookup between him and Helen. She is still pining for him, and this is why she doesn’t see Rick coming. Change Rick’s name to Greg. Change it back again. Send the story to five more journals.

8. Tell yourself it’s too soon to write about this. Tell yourself you’re fine, it wasn’t a big deal. Then one night at the bar, something an author reads—some casual allusion to a woman in danger, a detail so routine it’s just scenery—unravels you. You weep in the garden outside, unable to catch your breath. At home that night, you listen as your two best friends hold your hands and remind you that you are safe.

“You need to leave,” she says and sits up. Rick lets go.

She stands and faces him, tugging down her camisole. “Time for you to leave,” she says again. “Now.”

He doesn’t move. She feels like a sequoia, towering above him. Rick looks small and compact, like a lumberjack on a break. She grabs him by the wrists and pulls.

“Get up,” she says, and pulls again. She’s on adrenaline now. He rises up beside her, lengthening by units—legs, abdomen, torso, head.

“But I need to go to the bathroom,” he says. Helen drops his wrists.

“You’d think you’d never been asked to leave before,” she says.

9. Write other stories. Go to therapy. Try to come to terms with this story, the one you can’t write or forget, by living your life. Quit your job. Start a new one. Get married. Have a baby. Spend a week in Alaska with your family. Fall in love with the snow-topped mountains, which you can see from the kitchen table where you work while your daughter naps. Watch a moose pass right outside your window, as if it were nothing more than a giant stray dog. Question your own size in relation to it.

10. Decide you’re not going to be ashamed anymore. Grow old into a different life built on more solid ground. Realize you still carry three shames—one for the failed story, one for the loneliness you felt, one for the assault itself. Type the words “EMBRACE LONELINESS” at the top of the next draft to remind yourself not to be ashamed. But you are still ashamed. Submit the story again. Wait for it to be rejected.

She pretends to study the books on her shelves while he disappears into the bathroom.

Rick emerges and collects his wallet and keys. “Okay, see ya,” he says.

Helen opens the front door wide, and Rick walks out into the building hallway. She notices her left leg shaking and realizes it’s been shaking for minutes.

11. Give the story to a couple of friends. You no longer know what it’s about and why it’s not working. Their answers don’t help. They can’t tell you why it’s okay to write about a not-rape. You don’t even know if you believe in it yourself.

12. Watch out for the Petes. Writer Pete. Magazine editor Pete. Movie mogul Pete. Congressman Pete. Oscar winner Pete. President Pete. Watch them get promoted. Watch them go on as if nothing has happened. Watch everyone go on as if nothing has happened. Then, one day, watch a succession of Petes fall, brought down by the claims of the women they’ve hurt. Be surprised that anyone cares. Be surprised that you are able to care after so long of denying yourself that basic right. Read every #metoo story that comes into your feed and think of the one you have been unable to tell. Worry that trying to tell it will undo you again, and again. Tell it anyway.

Alison B. Hart's writing has appeared in Joyland Magazine, Literary Hub, The Missouri Review, The Millions, The Offing, and The Florida Review. She is the co-founder of the long-running reading series at Pete's Candy Store and received her MFA from The New School. She grew up in Los Angeles and now lives in North Carolina with her family. The Work Wife is her first novel. Visit her website, alisonbhart.com, or find her on Twitter, @alisonbhart, and on Instagram, @alisonhart800. 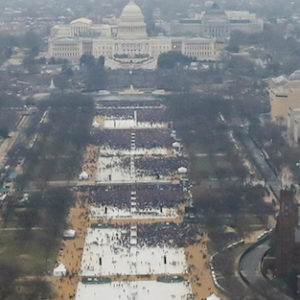 “We’ll need to get out at Adams Morgan and walk. We’ll never make it onto the Mall, in any case.” Two of us are on our way to the inauguration...
© LitHub
Back to top