One Year On, Aminatta Forna Remembers the Empty Streets of Washington

“We’ll need to get out at Adams Morgan and walk. We’ll never make it onto the Mall, in any case.”

Two of us are on our way to the inauguration of the 45th. Up until a day or two ago my plan had been to attend the event alone. I didn’t know too many people who might want to come and my husband knew well enough the calculation I had made when I told him I was going and suggested he stay home with our son. It was likely the event would attract white nationalists and we both knew the sight of a racially mixed couple inflames folk such as those like little else. Alone, I made a far less enjoyable target.

This sounds counter-intuitive to some people. It sounded counter-intuitive to a colleague at the university who offered to come along. “You need someone with you.” I said thanks but no, finally I explained carefully that I didn’t want a white man with me. “But I’m not ‘white,’” said Duncan, which was technically true, Duncan’s mother is white British and his father is Chinese, but you couldn’t tell this by looking at him. On matters of my own safety I really prefer to trust my own judgment. Still, you know how it gets.

“We’ll need to decide a place to meet if we get separated,” says Duncan as we ride the subway escalator at Adams Morgan station. I’ll admit that letting Duncan accompany me is turning out to be not such a bad idea, because Duncan had been at the inauguration of the 44th, and knew a thing or two. All the same and for aforementioned reasons, I’m not overly concerned about becoming separated from him. I say: “How about we meet back home?” But Duncan insists he must not leave me alone, so I suggest we regroup at the metro station. Duncan describes for me the last inauguration: cold that numbed cheeks, hands and lips, crowds so dense movement was at times impossible and at others impossible to resist, jammed cell phone networks—the reasons we need to agree on our rendez-vous now. We step off the elevator and out into the street. The street is empty. A lone jogger passes us by. Duncan frowns and looks around. I’m still not used to the geography of the city, or sure of exactly where we are. I think we must have gotten off at the wrong stop and suggest we get back on the Metro. But we haven’t and we don’t. Instead: “We’ll walk,” says Duncan.

And so we walk. We walk past merchandise vendors, we walk past Secret Service men and women, past police horses in their boxes, we walk past barricades. Everything you’d expect at an inauguration is there, everything except for people. Duncan and I take photographs of each other, one against the backdrop of the Lincoln Memorial. I take a picture of a row of unused lavatories, of black street vendors selling red baseball caps. Duncan is British and by pretending to be a visitor he takes to gently baiting Secret Service officers. “Is something going on today? Is something supposed to be happening?”

At Constitution Avenue, by the memorial to the Vietnam Veterans, we find people gathered in a cordoned off area of the park. There is an enclosure and inside the enclosure something approaching a crowd. A small group of protesters wave signs outside. A white couple pass by (pretty much everyone apart from the vendors is white). The woman has on a camel coat and her hair is the kind of luminous ash blonde I equate with the very wealthy, she turns to one of the protesters—middle aged, pudgy, he looked like he might teach high school—and with a toss of her head says. “We won!”

I’ve come looking for supporters and here are some. We join the queue for security, but soon realize that all gaining entry buys us is a view of a giant screen and limited escape routes, and so we slip out of line and head for Independence Avenue. There we find three men holding up signs which read: “I’m a Muslim” and “Meet a Muslim.” But nobody is taking up their offer, mainly because there is hardly a soul there. There is one couple who look like foreign tourists, real ones this time, who had maybe thought it would be nice to be in DC to see a presidential inauguration (this idea having arisen many months ago when they booked their stay) but haven’t quite banked on this, a city that feels like the start of one of those films—you know the kind—when the hero wakes from his hospital bed and wanders through deserted streets still in his hospital gown. 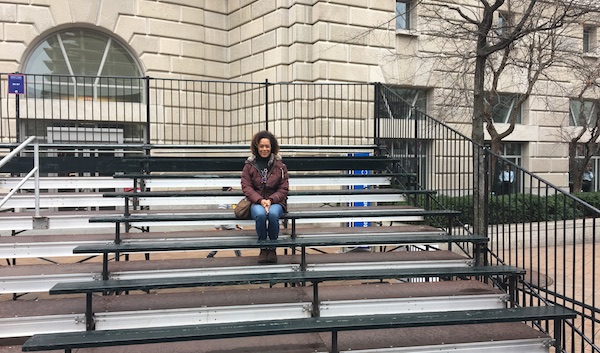 From Independence we walk to 12th Street, where we find a security check. No lines this time, and so we pass through. A banana among Duncan’s possessions is confiscated. Maybe they think he plans to throw it, I don’t know. It starts to rain. Now we can see on the screens at each intersection on Pennsylvania Avenue that the swearing-in ceremony is underway. Small clusters of people in a few of the bleachers, which are otherwise empty. We are only a short walk from Trump Hotel and we agree surely there will be crowds there, but we are stopped from reaching the hotel by the barriers that have been erected to partition off sections of Pennsylvania Avenue, a crowd control tactic which in the current situation has become utterly redundant. Still, we can see all we need, namely that the pavement outside the hotel is empty. We watch the president elect take the oath, debate whether to wait for the motorcade and decide not to. I imagine the 45th driving down the near empty streets, on a day like Miss Havisham’s wedding day.

The 45th will take it with none of Miss Havisham’s forbearance. His spokesman will say the turnout was the largest of any inauguration. Others among his followers will accuse the park service of doctoring the photographs of the Mall which show how much greater had been the turnout for the 44th. The 45th will insist that the sun shone.

On a deserted Memorial Bridge Duncan takes a selfie and I take a photograph of Duncan taking a selfie. Outside the gates of Arlington cemetery, where I have arranged for my husband to meet us and drive us home, we see our first and only white nationalist. He wears a sharp haircut, white shirt, black jacket and long britches tucked into jackboots. He is walking in the opposite direction from us and I know not where he has been or where he is going.

At home I upload my images onto Facebook, first of all, one that Duncan took of me sitting alone in the empty bleachers, and underneath it I type: “What if you gave an inauguration and nobody came?” 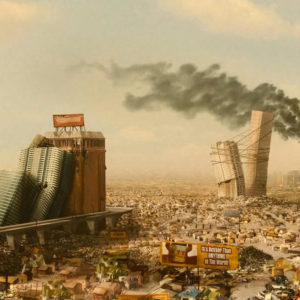 By the time you read this, what I am about to remind you of will be old news, but bear with me. The media moves at such velocity...
© LitHub
Back to top
Loading Comments...