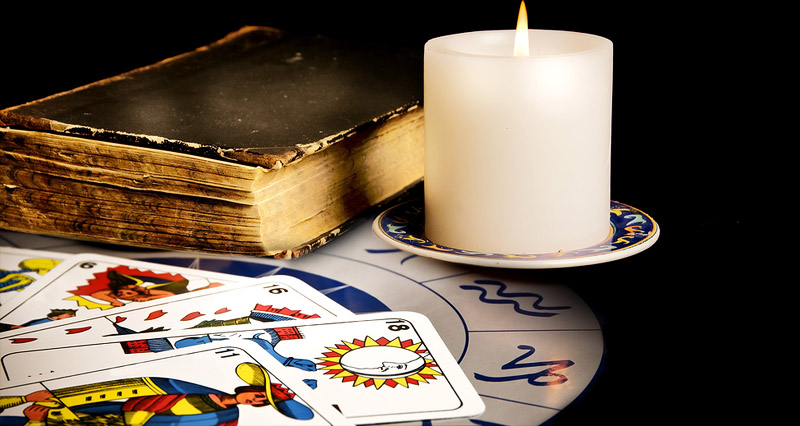 How to Tell the Future With Books

From Bibliomancy to Chance Encounters, Books That Have Changed Lives

Seven years ago, my friend Stavros moved to Barcelona because of a book he found on the street. Of course, the story isn’t really that simple. His student visa had ended along with our graduate program, but he wasn’t sure if he was ready to return to the rough cliffs and blue seas of Cyprus. During our MFA, he’d become involved with the Poetry Brothel in New York—since they have a Barcelona branch and he also speaks Spanish, moving there would give him a built-in group of other writers to befriend, as well as a part-time job doing reading at Brothel parties.

Those were the logical reasons. But the truth is also that, wandering around late one night in Brooklyn, he noticed a travel guide to Spain left sitting on a stranger’s stoop almost as if it was waiting for him, and that book helped shift the course of his life.

“Finding the travel guide felt like a sign,” he told me as we ate goodbye ice cream together not long before he left. “I’d been thinking about Barcelona anyway, but after that, I knew I needed to move there.”

Although I was happy for him, I also felt bemused: how often does the world work that way? What luck for a poet to discover—when trying to decide between places he might live—a guidebook to one of his possible choices. Stavros’s future was a mystery and then, at random, he found a book that contained descriptions of streets he could soon walk, restaurants where he could order sangria and spiced olives, parks he might stretch out in and rest under the shade of Barcelona’s towering plane trees.

I’ve never had an experience like his, where an encounter with the right book changed the trajectory of my life. When I wander, I don’t happen upon texts whose pages reveal my universe-sanctioned future; instead, I find cigarette butts, broken glass, greasy fast food wrappers, lost pacifiers, spat out gum—the ordinary detritus of the streets.

But Stavros isn’t alone. Last week my friend Alicia launched into a story about how her yoga teacher had, during her youth in Scotland, discovered a book of yoga poses someone had abandoned in her parents’ garden. It’s a beautiful thing to imagine: the book half-hidden under rose bushes, damp with dew, is rescued and the lucky child who finds it begins practicing the postures secretly in her room. Then her future unfolds, graceful as someone moving seamlessly through all the warrior asanas, blossoming into her life.

“That book was,” Alicia said, telling me the story, “her destiny.”

When I wander, I don’t happen upon texts whose pages reveal my universe-sanctioned future; instead, I find cigarette butts, broken glass, greasy fast food wrappers, lost pacifiers, spat out gum—the ordinary detritus of the streets.

Other people I know also attribute shifts in their lives to books, even if their stories are less dramatic. My friend Emma ascribes her move to the east coast from sunny California to her high school love of Michael Chabon’s Wonder Boys. The novel’s depiction of the writerly campus life made her decide to study at Wesleyan, somewhere she too could wander in a winter coat on cold nights. Another friend was given a copy of Bulgakov’s Master and Margarita by a former girlfriend, a gift that soon led him to Nabokov and Dostoyevsky; now Will’s a cryptologic language analyst for the Air Force, specializing in Russian. And when my friend Brad’s older sister left for graduate school, he began spending time in her empty room as a way to still feel close—there he found her copy of T.S. Eliot’s “The Wasteland.” Drawn already to poetry, as he thumbed through the pages, he found a deeper resonance in the snippets of French within the poem which “seemed to be that barely accessible language; French itself was poetry.” This copy of Eliot, discovered because he missed his sister, eventually led to his publishing a book of translations of the French poet Chantal Bizzini last year.

For those of us not lucky enough to chance upon a life-changing text, there is another alternative: a more active way to find clues to our future within books. Bibliomancy, the use of texts for divination, has been practiced in various cultures across the world for thousands of years. With bibliomancy, rather than waiting for the right book to find you and offer guidance, you can turn to a book already at hand.

Some forms of bibliomancy are based on specific texts, such as the I Ching (or The Book of Changes), which is probably the oldest of divination books. The I Ching’s origins are shrouded in mystery, but the 64 hexagrams it contains were most likely first inscribed on oracle bones in the Shang dynasty circa 1600 BCE, and the words that accompany them were transcribed from the oral tradition into written text perhaps 800 years later. There are many ways to consult the I Ching, but traditionally you must first toss 50 yarrow sticks or three coins on the ground; the shape made as they land determines which section of the Book of Changes you must turn to for the knowledge you seek.

The ancient Romans saw prophecies everywhere, reading auguries in the paths birds arched across the sky and the patterns sacrificial entrails inscribed on the ground. In addition to these other forms of divination, however, they also practiced sortes, a type of bibliomancy similar to drawing lots, where verses from Virgil, Homer, and the Bible were used to foretell people’s fates. A famous example of this appears in Sir Philip Sidney’s Defense of Poesy when Sidney recounts how, as a child, Decimus Clodius Albinus found the line “madly I take up arms, without having reason to do so” in the Aeneid and then “in his age performed it,” vainly attempting to usurp Caesar’s throne. The poet Robert Browning also practiced a version of sortes, detailing in a letter to his future wife how “fancy seized me to try the ‘sortes’ and dip into the first page of the first [book] I chanced upon.” The book he used, Cerutti’s Italian Grammar, held little romantic promise yet “what did I find?… If we love in the other world as we do in this, I shall love thee to eternity.” This bookshelf revelation proved prophetic: he and Elizabeth Barrett soon eloped and, over a century and a half later, their relationship is still considered one of the literary world’s great love stories.

In Iran, many people practice fālgīrī, a type of fortune-telling that revolves specifically around the poetry of Hafiz. Those who want advice about a specific predicament or a general forecast for the coming year close their eyes and open his book: tradition holds that the first poem their hand touches holds whatever answers they need. For anyone without access to a hard copy of Hafiz, modern technology now provides a Fale-e Hafiz website where you simply click a link and a ghazal appears.

Those inclined towards more polyamorous literary divination may want to consult the Bibliomancy Oracle, a website whose random generator selects text from a database of contemporary literature curated by the poet Reb Livingston. A few days ago, unhappy with a romantic situation, I decided to try the oracle myself, asking it the broad question: Will things work out okay? The oracle responded with an excerpt from “faster, faster’ by Stephanie Balzer: Truth is, faith’s a wager you can’t lose. It’s the allure of absolute certainty, like rhyme, a sense of closure and conviction. To me, the oracle’s answer was reassuring, a promise that if I had faith, love would persevere—if not with this man, then eventually with another. To a friend who I mentioned it to, however, the fragment was more ambiguous. She thought Balzer’s words suggested that faith doesn’t guarantee an outcome so much as it provides a sense of conviction about what you already believe. Rereading the fragment, I see how Diana’s interpretation is sharper than mine. Since I was reading the text as a prophecy about my love life, personal bias made me sloppy, allowing me to see the future I want hidden inside the words.

This made me realize maybe all these stories about books as catalysts had really been about confirmation bias: the way we see what we want to. Since Stavros was already inclined towards Barcelona, the travel guide he found looked like a sign. If he’d wanted to move back to Cyprus, he might never have noticed Lonely Planet: Spain as he walked past that stranger’s stoop. And if Alicia’s yoga teacher had grown up to be a lawyer, the book of asanas she rescued from her parents’ garden would be just one more thing packed away with threadbare stuffed animals and other mementos of childhood; instead it’s a story she tells to students about how the universe guides us. Perhaps it’s less that these books helped augur their futures than that something inside each of them was kindling and the books were struck matches that sparked. If they’d steered their lives in other directions, the memory of finding these books would have already been discarded like jetsam instead of kept safe as treasured nautical maps.

Since I was reading the text as a prophecy about my love life, personal bias made me sloppy, allowing me to see the future I want hidden inside the words.

This phenomenon is what the philosopher Walter Fisher calls narrative rationality, a paradigm that asserts that people understand and explain their behavior, both to other people and themselves, by creating stories that justify their choices. It’s not about finding a book that changes our lives; rather, we change our own lives and ascribe the role of catalyst to that book, making it a character in the story we’re writing.

While I’ve always hated the phrase you are the author of your life, if I look at it as a statement less about trying to control the future than about the way we view the strange mosaic of fragmented moments that make up our past, it makes sense. So many things happen and only after our lives unfold can we assemble a coherent narrative and understand what transformed us: which piece of advice stuck, which party was the one where we met our beloved, which doctor’s visit diagnosed the tumor, which small decision we made was the one that changed everything. We really only know what matters when we look back.

Kate Angus is the author of So Late to the Party (Negative Capability Books, 2016) and the founding editor of Augury Books. Her poetry and nonfiction have appeared or are forthcoming in The Atlantic online, The Washington Post, and the Academy of American Poets’ “Poem-A-Day” feature.
http://www.kateangus.org/ 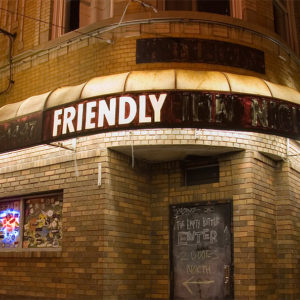 The following is the foreword from The Empty Bottle Chicago: 21+ Years of Music/Friendly/Dancing. It was either...
© LitHub
Back to top