How to Stop the Spread of Anti-Vaxxer Misinformation

"As a scientist, I believe ignorance is best countered by the facts"

When I set out to write a book about vaccines and immunity, my intent was that the over-arching theme of the manuscript reflect the countervailing forces of hope and fear that have surrounded the subject of vaccines throughout their history. From the standpoint of public health, hope should—and ultimately will—dominate the more negative emotion because modern science has conveyed practical and affordable means to prevent (and in rare cases utterly eliminate) scourges that have long plagued society, chief among them, the eradication of smallpox. Other successes include the management of a myriad diseases that have historically killed or maimed innumerable of our youngest and most vulnerable population as well as the potential to eliminate polio within the coming years. Similarly, vaccines hold the potential to finally manage pandemic scourges such as the plague and influenza, the latter of which tends to cut down double and even triple digit millions of people worldwide on a recurring basis every few decades. In the United States alone, approximately 30,000 people die each year from influenza.

As we have seen, each vaccine success has consistently been met with skepticism and outright hostility. Such fears began with the ostracism of Benjamin Jesty and Cotton Mather and continues today in the form of the acolytes deferring to blatant charlatans like Andrew Wakefield. Jesty’s contemporaries can be forgiven their trespasses because they fundamentally lacked an understanding of the disease, not to mention the concept of vaccination. Indeed, most if not all of Jesty’s contemporaries, even the most highly trained scientists of his day, would likely have raised an eyebrow—if not actively tried to dissuade him—from the bold actions that led him to protect his family from smallpox using his wife’s dirty knitting needles.

However, modern-day vaccine deniers no longer have the convenience of claiming ignorance. The facts exist and although the statement risks being over-used in our common era, it is worth repeating a quote from the late Senator Daniel Patrick Moynihan, “Everyone is entitled to his own opinion, but not his own facts.” The fact is that vaccines save the lives of countless millions worldwide each year. Denial of this fact exceeds the boundaries of common sense and would entail malpractice were a decision to deny vaccination to be made by a physician. However, it is not. Such decisions are made by parents—well intentioned perhaps, but exceedingly selfish.

In justifying this venal act, many parents cite the mantra of “herd immunity.” This statement reflects the idea that if more than a certain fraction of a population is immunized, then the selfish few who are not will be protected from exposure to the pathogen. The facts are that the fraction of the population needed to invoke herd immunity varies from pathogen tends to be very high, often requiring effective protection of more than 99.9 percent of the population. This goal is quite daunting given the challenges faced by parents who lack healthcare or resources to get their child immunized, or the children who are not able to be immunized because they suffer from a preexisting malady like cystic fibrosis or are undergoing chemotherapy for childhood cancer. If one adds to this population the active deniers of vaccines, this only increases the inevitably that the threshold required for herd immunity will not be achieved. Consequently, we are seeing increased incidence of preventable disease and death, spiking with tragedies such as an ongoing tragedy that is cutting through unvaccinated children in Minnesota.

Compounding the problem, an anti-vaccine movement has already done lasting damage in terms of diluting the efficacy of the pertussis, or whooping cough, vaccine. An over-reaction to the side-effects of the vaccine, first in the United Kingdom and then in Britain, compelled an efficacious product to be replaced by one we know to be inefficient, often requiring boosts every two years. This weakened form of the pertussis vaccine has therefore rendered millennials and future generations susceptible to the return of a dangerous old enemy. These same children (and a growing number of adults) are beginning to feel the consequences. At the same time, the rates of measles, mumps, and rubella are spiking on college campuses as the children of the anti-vaccinators reach college age.

What is to be done?

My own fear for the future of vaccines is swamped by the hope that ignorance, rather than malign intentions, are behind the anti-vaccine movement. Ignorance can be overcome but requires diligence. In a population captured by the cult of celebrity, it is far too easy for high-profile vaccine deniers such as Jenny McCarthy and Charlie Sheen to convey their messages. Indeed, the highest-profile celebrity of them all tweeted on March 27 2014, “If I were President I would push for proper vaccinations but would not allow one time massive shots that a small child cannot take – AUTISM.” This individual is clearly ignorant of the autism link but currently resides at 1600 Pennsylvania Avenue, where he oversees the National Institutes for Health and Centers for Disease Control and Prevention, amongst other responsibilities.

“My own fear for the future of vaccines is swamped by the hope that ignorance, rather than malign intentions, are behind the anti-vaccine movement.”

As a scientist, I believe ignorance is best countered by the facts. The facts need to be delivered consistently and accurately and by trusted individuals. With this in mind, public health officials should consider every venue for sources of information (or even gossip) within a community, from physicians, clergy, and teachers to hairdressers. These populations could be trained in the facts behind immunization, the real benefits and potential risks (and yes, there is some risk, albeit exceedingly rare). In the same way that the much-needed #MeToo movement was set off by a celebrity scandal but sustained by a groundswell of real-world examples, a sustained movement to convey the dangers of a resurgence in measles, mumps, rubella and others is needed. From #MeToo we learned that sexually motivated abuse is everywhere in our society, affecting women and girls rich and poor, and of all ethnicities. Pathogens are just as indiscriminate, and it is only by understanding how vital vaccines are to the health of our communities can we stop the resurgence of the deadly diseases that plagued past generations.

It is critical to remember key decisions about immunization are generally made by young adults, who tend not to have as much worldly experience and are arguably more susceptible to the cult of celebrity. Therefore, a counter-denial program should target venues such as MTV, social events and most importantly for today’s youth: social media. The sources of social media should be included in a campaign to educate teens and twenty-somethings about the importance of vaccination BEFORE they become pregnant. In the same way that special vitamins are prescribed for pre-natal care, information needs to be conveyed to this same demographic.

Overcoming this ignorance should be a comparatively easy task as the primary population from which the anti-vaccinators are drawn is moderately educated and comparatively wealthy. While writing my book, I have been asked in social occasions about what I am working on and have watched a small fraction of people recoil in horror at the prospect of promoting vaccines. However, it is comforting that rather than become defensive or offensive, a continuation of the conversation generally reveals a typical anti-vaccinator is unaware, for example, that Andrew Wakefield’s data was fraudulent and that the rest of the anti-vaccine movement is built almost entirely on a house of cards. In these conversations, I happily convey the search terms they can use to check this out for themselves.

Only by actively engaging, rather than excluding, anti-vaccinators can we hope to convey the actual facts and overcome the ignorance. It was heartening that the inclusion of a high-profile anti-vaccinator in a televised 2018 New Year celebration triggered a wave of social media responses that related how this same person had not hesitated from having a deadly bacterial neurotoxin injected into her face. I am confident this is a reflection of a growing counter-movement that will not only ensure the saving of many more lives, but will dispel the ignorance inspired fundamentally by the same fears that led Benjamin Jesty’s neighbors to be convinced his family would soon sprout horns and run wild through the streets. 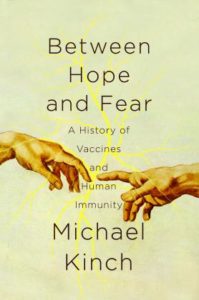 Adapted from Between Hope and Fear: A History of Vaccines and Human Immunity. Used with permission of Pegasus Books. Copyright 2018 by Michael Kinch.

Michael Kinch was a professor at Purdue University, where he researched breast and prostate cancer. He then went on to found an oncology program at the biotechnology company MedImmune. He has led research and development activities at Functional Genetics, Inc. and lead drug discovery at Yale University. He is now a professor and Vice Chancellor at Washington University in St. Louis and is the author of A Prescription for Change, The End of the Beginning and Between Hope and Fear, out now. 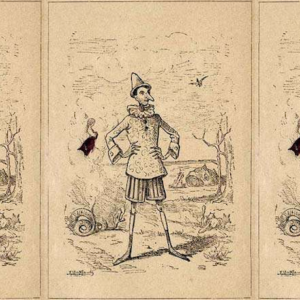 “Newfound interest in Native writers—who speak with the authority of a people who lived through genocide and survived...
© LitHub
Back to top
Loading Comments...