The sky was a pre-storm mauve, the water an oxidized green, and we sat on a public walkway about six feet away from a floating nest. We were at Humber Bay Park, where a pair of red-necked grebes with black breeding caps had nested and recently hatched three chicks. The female grebe sat regally on her untidy throne while her zebra-striped babies nestled on her back. The male trolled the pond for minnows, plunging and surfacing, three tiny beaks chewing the air whenever he returned with food for his family. Both parents took turns on the nest, incubating the remaining egg, going for short swims with the hatchlings.

The nest was a solid but messy mound built of twigs, reeds, and water plants, but also a plastic shopping bag and an old ice cream container. Like most modern homes, it was a work-in-progress. Every now and then the female grebe delivered a few new weedy bits to her mate, which he arranged according to some sloppy vision of home betterment.

The photographers lining the walkway with us eyed the clouds anxiously. A feeling of restlessness spread through the group. The musician was moving about, angling his camera this way and that, with the buoyant intensity of somebody who had just consumed a lot of sugar.

Then with the rumble of thunder in the distance, it was time to run. We ran out of the park, stopping for a moment to see a Baltimore oriole’s nest and a goldfinch perched on a branch a few feet away. Tantalizingly photogenic, it glowed a supernatural yellow against the stormy charcoal-blue sky. I could see the musician hesitate, hand on his camera bag.

With a final dash we made it to shelter as the sky burst open.

Another grebe had hatched by the time I returned the next day, sons in tow. We watched the babies goof around like slapstick artists, falling over, scrambling onto their mother’s back.

That night my sons embarked on some grebe research. The younger recited a few basic facts—aquatic bird, expert diver, elaborate courtship display, loud mating call—and then he paused. “Oh. This is epic,” he said. “It says here that the fossil record shows that grebes were around when dinosaurs roamed the earth!” 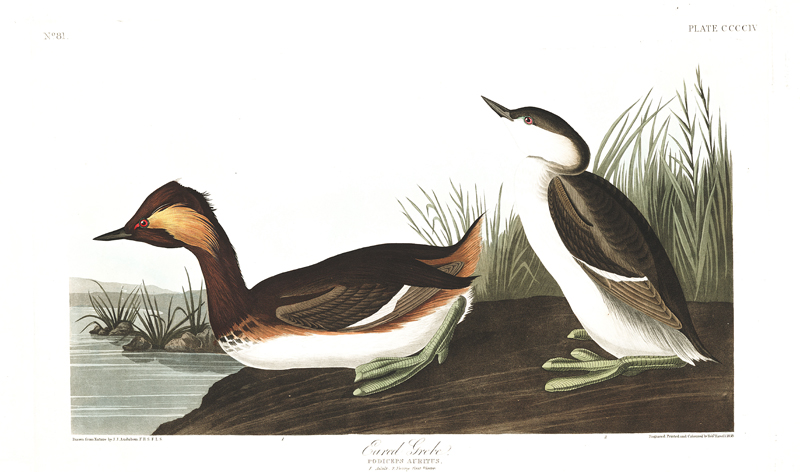 In the quiet that followed, I believe each of us imagined some version of a grebe and a triceratops meet and greet. My own mental picture was lush with megafauna and boggy with ancient marshlands. In that instant, all modern infrastructure evaporated and I had a glimpse of what J. B. MacKinnon in his enchanting book The Once and Future World calls the “understory”—an inkling of the “place that lived before the living city.”

My sons’ imagined scenes were probably more ferocious, less placid, but I think we all agreed that our klutzy hatchling friends suddenly seemed more impressive. The grebes connected us to an ecological history that was seventy million years old. They had journeyed through time and thrived, gorgeous orphans from long-expired worlds. I thought, What could be more invincible than a grebe?

But sometimes thoughts change with the rain. In this case it wasn’t any old rain. It was record-breaking rain, the rain of a warming planet. On July 8, 2012, in Toronto, 126 millimeters of rain fell in less than two hours. (To compare: the average rainfall for the entire month of July in Toronto is only 74 millimeters. The previous record for rainfall was set at 121.4 millimeters in 1954.) The rain came down with the force of crashing waves. It caused flash floods that set cars afloat, stranded rail commuters, and knocked out power to thousands.

“It is really probably the most intense, wettest moment in Toronto’s history,” a senior climatologist with Environment Canada told the Canadian Press. “No infrastructure could handle this . . . You just have to accept the fact that you’re going to be flooded.”

I watched and listened to the storm from my bedroom: the lashing of tree branches against the window, the whoosh and howl of wind, the abrupt wail of sirens rushing to a west-end fire.

I worried for the grebes. No longer convinced of their invincibility and prehistoric sturdiness, I wrote to the musician to see how he thought they were doing. He replied: “I think they just nestle in and take it. They’re quite hardy in that way. They may have gone over and hid in the reeds too, who knows?”

The next day the roads and sidewalks had a different, slicker texture. The local dog park, located near a ravine, was a lake. A giant sinkhole had appeared on my friend’s street.

I wanted to go check on the grebes, but the days were suddenly overfull. My husband and I seethed with stress and ire. Finally, after a stupid fight, we packed ourselves into the car and headed for the grebes.

The early-evening sky was still a bold blue. The musician was there on the walkway with a ragtag group of about ten others. The shallow water of the inner bay was about six feet higher than normal, but the nest—sodden and a-tilt—was still strong enough to hold a family. I felt relief, then besotted with happiness, as I watched the chicks swim around on their own.

It was a relief to be back with the bird-loving weirdos, soaking up their stand-and-stare vibe, basking in the still night air that carried not even a breath of wind. In this decelerated outpost, 20 minutes from our house, everything my husband and I had been arguing about was forgotten. Nothing to prove, nothing to lose, nothing to do. Here, away from the scaffolding and schedules and the extreme depletion of stress, was the understory of life.

As night fell, as we stood together at the edge of a city named after the Mohawk word tkaronto, meaning “where there are trees standing in the water,” I tried to picture the area covered in aspen and poplar forests. Then I went back further and pictured the shoreline as it would have existed 12,500 years ago, well to the north of where we now stood. I pictured us submerged in glacial lake water.

Two weeks later, high summer: my sons and I visited the grebes again. To our surprise, they were now ungainly teenagers with dirty puffball bodies. Their infancy had sped away. They still had strange zebra markings on their heads, but they were now, unbelievably, almost full size. As a mother of a 12-year-old, I recognized this mishmash of little-bird-big-bird. The nest, bedraggled and seeming to be sinking at a tilt, was familiar too.

Enamored of the gawky grebes, I did not notice things had become slower on the bird front. It was the musician who informed me. “We have entered the great lull of summer,” he said. With the end of spring migration came the onset of a quieter season as visiting species moved north for breeding. We had reached the center of our time together, an intermission.

I came home from my last trip to see the grebes and thought, What most of us do with a lull is try to fill it, with stuff, with recognizable busyness.

As I thought this, I spent hours online. I read articles about efforts to “weatherproof” cities from climate disaster, and I downloaded African mbira music because a friend had told me it was good music to write to, and I watched Searching for Sugar Man on the musician’s recommendation.

I told myself I was researching and good research was promiscuous. Subjects came and went. I read about John James Audubon and browsed Grace Paley and post-Pinochet Chilean writers and purchased a necklace for a friend on Etsy. Then there was the vintage Pleats Please scarf for my mother and the Mizuiro-Ind shift dress for me. I watched comedian Louis C.K.’s famous “Everything’s Amazing and Nobody’s Happy” rant against cell phones and incessant connectivity: “You need to build an ability to just be yourself and not be doing something. That’s what the phones are taking away, is the ability to just sit there. That’s being a person. Because underneath everything in your life there is that thing, that empty—forever empty.”

Because my “research” was vigorous but useless, I was left with nothing at the end of the day. I thought I was defying the void when really I was just changing its outward appearance.

For as long as I can remember, I have asked myself, How do you find peace with inactivity? I have yet to come up with a satisfying answer, though I have pursued the answer in various predictable ways: bad relationships, mindless consumerism, travel, yoga, excessive exercise, psychotherapy, home juicing, binge TV watching, knitting, festive eating, even creative practice. I have come to realize that a lull is not just an occupational problem. It is an emotional, intellectual, and existential one as well. If I ever find an answer, I figure I will feel less fatalistic about intervals, periods of unemployment or dormancy, fallow times. I might be easier on myself and engage in less-anxious behavior. I might achieve the kind of Zen serenity that allows one to sit with unresolved and sometimes aching emptiness, to feel the silence and immensity of the universe without being too rattled by it.

Eve Sedgwick, in therapy for depression after cancer treatment, has a moment of realization: “I’ve figured out what it means when I complain to you about things,” she tells her therapist. “Or to anybody. When I tell you how bad it is, how hard I’ve worked at something, how much I’ve been through, there is only one phrase I want to hear. Which is: ‘That’s enough. You can stop now.’” 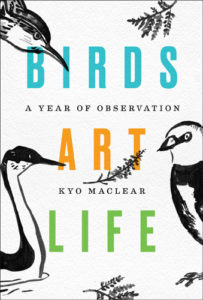 From Birds Art Life: A Year of Observation. Used with permission of Scribner. Copyright © 2017 by Kylo Maclear.

Kyo Maclear is a novelist, essayist, and children’s author. She was born in London, England, and moved to Toronto at the age of four. Her writing has appeared in The Millions, The Volta, The Guardian, and The Globe and Mail, among other publications. Kyo lives in Toronto where she shares a home with two sons, two cats, and a musician.

A Crash Course in YA Taught Me How To Write 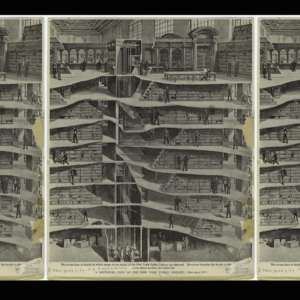 In the second of our new Lit Hub Lonform series, Karen Russell searches for home amid the homeless of Portland, and confronts...
© LitHub
Back to top
Loading Comments...