A Crash Course in YA Taught Me How To Write

Katherine Heiny on Learning Plot, Discipline, and How to Finish a Book

This is how I wrote when I was in my early twenties: I would get an idea or an image for the beginning of a story and I would hope that the rest of the story would sort of suggest itself (this hardly ever happened) and I would try to find a structure that would help the story along (this hardly ever happened, either) and I would start writing and hope I could make the story longer than six pages (this almost never happened) and that the story might have a plot (in fact this never did happen), and then I’d stop writing and go out and get falling-down drunk with all my writer friends (this happened a lot).

Now I’m in my mid—okay, late—forties and while I’m not a fan of the aging process (I recently learned that 50 percent of one’s lifetime supply of freckles appear after age 40 and I’m not sure I have space for them), the good news is that writing gets easier. It doesn’t get easier on its own, but it does get easier. Lots of stuff happened in the intervening 20 years to make it easier. I wrote and published over 20 young-adult novels, for one thing. The very first young-adult novel I was contracted to write was the 24th book in a series of teen romances, and along with the contract (which I signed recklessly, as I was to sign a great many other contracts) was a detailed outline by the original author of the series. I saw right away that this author knew something I didn’t: how to plan ahead. Worries about the structure and plot, which had plagued me for so long, were no longer a problem. And then I realized that the contract I’d so casually signed stated that I needed to write a 125,000-word novel based on the outline and it was due in six weeks, and presto! that took care of the worry about the page-length, and regrettably, also the falling-down drunk part, because it meant I went from being a writer who hardly ever wrote to a writer who wrote all the time. My publisher liked my first book (to this day, I remember none of it, remember nothing but an animal fear of the deadline), and then I wrote the rest of the series (three more books) based on ever-sketchier outlines from the author, outlines that I learned to fill in myself. Then I wrote other books, for other series. Eventually, I was allowed to start several series of my own, under my own pseudonym, based on the publisher’s ideas (these ideas were often vague, like, “We want a series about a group of college kids in Colorado”), provided I showed them detailed outlines for the books in advance.

Before I was really aware of it, I was writing a book every two months. This required me to write ten pages a day, every day, including weekends, and frequently, I finished one book in the morning, and began the next in the afternoon. When I was done with my pages for the day, I often had to revise the previous book or make an outline for a future one, and always there were more contracts for more books and more outrageous deadlines, and I signed them all. My agent drove the price up with each book but it never occurred to me that I could ask for more time. Occasionally I would get very stressed and sleepless, and my voice would take on a distinct quaver, and when that happened, my publisher would send me a box of brownies. (When the first box came, I didn’t know who they were from because the card had gotten lost but my roommate and I ate them anyway.)

This went on for five years, during which time I moved to London, moved back, got married (I wrote ten pages a day on my honeymoon), got pregnant, got tired of writing YA and decided to quit. My publisher responded by offering me a four-book contract for their newest series and complete creative control, and I told them that I was serious about quitting and to please respect my decision, but of course I was very excited by the advance (and the thought of unlimited brownies, now that I knew how much they wanted to keep me) and so I signed the contract. But before I even wrote the first outline, I went into the hospital on total bedrest with my first child. I had to give all the money back and my editor wrote the series instead.

I stopped writing YA books. Actually I pretty much stopped writing altogether because I had two high-maintenance children who don’t sleep much. (When my children were babies, people used to ask me if I was writing anything, and I’d say, “No, but I brushed my teeth today!”) And then my younger child went off to preschool and one day not long afterward, the idea for a story popped into my head, fully formed. I could see the story like a constellation, each twinkling star a scene, and it was clear to me that I would only have to connect those stars and I would get the whole picture. Nothing like this had ever happened to me before! It was like the Rapture! Maybe not just like the Rapture, but no less exciting to me. If I’d been driving, I’m sure I would have had an accident, but luckily I was in the supermarket and the only thing that happened is I rammed some lady with my shopping cart. I went right home and wrote that story like it was a bird that might fly away if I didn’t get it down fast enough.  It wasn’t a very good story but I didn’t really care because two weeks later it happened again—another story popped up. (This time I was driving through a tunnel and since there were no fiery crashes, I guess I stayed in the right lane.) And a few days after I finished that story, it happened again, and again, and again.

It seems clear to me that at some point (if I had to guess, I’d say around the eighth YA book), in an act of self-preservation against the brutal deadlines I drove myself toward, my brain learned how to make something out of nothing, how to take an idea and find the structure and the plot and the narrative and present it to me as a finished product. And now even without the deadlines, my brain keeps doing it, keeps sending me little packages of ready-made stories. I really feel like my brain does this without any help from me, and I’m grateful, oh, man, I’m so grateful. You have no idea.

And so this is how I write now: I get an idea for a story, often the first line (which always stays in the story, but not always as the first line), and the rest of the story comes to me very rapidly, usually in the excited hour or two after the first idea. Right away I can see the characters and the things that happen to them and certain images and lines, and I know the general arc of the story. I can always see the end—maybe not the final line or image, but I can see where the characters are and I know what they’re feeling, it’s just a matter of getting there. Sometimes there are blank spots, but usually as I write, something suggests itself to fill the blanks. And I write long stories now, usually over 30 pages. In other words, now it works just the way I hoped it would work 20 years ago when I sat at my desk, only then my desk was a former girdle-display table (I was a little on the poverty-stricken side) and now it’s a real desk, which I bought with my first royalty check.

And I feel like I should say something about how the more things change, the more they stay the same, but if you’ll excuse me, I have to go get falling-down drunk with my children. Or something like that.

Katherine Heiny is the author of Single, Carefree Mellow, a collection of short stories. Her fiction has been published in The New Yorker, The Atlantic, Ploughshares, Glimmer Train, and many other places. She lives in Washington, DC, with her husband and children. 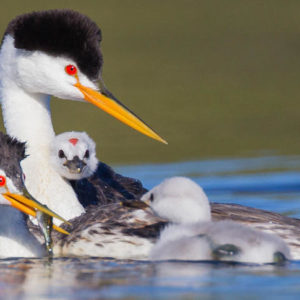 The sky was a pre-storm mauve, the water an oxidized green, and we sat on a public walkway about six feet away from a floating...
© LitHub
Back to top