Jennifer Tseng on the Distance from LA to Martha's Vineyard

But first, you’re nine months pregnant, living in L.A. You’ve doubled in size. Your daily walk has become a slow shuffle. In your new neighborhood, the bougainvilleas bloom, the jacarandas touch the streets with their chalk candy scent. But you don’t notice this. You notice women are selling their services one block away; you notice the neighbor across the street is shot and then disappears. Your father protests, You live in a slum! But you don’t think of leaving. You think, in a few days, you’ll give birth to a child who will call this her home. When, in the afternoons, the same motorcyclist passes blasting Chaka Khan’s “Through the Fire,” you think: Yes! To the limit… to the wire… through the fire! You are here for love.

You don’t think of leaving. Not when the midwife, giggling and eating chocolate with her assistant in the next room, sends you to Cedar Sinai Hospital where over a third of pregnancies end in Caesarean sections; nor when, a statistic, you too are cut open. In the morning your father calls the hospital to congratulate you and tells you he has a tummy ache. Five days later, it takes two grown men to get you up the stairs to the apartment. Your postpartum goal is to walk the building’s perimeter. You feel destroyed. And in a way, you are. You are not the person you were nine months ago. You’re a mother now. The labor of birth has ended and the labor of mothering has begun.

At the four-month mark, an invitation arrives. Would you like to caretake your husband’s family home on Martha’s Vineyard? Until you were married in the garden of said family home, you didn’t know Martha’s Vineyard was an island. You imagined a vineyard not unlike those that dot the coastal hills. What you know is the trees there outnumber the inhabitants and the sea shines out in all directions. What you sense is safety and beauty and the possibility of solitude and so you go. And you are not all wrong. It is beautiful and it is safe but solitude exists there like the fruit of a tree that grows deep in the woods, a tree you can only dream of finding. You are a different person now—no longer part of the mainland and no longer an island separate from others but a piece of earth with another little piece of earth attached to you.

You discover you are the kind of mother who lies in bed for hours, nursing and then sleeping and then nursing again. You are an island in the bedroom, adrift in a sea of milk, in a house on an island in the Atlantic. No one can reach you. It’s been months since you’ve seen the night sky. You write nothing. You care nothing about writing and imagine you will never write again. Your only ambitions are to feed your child and to sleep. You are at once appalled and nonplussed by your own impulses.

You spend your first year on Martha’s Vineyard alternately caring for your child and flying to California to visit your father whose tummy ache turns out to be pancreatic cancer. Once he enters the hospital he never leaves. He is an island unto himself, surrounded by a sea of doctors and nurses and beeping machines. It is a sea you cross willingly, almost involuntarily. Like a migratory bird you fly there again and again, as if you were born to that ancient pathway, born to return to the dying island that bears your father’s name. For hours, you sit next to his bed reading the Bhagavad Gita, mumbling prayers as you chew frantically on sugarless gum, something you haven’t done in years. The sight enrages him: How dare you read a book and chew gum while I lie here suffering.

The hours you are away from your child you spend working at the town library. There is a library in every town on Martha’s Vineyard. For you, this single sentence summarizes the island’s appeal. In a book you will write later, the protagonist Mayumi waxes dreamily, “One is doubly afloat in an island library.” And yet the very notion of an island library subverts the myth of an island as a remote place, disconnected from the rest of the world.

Once, Martha’s Vineyard was connected to the mainland. The early settlers arrived on foot. Somehow these facts make a difference to you. Both the fact that what is now separate was once connected and the fact that people once walked to a place that is now difficult to reach. Hundreds of years later, the two pieces of earth are still marked by one another. They belong to each other, the way two puzzle pieces persist in being part of the same whole, regardless of the distance between them. Today, if you look at a map you can tell by the shape of the two coastlines, they were once interlocking.

A death bed is no place for a baby, your father says, but you disagree. The ending of a story is made bearable, even possible, by the beginning of another. To watch him diminish is made tolerable by watching her grow. He orders you to leave her at home when you travel, but you refuse. Your dying father and your newborn child are the night and day of your existence. You can’t possibly choose between them. That, and you and she are still connected, two pieces of earth connected to make one.

After your father dies and is buried, heartless, you move back to California. The library sends you off with a beautiful white layer cake that you can’t help but see, through your father’s eyes, as elegiac. You feel guilty eating it. It reminds you of the chewing gum, of how, after you spit it out, beyond the curtain that divides the hospital room, you hear a family keeping their father company as he recovers. They are watching a movie and laughing. Through the gap between the curtain and the wall, you glimpse the silver back of a laptop, five sunburned faces huddled close around its screen, a round, white table littered with candy bar wrappers, soda cans, a box of half-eaten donuts. You wonder if they are together now, alive in a park or on a beach, chewing and laughing.

A year later, when you are given the chance to return to the island, you take it. What you did right the first time was work at the library, so you do that again. Everything else is different. You feel lucky. You leave the bed; your child goes to school. Together you walk to the cove; you walk in the woods; you discover a waterfall; you swim in a melted glacier. You see the night sky. You bike to Mermaid and Cackleberry and Green Island farms, you eat ciabatta and ginger cookies baked by the library director and nettles and shishito peppers and greens gathered and grown by librarians and library patrons. You write poems about them. They make you collages and snowflakes and broadsides. You cook for them. They cook for you. The word “home” and the phrase “missed the boat” take on new meaning; you’d rather stay home than risk missing it. Strangely, while living, some would say, stranded, on an island, you feel more connected to a community than ever. Five years pass. And then, around the same time you are invited to write about this island life, the family home is sold.

You don’t want to go. You stay in a short-term rental, you sleep with your child in a friend’s walk-in closet. Together, you try to last the summer. You dread stepping off the edge of the world you’ve known and rejoining the mainland. Though in truth, once you leave the family home, you’re already at sea, displaced from that which once granted you access to island life. When your child cries about your impending departure, you tell her, “Some people save their whole lives for a trip to Martha’s Vineyard. We were so lucky.” but she is unconsoled. It is her home. You make a list of the pleasures of island life and a list of the perils and find the two lists are identical. Isolation. Monk’s sequence. Small constellation. Natural world. The list is everything you love about the island. Later, you will repeat it to yourself and, like a mysterious prayer, it will help you.

By Bastille Day you’re in the Magnuson Camp on Tisbury Great Pond. A friend invites you to her annual party. It occurs to you that the journey is shorter by water than by land—it would be easier to canoe than to bike. You’re delighted by the prospect but your child returns late from her playdate. The party will soon be ending. She and her friend run to the dock while you linger on the grass with the mother. As soon as it’s dark, to everyone’s surprise, the sky lights up with fireworks. The kids scream with pleasure. You and the mother spot an opening in the trees, through which you see first, a fraction of a firework, then a larger portion of another, then an entire blaze of color, perfectly framed by the branches. It takes you a few minutes to understand that the fireworks belong to the finale of your friend’s Bastille Day party. That without even stepping off the island, you are seeing the fireworks from the other side of the water; seeing the island’s magic from a new vantage point. Your leaving has already begun.

When the library director asks you what kind of cake you’d like for your party, you say coconut, as much for the color as the taste. As you write this you realize you were wrong about the color of the first cake. It wasn’t white but a very pale pink. Perhaps you mistakenly remember the cake as white because you feel wedded to the librarians or because your father, for whom white signified death, had just died. This time, however, there is no mistaking the white cake. It suits you. You feel like a grieving bride, like a woman in love who knows she will soon be a widow.

In the dark, where you are now, you and your daughter mistake the sound of the train for thunder. There are no trains on Martha’s Vineyard. It’s a mainland sound. You expect a storm, rain, a change in weather but not these hundreds of people, moving, like you, between one place and another. You ask, Is that thunder? Or is that the train? And she answers, I don’t know. Although she is nine, you still experience moments of astonishment that she possesses the power of speech. She began talking, you realize, the same year your father stopped. She is most like him when she speaks. Like a puzzle piece or a coastline, she is marked by him. You repeat the list to yourself. Isolation. Monk’s sequence. Small constellation. Natural world. You hear her crying. I miss swimming in Seth’s Pond, she sobs. I miss Sydney and the Emerson playroom. You cry too. After you’re both done, you tell her a story that begins, “Once upon a time, you lived on an island…” And then the two of you go, you drift off together, across the sea, to sleep.

For the librarians & readers, poets & artists,
mothers & children, farmers & dreamers,
& the rest of that small constellation,
stars each one. 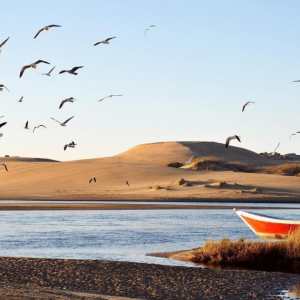 For the next four days Literary Hub will help in counting down the days until the seventh-annual Irish Arts Center PoetryFest...
© LitHub
Back to top