Scottish poetry may have been disappointing us recently, but it’s not all Domhnalls and bad rhymes. The country has a long tradition of great poetry and rousing song, and tonight is the perfect opportunity to make friends with the entire genre again—after all, it’s Rabbie Burns night.

Every year on January 25th, literature lovers across Scotland throw dinner parties in honor of their beloved national poet, Robert Burns, who was born on this day in 1759. The very first Burns supper was held in 1801, on the fifth anniversary of his death, by Burns’s friends, but the gastro-literary tradition has since evolved to mark the occasion of his birth and to include just about everybody in the country (and beyond!). While the formality of these events varies wildly, Burns suppers traditionally follow a specific format that includes the following: Scotch whiskey, some ribald speeches, a fair bit of poetry, and yes, haggis. Attendees should, as they say, “kilt up.” Basically, this sounds like the best evening one could hope for—although I’m not sure how I feel about the haggis.

Here’s how it works: first, the guests are piped in—yes, that means greeted by a bagpiper (or, if a bagpiper isn’t readily available, some fine traditional Scottish music of the recorded type). Next, the host gives a little speech (this is often called the “chairman’s welcome”), followed by a recitation of the Selkirk Grace.

The Selkirk Grace, for your reference:

Now, it’s time for the haggis, which is also heralded by bagpipers, along with a procession consisting of the haggis, resting gloriously on a silver platter, the chef, so proper accolades can be given, the piper, the reader (who will address the haggis), and a whiskey-bearer if you’re classy. During this procession, the guests must stand and clap in time to the dulcet tones of the bagpipe.

Next, the reader must perform the classic “Address to a Haggis,” the ode to the traditional Scottish pudding written by Burns himself, and when the moment is right—i.e. when the knife is mentioned—cut triumphantly into the pudding with a ceremonial knife. At the end, the haggis is lifted on its platter into the air while the assembled guests raise their glasses (these glasses must be filled with Scotch whiskey) and shout: “To the haggis!”

Then, dinner will be served: cock-a-leekie soup, the haggis, of course, with whiskey sauce (whiskey sauce is just whiskey) along with the traditional neeps and tatties, and followed by a traditional Scottish dessert like cranachan. And more whiskey.

Once the food has largely been eaten, the program begins, which follows this basic schedule:

1. A recitation of a Burns poem or song.

2. The immortal memory: A speech celebrating the life, work, spirit and nationalism of Robert Burns, which must end with the traditional toast: To the Immortal Memory of Robert Burns!

3. A second recitation of a Burns poem or song.

4. The toast to the lassies: Originally a thank-you toast to the women who prepared the meal, this has morphed into a humorous speech about the role of women, drawing from Burns’s work wherever possible, which must be ultimately complimentary and which must end with the traditional toast: To the Lassies!

5. A final recitation of a Burns poem or song.

6. The reply from the lassies: The women in the crowd respond to the men’s toast. Another opportunity for laughs.

The host will close events with a message of thanks and lead the diners in a rendition of Auld Lang Syne—written, of course, by Robert Burns—for which they may stand and hold hands.

All of this sounds, frankly, delightful—and I wish we had more literary traditions like this in America. But if you do live in America and don’t have all of the necessary elements for a true Burns supper (haggis, bagpipes, a crowd of people willing to celebrate a great, long-dead poet) at hand, might I suggest a nice meal, a glass of whiskey, and a bit of poetry tonight. In fact, I could celebrate that way any night of the week.

An Incomplete List of Virginia Woolf Puns in Pop Culture 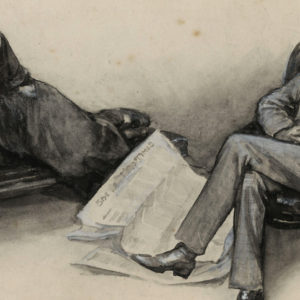 His results, brought about by the very soul and essence of method, have, in truth, the whole air of intuition. –Edgar...
© LitHub
Back to top