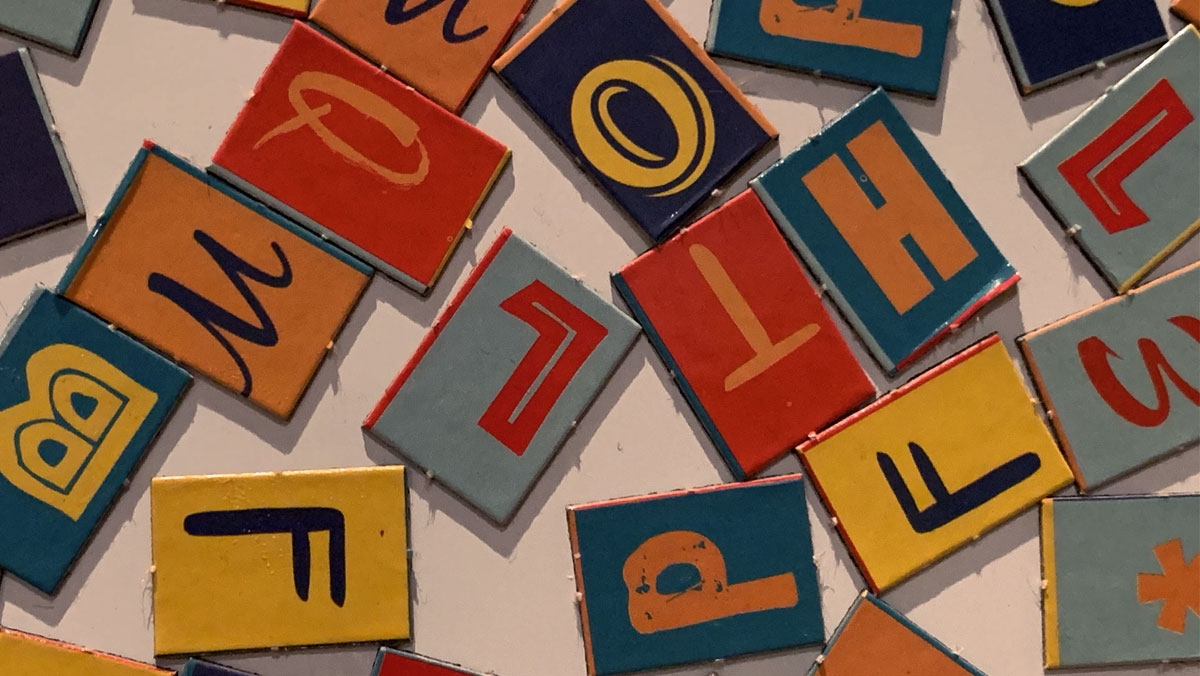 Morten H. Christiansen and Nick Chater on the Solidification of Linguistic Conventions

Languages change continually and in wide variety of ways. New words and phrases appear, while others fall into disuse. Words subtly, or less subtly, shift their meanings or develop new meanings, while speech sounds and intonation change continually. Yet perhaps the most fundamental shift in language change is gradual conventionalization: patterns of communication are initially flexible, but over time they slowly become increasingly stable, conventionalized, and, in many cases, obligatory. This is spontaneous order in action: from an initial jumble increasingly specific patterns emerge over time.

The tendency toward increasing conventionalization occurs in all aspects of language, and it is largely a one-way street. Conventions become more rigid, not less. As in charades, when we face the same communicative challenge multiple times, our behavior becomes increasingly standardized. Once we’ve established a gesture for “Columbus” in one charade, we’ll stick with it in the unlikely event he comes up again, and the gesture will rapidly become simplified.

Yet when we face new communicative challenges, we retain the ability to be tremendously inventive—including the ability to rework and repurpose the conventions we’ve already established. So our “Columbus” gesture, with adornments, might later be reused for “sea voyages,” “the Americas,” “sailors,” and abstract concepts from “invasion” to “navigation” and “discovery,” and many more.

How do these twin forces, of conventionalization for conveying familiar messages and of creative bending and rebuilding conventions to deal with unfamiliar messages, play out in language? To start with, consider one of the most basic aspects of any language: word order. In English, the word order Mary likes dogs tell us that Mary is the subject of the verb (she is the “liker”) and that dogs are the object (they are the “liked”). By contrast, dogs like Mary has dogs as the subject and Mary as the object of their affection. In English, then, the standard word order is Subject–Verb–Object (SVO).

For speakers of English, the SVO order is so familiar that it may seem inevitable. But quite the reverse. There are six ways of ordering three items (S, V, O), and the world’s languages display them all (Figure 4.3). Interestingly, the most frequent order is not the SVO of English and most European languages but the SOV (with the verb at the end of the sentence) of Japanese, Korean, and Turkish.

How does word order get established in the first place? In charades, sequences of gestures can come in any order. But if we use charades to convey who did what to whom, some orders may, perhaps by chance, come to be more prominent. Eventually, one order might even become entirely standard. Once a particular order (such as SVO) becomes established, it will tend to stick—after all, if we violate the expected order, then, other things being equal, we are likely to be misunderstood. And historically, languages do indeed seem to shift inexorably from so-called free word order patterns to increasingly rigid word orders.

Consider the Romance languages, the family of European languages descended from Latin, which includes Spanish, Portuguese, Italian, French, and Romanian. Classical Latin has a free word order: Audentes fortuna iuvat (fortune favors the brave) works just as well in any of the other five possible orders: Audentes iuvat fortuna, Fortuna audentes iuvat, Fortuna iuvat audentes, Iuvat audentes fortuna, Iuvat fortuna audentes. Still, even in classical Latin, some orders tend to be preferred. The standard version of the phrase is in the OSV order: Audentes (Object) fortuna (Subject) iuvat (Verb); yet the more common pattern in Latin is SOV. So, assuming that this SOV word pattern over time would have become increasingly standardized and entrenched, one might expect that the Romance languages of today would have an SOV word order. But that is not how things turned out. Why?

Although the most common pattern in classical Latin was SOV, what really matters is not the literary Latin of Cicero and Julius Caesar but the Latin “of the street.” This Vulgar Latin, which was spoken colloquially throughout the Roman Empire from the second century BC onward, happened to fix upon a different word order: SVO. And it is this everyday Latin from which modern Romance languages have descended, hence inheriting an SVO word order.

Languages, like Latin, in which subject, verb, and object can arrive in any order must include some other way of signaling the difference between subjects and objects (to distinguish between John likes Fido and Fido likes John) because the order of words is so unreliable. A common solution, and one used by Latin, is to mark case. Modern English retains case only in a vestigial form, for example, in the difference between she likes dogs and dogs like her. But Latin’s system of cases is much more complex: it uses nominative case for subjects; accusative case for (direct) objects; and many more cases besides (such as dative, genitive, ablative, vocative, and the rarely used locative case). Cases are signaled in Latin with distinct noun endings, but these endings are always vulnerable to conventionalization and simplification (just as a commonly used charade gesture becomes ever simpler).

So, noun endings erode, and word order becomes increasingly conventionalized. Thus, historically, languages tend to shift from relying on case endings to relying on word order, but not the other way around. Modern English is the endpoint of this trend: the complex case system of Old English has almost entirely disappeared apart from vestiges retained in the pronouns.

Charades may seem a credible metaphor for thinking about the origins of nouns and verbs, which pick out objects and actions—but what about grammar?

But where do case markings on nouns and markings for tense on verbs come from in the first place? How can a process of charades—focused almost entirely on immediate, visible, concrete objects and actions—possibly end up conveying abstract ideas like subject, direct object, or indirect object (in Sunita gave the book to Maya, these would be Sunita, the book and Maya, respectively)? And how can successive verbal charades create the plethora of verb endings for different subjects (I, you, he/she, we, etc.) and tenses? For that matter, where do all the short “grammatical” words (of, to, and, on, by) that glue language together come from? Charades may seem a credible metaphor for thinking about the origins of nouns and verbs, which pick out objects and actions—but what about grammar?

The answer comes from the fascinating phenomenon of grammaticalization: the strange process by which words with concrete, specific meanings transmute into the grammatical machinery of language. The idea of grammaticalization (and research on language change more broadly) was a complete revelation for both of us because we had been trained in the generative approach to language (Chomsky’s “principles and parameters” and its many rivals), which sees language as a vastly complex but immutable mathematical object. Grammaticalization explained how grammatical complexity could emerge, and how grammar was continually in flux.

So, what is grammaticalization? Roughly speaking, it is the series of steps by which collections of individual words that refer to objects and actions gradually mutate into complex systems of grammar, with pronouns, prepositions, conjunctions, verb endings, agreement, and so on. The steps operate on words (or, more broadly, multiword constructions) one at a time, and they follow a (roughly) predictable sequence with a fixed direction. It is from the sum of these changes, and their interactions, that the complexity of language spontaneously arises.

When we face new communicative challenges, we retain the ability to be tremendously inventive—including the ability to rework and repurpose the conventions we’ve already established.

With charades in mind, consider how we might expect this to work. First, and most obviously, if we communicate the same message repeatedly, the signal will become ever more simplified and standardized. In language, we see a relentless tendency to simplify, standardize, and throw away unnecessary complexity, provided that the message is still understood. Simplification over time leads to what is known as “erosion.” So, in English, going to becomes gonna; did not becomes didn’t; and over longer periods of time, erosion can be far more dramatic. Starting with the Latin mea domina (my mistress), we progress through French (ma dame or madame for Mrs.), to English madam, ma’am, mum, and sometimes even just –m (as in Yes’m). Relatedly, erosion collapses forms with communicatively inessential differences. Contrast Early Modern English (the language of Shakespeare and the King James Bible) and Modern English:

I have
thou hast
he/she/it hath

I have
you have
he/she/it has

we have
ye have
they have

we have
you have
they have

Here, thou and ye have fused into you (the singular/plural distinction has gone); hast has disappeared, and hath has mutated into has.

But the sheer scale of erosion in English becomes clearer when we look further back in time. The path from Old English (the language of Beowulf and the Arthurian legends) through Middle English (the language of Chaucer) to the English of today is a story of collapsed distinctions and lost endings. Old English, like Latin, had a relatively free word order, and nouns had a complex system of case markings (nominative, accusative, genitive, dative, and instrumental) to signal who was doing what to whom. It had three grammatical genders that applied not just to nouns but to demonstratives and adjectives. So, the Old English equivalent of that good woman would have the neuter gender (not feminine, as it happens, because wif [woman] is neuter) signaled for each word. 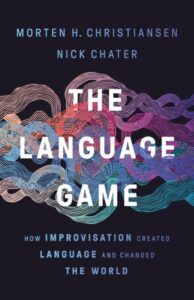 Excerpted from The Language Game: How Improvisation Created Language and Changed the World by Morten H. Christiansen and Nick Chater. Copyright © 2022. Available from Basic Books, an imprint of Hachette Book Group, Inc.

Morten H. Christiansen is the William R. Kenan, Jr. professor of psychology at Cornell University as well as a senior scientist at the Haskins Labs and professor in cognitive science of language at the School of Communication and Culture, Aarhus University, Denmark. He is the author of more than 200 scientific papers and has edited four books. He lives near Ithaca, New York.

Nick Chater is a cognitive psychologist who is a professor of behavioral science at Warwick University and has held chairs in psychology at Warwick and at University College London. He has written over 250 publications, has won four national awards for psychological research, and has served as associate editor for the journals Cognitive Science, Psychological Review, and Psychological Science. His previous trade book, The Mind is Flat, won the Association of American Publishers PROSE Award for Best Book in Clinical Psychology, 2018. He lives near Warwick, United Kingdom. 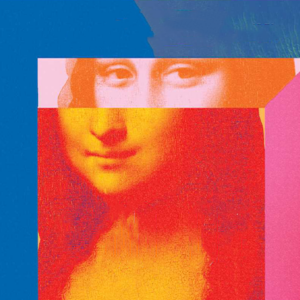 If March’s speculative new releases came in like a lion, it stands to reason that we’re going into April like a lamb—but,...
© LitHub
Back to top
Loading Comments...