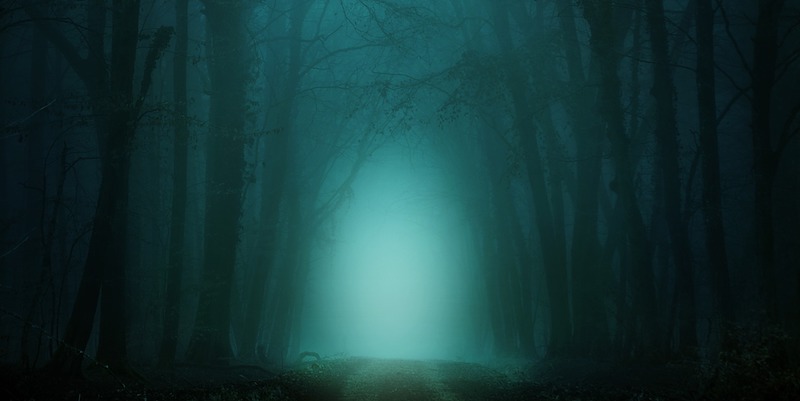 “There’s a ghost deer where I live.”

Where I live there is porcelain in the dirt. Broken shards of dinner plates decorated in elaborate designs of every color. Often, they are hidden from sight until a rain comes hard enough to wash them clean. We collect them by the handful and balance them on our windowsills. We let our daughter play with the ones not sharp enough to worry us. It’s hard to understand why they are here so far away from anything. We live in the woods. Surrounded by trees. The smell of leaf fire is often the only sign that there are other people living nearby.

I imagine these bits of porcelain were laid here years before I was even born. Arranged in beautiful mosaic patterns. I imagine someone knelt as if praying, her hands slow and silent, placing each piece against the damp earth. I imagine the fog of her breath in winter. A whisper.

There’s a ghost deer where I live. Her body is so white I imagine that in a strong wind she would disappear like smoke. The only albino deer I have ever seen. At night she sometimes stands motionless in a field watching us. Waiting for us to get close enough for her to have to run. She’s been here for years. I can’t understand how she has survived so long having no way to hide herself. I assume she must be magic.

Across the river from where I live, the hills have taken the shape of wolves. When the leaves come in, they look like quiet dogs laying with their paws beneath their jaws and their ears up listening to the flow of the current. I imagine that one day they might stand, shake themselves awake and lap at the river until it is dry.

When it rains here, bones come loose from the bank of the river. They join the water. I think that maybe bone is something that can grow out of sacred dirt. I think we are standing on somewhere special.

I think that when writing fiction, it important to take a detail and imagine a world around it.

But the reality of this place is not what I imagine. I’ve spoken to neighbors and the ranger at the park down the road. I’ve learned that there used to be a hog farmer that lived here who fed his animals on the food scraps and trash he collected from the dumpsters of local restaurants. The hogs ate everything but the broken bits of plates the dishwashers threw away.

Albino deer are fairly common; a few are born every year and never survive long. The ghost deer I see a few times a year isn’t magic. Most likely, she isn’t even the same deer I saw the year before. She lives just long enough to be seen once and then never again.

The hills across the river are just hills. The leaves die in the fall and then they only look like hills again.

This dirt doesn’t grow bones. The native American tribes that used to live here believed it was important to bury their dead forever beside moving water, and now people come here when it rains and steal them as souvenirs.

The reality of this place is not what I imagined.

When writing stories, I’ve come to understand that I am just as much interested in what can be imagined as what is true. All the stories in my collection are influenced by this place where I live: by the place that it is, and by the place that I imagine it could be.

I think that when writing fiction, it important to take a detail and imagine a world around it—take a broken bit of porcelain and wonder where it came from, who put it there, where was it before it was dropped in the dirt. What the edges feel like against the tip of a finger. Who found it there and where they will take it when they leave this place.

It’s important to wonder where the ghost deer sleep and who sees them when they stand quiet in the falling snow. What sounds and smells surround them.

What if the hills were actually wolves? How would the current of the river change when those dogs breathed? I try to imagine families walking along the hills of the wolves’ backs and what they would say to each other in the last light of the day as they felt the bodies beneath them exhale.

How quiet do bones sink when the slip from the earth and fall into moving water? What was said when the dirt was put over their graves so long ago? Who would come here and take them away from this place? Where would they take them and what would they say when neighbors found them displayed like artwork on a fireplace mantle?

Where I live there is porcelain in the dirt. There are deer the color of ghosts. Wolves and bones.

I believe that the stories we write, that we imagine, can come from the things we see around us every day. We can understand what they are and dream what they could be. We can make them whatever we want and hope that the words we put down on the page can in some way become true. 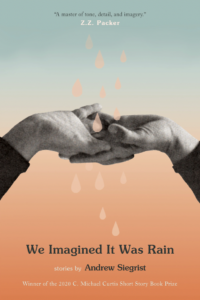 We Imagined It Was Rain by Andrew Siegrist is available via Hub City Press.

Andrew Siegrist is a graduate of the Creative Workshop at the University of New Orleans. His work has appeared in The Baltimore Review, Arts & Letters, The Greensboro Review, Pembroke Magazine, Fiction Southeast, Bat City Review, and elsewhere. He lives on the Cumberland River outside of Nashville, Tennessee. 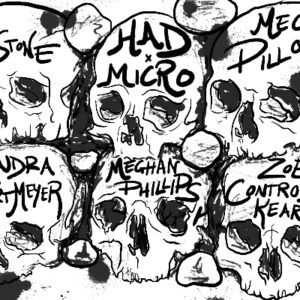