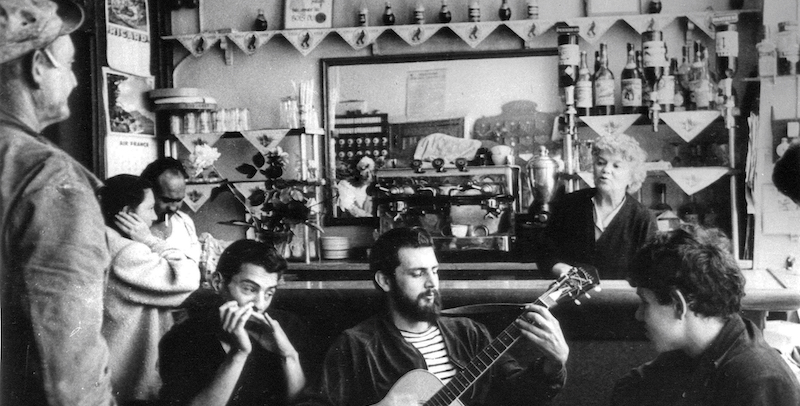 Sophie Wilson on the Co-opting of a Counterculture

William Burroughs once said that On the Road “sold a trillion Levi’s.” The iconic denim brand is just one of the fashion companies to benefit from the disaffected, worn-out look popularized by the Beat Generation. The group of writers—including Burroughs, Jack Kerouac, Allen Ginsberg and Gregory Corso—were staunch anti-capitalists who railed against American materialism, but that didn’t stop them from setting the tone for style in the 20th century.

Blue jeans, white t-shirts, workwear jackets and battered canvas holdalls were practical essentials for a life on the road, and they soon came to define the uniform for a generation of post-war youth disenchanted with traditional values. Along with counterculture icons like James Dean and Bob Dylan, the Beat writers spearheaded a look that became associated with alienation and rebellion. The movement—a reaction to mid-century, mainstream American society, which valued conformity and consumerism above individuality and freedom of expression—expressed their anti-establishment values through the way they dressed.

In the 1940s and 50s, casual wear was certainly more acceptable than it had been in the past, but men in America were still generally expected to wear suits at work and most social events. In contrast, the Beats’ sartorial vocabulary was rooted in dressed-down functionality. Many of the Beat writers were very poor—Kerouac grew up in a working-class immigrant family in the mill town of Lowell, Massachusetts—so this functional style was often born from necessity rather than it being a conscious fashion choice. Their wardrobes also featured purposeful nods to bookish academia and the modern jazz artists who sound-tracked the movement, such as Charlie Parker, Dizzy Gillespie, and Thelonious Monk. The thrown-together style they championed continues to echo through college hallways today.

The women of the Beat Generation are often undercredited, but writers like Diane di Prima, Joyce Johnson, and Hettie Jones also pioneered the counterculture wardrobe. Their look was the antithesis to Christian Dior’s New Look, which reintroduced opulence and ultra-femininity to womenswear in the post-war period. Cinched waists and full skirts reigned supreme, setting the tone for women’s fashion throughout the 1950s. But, for Beat women, black jeans, capri pants, and pencil skirts, paired with silk shirts and oversized sweaters, defied the popular hourglass fashions of the 1940s and 50s.

Inevitably, the style of the Beat Generation was heavily satirized and co-opted by the mainstream. “Beat” became a caricature in the popular imagination—think pretentious youths in black turtlenecks smoking and writing in French cafes. An early hint at what would be regarded by the mainstream as beatnik style came in 1956 musical Funny Face, starring Audrey Hepburn. In one scene, Hepburn dances around a smoky Parisian jazz cafe dressed head to toe in black, in tight pants and a polo neck sweater.

The characters of On the Road dress principally in tattered essentials.

The term “beatnik” was coined in 1958 in a derogatory column in the San Francisco Chronicle by journalist Herb Caen. Caen wrote, “Look magazine, preparing a picture spread on San Francisco’s Beat Generation (oh no, not AGAIN!), hosted a party in a North Beach house for over 50 Beatniks, and by the time word got round the sour grapevine, over 250 bearded cats and kits were on hand.” Kerouac hated the word “beatnik” and, when he ran into Caen at a nightclub, he begged him to stop using it. “You’re putting us down and making us sound like jerks. I hate it. Stop using it,” he said.

But the word and the image it conjured were here to stay. At the end of 1959, The Village Voice ran an advertisement for “Rent-a-Beatnik.” Initially a joke, the first ad ran, “Add zest to your Tuxedo Park Party…Rent a Beatnik! Completely equipped Levi’s, frayed shirt, sneakers, or sandals (optional.) Deductions allowed for no beard, baths, shoes or haircut. Lady Beatniks also available, usual garb: all black.” The ad was taken seriously and suburban party hosts started renting Beatniks for $40 per night. Various poets, writers and artists did rent themselves to these events because they were an easy way to make money and thus the beatnik look was firmly established in the popular imagination. 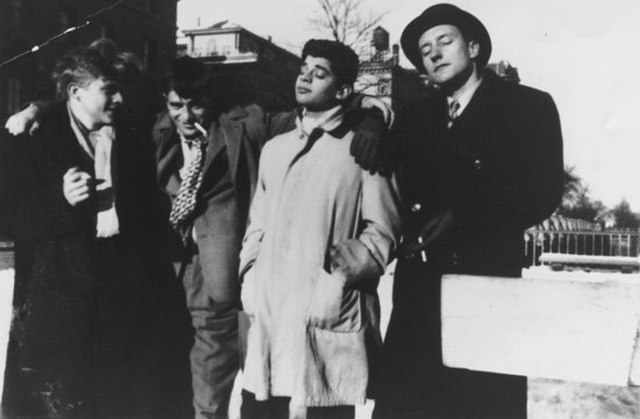 Since then, this style has been imitated and reimagined by students, artists, and fashion designers, all with varying levels of sincerity. While the fashion of the Beat Generation provided a stark opposition to the Dior aesthetic that dominated US fashion in the 1950s, the brand’s most recent men’s Fall 2022 collection directly referenced Kerouac and On the Road. Creative director and bibliophile Kim Jones, who previously created collections inspired by Virginia Woolf and the Bloomsbury Group for Fendi, paid homage to literary inspirations once more this season. Garments and show invitations included original cover art from the first editions of Kerouac’s On the Road and Visions of Cody.

The mammoth original transcript for On the Road, that Kerouac famously wrote in a frenzied Benzedrine-and-coffee-fueled 20 days, was unfurled along the runway. As for the clothes themselves, Jones wanted the collection “to feel a little bit like a suitcase you might take on a road trip.” As such, classic blue jeans were paired with t-shirts featuring book covers while preppy sweaters, sheepskin jackets, and Columbia University football jerseys referenced the Beats’ college days. The collection got the stamp of approval from Kerouac’s estate, with Jim Sampas, Kerouac’s nephew and literary executor of his estate consulting with Jones on the project.

It’s not the first time that fashion has turned to the mid-century literary movement for inspiration, although the influence is often subtler; the look is now so embedded in our cultural consciousness that it’s ripe for constant reinterpretation. Its influence could be felt in Dior’s Fall 2005 collection, when John Galliano reimagined the beatnik uniform in black and white mohair dresses, black caps and knee-high boots. At Chanel’s pre-fall 2018 show, the beatnik woman was evoked once more in chunky sweater dresses and sailor pants. It can feel jarring to see high fashion brands turn out collections inspired by such an anti-consumerist movement. In his poem Howl, Allen Ginsberg calls fashion “the tanked up clatter of the iron regiments.”

Clothes were sometimes viewed as a burden, an oppressive necessity for conforming with society.

The characters of On the Road dress principally in tattered essentials. Kerouac frequently draws attention to the clothing of the novel’s hero, Dean Moriarty, writing that “his dirty work clothes clung to him so gracefully, as though you couldn’t buy a better fit from a custom tailor but only earn it from the Natural Tailor of Natural Joy.” Despite the necessity for a largely ascetic lifestyle on the road, Kerouac was interested in what people wore, at least insofar as what it could tell you about that person.

A fascination with the garb of jazz singers, field workers, and cowboys reappears throughout the novel. Moriarty is often compared to a cowboy, a figure Kerouac uses to symbolize unrestrained, individualistic freedom. His first impression of Moriarty is as “a young Gene Autry [the entertainer known as ‘America’s favorite cowboy’]—trim, thin-hipped, blue eyed, with a real Oklahoma accent—a sideburned hero of the snowy West.”

At the same time, clothes were sometimes viewed as a burden, an oppressive necessity for conforming with society. “I want both of you to do as I’m doing, disemburden yourself of all that clothes—now what’s the sense of clothes?” suggests Moriarty, who is often described as being in a state of full or semi-nudity. The Beats wore clothes until they were falling apart. What they wear is described as “battered,” “ragged,” or “wretched.” But not caring was a statement in and of itself.

This attitude has persisted today in the sartorial choices of students, writers, and artists who dress themselves with a sense of cool indifference—and the functionality of this style also resonates in an era where sustainability is an important element of the conversation in fashion. Now, as then, what we buy and what we wear has a political weight to it. Buying less in the 21st century is often motivated by environmentalism, a continuation of the anti-capitalist legacy of mid-century counterculture.

In the era of fast fashion and tech billionaires, the anti-establishment energy of the Beats feels as urgent today as it did then. Of course, what we buy and what we wear are just two ways to articulate these feelings. Additionally, social conventions around what is acceptable and unacceptable to wear in certain situations has changed a lot since the 1940s. However, the style of the Beat Generation clearly lives on, whether at university campuses and late-night cafes or the Dior runway. The Beat writers might have had conflicted thoughts about becoming fashion icons, but there’s no denying their impact on the wardrobes of young rebels, with and without causes, to this day.

Sophie Wilson is a fashion and culture journalist whose writing has appeared in titles such as Vogue, Vice and W Magazine. She currently lives in the UK and studied English Literature at the University of Sheffield before going on to receive a Masters in Fashion Journalism from Central Saint Martins. 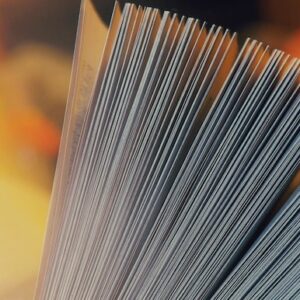 In Buddhist thought, the ego is the source of all human suffering. Dukkha comes from clinging to impermanent things, which...
© LitHub
Back to top
Loading Comments...