Jason Gots on Awe and Connection in the Church of Art

In Buddhist thought, the ego is the source of all human suffering. Dukkha comes from clinging to impermanent things, which begins with clinging to the self. From early childhood, we are driven biologically and psychologically to seek out the things our bodies want, ignore the things they don’t care about, and avoid the things that bother or threaten them. In a recur­sive loop, these attachments continually reinforce the ego—our sense of the reality of self.

The whole of Buddhist practice can be seen as a curriculum for moving away from ego and toward a permanent state of kenosis, which Buddhism calls Nirvana. Whether or not you buy that enlightenment is achievable, the curriculum is clearly structured (in ancient texts like the Sat­tipatthana Sutta) to lead the practitioner progressively toward a view of self (and all things) as interdependent, contingent, and impermanent—no more real in their separateness than a wave in the ocean.

At first this struck me as a very cold and inhumane perspec­tive to aspire to. How could you live in the world thinking of everything, yourself included, as an illusion? But for the Buddha, kenosis doesn’t lead to indifference—it leads to compassion. As the story goes, upon achieving enlightenment, freed from the ego’s narrow concerns, he sees at a glance the suffering of all sentient beings, caught between reality and illusion, struggling in the chains of selfishness and greed. He’s moved by our pain and our desire for freedom. Instead of vanishing into nothing­ness, he returns to the world to teach.

Kenosis has been described and facilitated a thousand differ­ent ways throughout history by the faithful of sects and practices ranging from Sufi whirling dervishes to young people at rock concerts. Accounts of the peak experiences of religious vision­aries, artists and art lovers, users of psychedelics, hikers in the mountains, scuba divers, and more have so much in common that science has begun to take an interest. At the Center for Psyche­delic and Consciousness Research at Johns Hopkins University, Dr. Roland Griffiths and his colleagues are currently studying these spiritual experiences of ego transcendence—whether in­duced by prayer or by psychedelics like psilocybin—and find­ing that they produce similar (and significant) benefits to mental health.

Kenosis is almost always accompanied by a sense of awe and connection to a larger whole: the rest of humanity, the atoms in the chair in front of you, Brahma, the “sacred geometry” of the universe—the specific imagery matters less than the sense of non-duality from everything you normally think of as “not-you.” A state of trust, acceptance, and connectedness, kenosis is the antidote to meanness of spirit.

People have done and continue to do terrible things in the name of every religion, as they do in the name of democracy, family, a better tomorrow, business, and so much more. Fol­lowing Armstrong’s logic, the worst offenders are invariably the most orthodox, from the Theravadan Buddhists of Myanmar to the Islamic State, to the Christians of the Inquisition, the Crusades, the Salem Witch Trials, and homophobic hate cam­paigns. But kenosis, wherever it appears, is a force for positive change in the world.

In the ancient and the modern world, poetry, music, phys­ical movement, and psychedelics like ayahuasca, psilocybin, psilocin, muscarine-containing mushrooms, and the mescaline-containing cactuses have all been known as catalysts for kenosis.

In ancient Greece, at festivals in honor of Dionysus (Roman: Bacchus), the god of wine, alcohol was used as a spiritual solvent, dissolving the boundaries between his followers and their god. As music producer and ethnomusicologist Christopher C. King explains in his book Lament from Epirus: An Odyssey into Europe’s Oldest Surviving Folk Music, remote mountain communities in Greece today still continue this tradition at all-night festivals where music and drink blur the boundaries between performer and audience, self and other, self and the natural world.

Encountering my late sister Meri again at my first ayahuasca retreat was an instance of kenosis. I lay down guilt, doubt, and shame and—with the help of the medicine—relaxed into the sense of her presence. For an hour or two I was no longer the brother who hadn’t managed to save her or who couldn’t love her enough to mourn her fully. My attention was no longer a closed-circuit TV, turned inward—it was open and connected to my sister, and through her to everything else. Like a baby floating in its amniotic sac, I was nobody, and I belonged.

But the first experience of kenosis I can remember happened to me much earlier, in high school. It was in a ninth grade English class where we were studying poems by three long-dead English writers: John Donne, Robert Herrick, and William Shakespeare.

I guess my brain was wired to love language and it must have been the right developmental moment to make the leap, but my teacher did two things that helped transform these words on a page into scripture. First, she had us read each poem aloud—slowly and more than once. Second, she showed us how these writers used wordplay and metaphor to create cunning, multi­dimensional structures. If you read them with the right kind of attention, they unfolded like one of those giant, alien flowers from The Day of the Triffids, a classic sci-fi movie my dad once made me watch, and—just like those alien flowers—swallowed you whole.

Kenosis is like falling in love. Nothing in the world exists besides the source of that extraordinary experience.

I remember going line by line through Shakespeare’s son­nets, practicing this new form of exegetical magic. On a first reading, I understood nothing. Some of the music might have caught my ear: “Rough winds do shake the darling buds of May.” Nice. But the meaning lay so tightly coiled in the poem that the mind slid right off the shiny surfaces. Words, words, words. The second reading was trickier. The mind stood at military atten­tion: What is the theme? What is the subtext? What, exactly, is this poem about? The poet and writer Robert Macfarlane told me that many of his literature students at Cambridge, brilliant as they are, arrive as freshmen armed with this kind of critical ap­paratus, eager to flay a poem alive but unable to allow the poem to do the same to them.

The trick to the second reading lies in what the Zen Buddhist master Kōshō Uchiyama called “opening the hand of thought.” This reading is a leap of faith, and like all true faith, it’s born of experience. The growing awe of language John and I shared was part of that experience and the teacher’s scaffolding gave us the rest. We took her at her word that there were hidden dimen­sions of beauty in this writing, and that they couldn’t be pried out of it under torture.

So on the second reading we aimed for a state I would now call meditative, resting what Buddhism calls “bare attention” on each word, each line, and allowing the meaning to blossom forth. With this kind of “right mindfulness,” consciousness goes to work on itself, gradually unraveling its own confusion.

In childhood, imaginative play is second nature. “Losing yourself” in a game of tag or a fantasy story is an everyday experience. I would argue that kenosis is truly possible only after what the great child psychologist Jean Piaget called the “concrete operational” phase of development, that period from roughly seven to eleven years old when we’re fascinated with reality, justice, and the physical world. During this phase kids leave behind what Piaget saw as the strong egocentrism of early childhood.

But in the process they paradoxically become more self-conscious—more aware of the differences between them­selves and everything else. By twelve, when many kids are en­tering middle school, they are often too rigid in this thinking to slip easily into and out of fantasy worlds. Friendships don’t just happen—they have to be negotiated. Kenosis is the spiri­tual act of crossing that gulf in reverse—returning to a state of unselfconscious innocence.

It’s one thing to be subject to magic, another to understand how it’s done, and still another to find its power enhanced, not diminished, by that knowledge.In those years language took hold of John and me in a different way than it ever had before, and we took hold of it. And as with everything else that’s ever moved me, I couldn’t shut up about it.

Not everyone was interested. In many people—my dad among them—poetry and literature didn’t produce much kenosis.They were important in theory but much less important in fact than the evening news or what time to set the alarm clock for work in the morning.

That’s the tricky thing about kenosis. If you can’t resist the explanatory, evangelical urge, the ego comes roaring right back, stronger than ever. While annoying everybody you meet with your conversion story, you will learn that people have other in­terests and priorities that don’t remotely include John Donne. Faced with their indifference or pushback, you will feel like one of the biblical prophets out in the wilderness, crying, “Repent! Repent!” You’ll wonder what’s wrong with these people. Why they can’t see transcendence when it’s staring them right in the face. You will come to the conclusion that only you and a se­lect group of seers possess the true knowledge and that every­body else is an idiot.

Kenosis is the spiri­tual act of crossing that gulf in reverse—returning to a state of unselfconscious innocence.

This is terribly sad, of course. Because in doing so you will have taken that sense of universal connectedness and turned it into plate armor for the ego. A walled garden with no doors or windows.

Basketball, math, entrepreneurship—all of these were more or less closed books to me. In all of them kenosis was possible, just not for me. So I pledged my soul to the Church of Art and decided that everything else was a total waste of time.

I wanted to climb to the top of the (as yet unfinished) Na­tional Cathedral and sing these poems out to the world. I wanted everyone to stop dead in their tracks and listen. And I wanted some of that magic for myself.

My first girlfriend politely ac­cepted a string of sonnets she had inspired: horrible doggerel in the early John Donne mode of “we’re all going to die one day, so let’s sleep together now.” Luckily for both of us, the poems were incomprehensible.

Kenosis is like falling in love. Nothing in the world exists besides the source of that extraordinary experience. This is especially true of young kenosis. As with love, it takes years to learn that you’re not automatically worthy of the gift. It comes with responsibilities. It demands patience, humility, empathy, hard work. And if you want to nurture and sustain it in a world that’s pulling you in a thousand different directions, you need to understand the physics of those forces. In other words, you have to grow up. 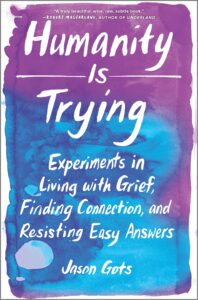 Excerpted from Humanity Is Trying: Experiments in Living with Grief, Finding Connection, and Resisting Easy Answers by Jason Gots © 2022 by Jason Gots. Used with permission from Hanover Square Press/HarperCollins.

Jason Gots hosted and produced the podcast Think Again and created the new podcast Clever Creature. He is living proof of the Cheshire cat’s promise to Alice that if you keep going long enough in any direction, you’re bound to end up somewhere. 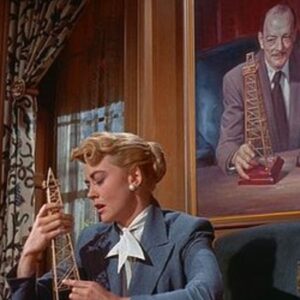 The year 1956 saw the film releases of Written on the Wind and Giant, both about Texas, both about oil, and both starring...
© LitHub
Back to top
Loading Comments...