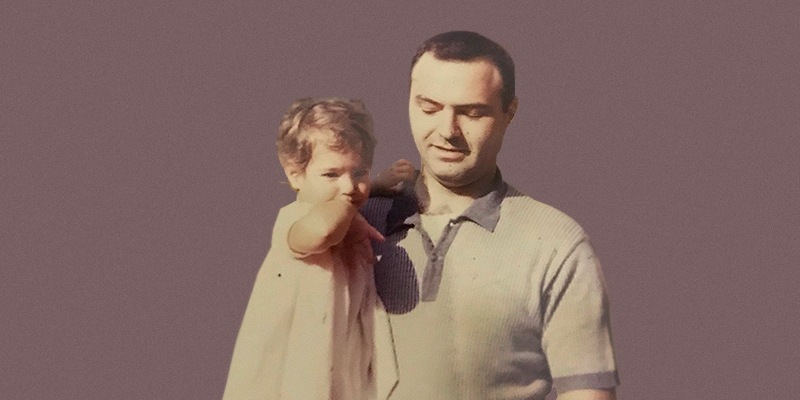 The author and her father. Photo by Mickey Shapiro.

"I Couldn't Be Happy and Be What He Wanted"

“You gonna sell your poems on the sidewalk?” asked my father.

A conservative Midwest doctor, he couldn’t understand why, at 20, I was moving to New York to get my masters in fine arts. Though I’d inherited his dark humor and hair, he favored my brothers, who shared his politics, lingo, and passion for his profession. A brilliant diagnostician, he used to punctuate our dinners with The Disease Game.

“Schistosomiasis,” Brian replied. “Pass the potatoes.” My redheaded mom would beam, proud of her science-brain boys.

Left out, I hid my hurt in spiral notebooks. “I pretended chest pains / so you’d hear me with your / stethoscope, hold me up / to your lit screen and see inside,” I scrawled, poetry my internal medicine. When Dad handed his study skeleton to my brother upon his medical school acceptance, I saw only the metaphor: “That night father gave you his bones.” My father hated being my subject. But I couldn’t stop portraying him as provocative, intense, hilarious. He was my best character.

After a bad hip replacement forced him to use a cane, he became more cantankerous and even more difficult to please. (Think: a Hebrew Dr. House.) I was a failed poet, stumbling for decades work-wise before I found my footing. It didn’t help that he called the personal essays I published “fiction,” detested my novels, and trashed journalism, pointing out how little left-wing papers paid. When a Penthouse editor assigned me an entertainment profile for $5,000, Dad joked, “Why don’t you pose for them too?” He once emailed me, “Move home. I’ll still pay for medical or law school.” He did seem  thrilled when Random House published my first memoir at age 43. Until he read it.

“Stop spilling your guts in public!” he emailed.

But I couldn’t be happy and be what he wanted. Growing up, my grandfather Harry had pictured my dad as a future partner of Harry’s Window Shade Store on Delancey Street, the sole Jewish parent in the world who was actually disappointed his son wanted to be a doctor. A stubborn Shapiro, I wouldn’t give up my path to pacify my patriarch either. Luckily, Dad was delighted when I married Charlie, a supportive, older scriptwriter who moonlighted as a professor, like I had started to. To my father, who’d taught medical school, teaching was “a real job.” Meanwhile, in my night classes, students worried their work might offend relatives.

“He called the personal essays I published ‘fiction,’ detested my novels, and trashed journalism, pointing out how little left-wing papers paid.”

“The first piece you write that your family hates means you’ve found your voice,” was my favorite rule, along with “Lead the least secretive life you can.”

My father countered, “Repression is the greatest gift of the human intellect.”

Promoting a series of splashy autobiographical books through my 40s, I posed in a black dress and stilettos on my rooftop, against the skyline of my father’s old haunts. Translated into a dozen languages and touring the country, I felt invincible. But when a hardcover I’d spent years on didn’t sell well, I lost my editor and publisher. Like Icarus defying his father by soaring too close to the sun, my wings were singed as I tumbled out of the sky.

Worse, right after my half-century mark, Dad had a near-fatal heart attack. At 80, he went from doctor to patient at his own hospital. I was afraid his recuperation would make it even harder for us to communicate. I desperately wanted his approval before it was too late. As my mom and brothers kept a vigil post-surgery, I anxiously over-exercised, damaging my back and making it impossible to fly at all.  Grounded, I gained weight, tottering to classes where once my legs sped.

Dad and I always got along best if I had a physical ailment he could cure over the phone. Searching the subculture of Manhattan spinal specialists, I asked my newly-retired recovering father to help navigate the terrain. He gleefully belittled each expert long distance. After the orthopedic surgeon pushed steroid  injections, he emailed “If he can’t cut ‘em up he’ll shoot ‘em up.”  He dismissed the physiatrist prescribing Oxycodone: “Try heroin while you’re at it.”  Of the expensive chiropractor who “realigned” my back: “Glad that moron didn’t kill you.” Dad vetoed the neurologist’s EMG needle test he christened “New Age claptrap.” Another doc scheduled an MRI at his uptown hospital at 6 a.m, my idea of hell. A squeamish night owl, I’d surely get claustrophobic in the tomb-like tunnel at the break of dawn.

“I know what you can do,” Dad said. He found me a nearby clinic with a coverless, sitting, “open MRI” that had an evening appointment available. I felt protected with him as my guide and translator, teaching me the language of my scary new world.

“Dad and I always got along best if I had a physical ailment he could cure over the phone.”

“Get me a printout,” he said after my magnetic scan. “Let’s see what we’re up against.” I was touched by the “we,” feeling my back injury also hurt him, the way the impairment of his heart somehow weakened mine. While other doctors said “pulled muscle,” “ inflammation,” “ sprain,”  Dad insisted I’d torn ligaments. I preferred “tear”;  the verb sounded extreme. I felt honored that he was the one who diagnosed me, as if only he could see what was wrong inside.

When I could finally visit my childhood home for his birthday,  he was wearing the black Nike tracksuit I’d sent him, his strands of unruly white hair falling, Einstein-style, around his still-handsome brown eyes. Seeing the savage chest scar of his surgery, I felt bonded; we were both wounded, worse than ever before.

“My little girl really hurt herself this time,” he said, hugging me.

I teared up thinking I was still his little girl at 50. “Maybe physical therapy will help?” I asked.

“Something to do while it heals itself,” he responded. “It’ll give you the illusion of control.”

He understood control freaks: we were alike that way.

At a Manhattan rehab center in my neighborhood, in my sweats and an oversized top, I was self-conscious when a young practitioner with a foreign accent had me lie flat on a table. Reading my chart, he said “Kickboxing? At your age?” I felt ancient.

“Why don’t I just kill myself now?” I asked.

“No! Do not.” Kenan looked alarmed, missing my sarcasm. Then he asked for the MRI printout I’d forgotten.

“My dad has a copy of my scan. I’ll call him.” No matter my age, I still wanted my father to save me.

“Hi, Daddy,” I regressed. “I forgot my MRI scan. Kenan, the physical therapist, needs to know which disc I tore before he treats me.”

“Good, someone with a brain,” Dad said, getting on the phone with him for ten minutes. It felt sweetly old-fashioned, like this guy needed Dad’s permission to approach his daughter.

“No matter my age, I still wanted my father to save me.”

To ease my discomfort during exercises with Kenan, I fired off questions, like the journalist I was. His story of exile from Bosnia at 12 during the Balkan War, with his neighbors turning on him, knocked the edge off my self-pity. I helped him publish an essay on returning to his homeland to face down his betrayers that led to interest from a literary agent. When I sent it to my dad, a history buff, he emailed back, “Chilling. They didn’t hang enough of the monsters who killed for blood lust. This story needs to be heard.”

“Wow. As we say in Bosnian, ‘No hairs on his tongue,’” Kenan said. “Your father’s words have power, like yours.”

I never noticed that I’d mirrored Dad’s linguistic intensity, how he’d speak his mind fearlessly, obliterating small talk, unconcerned whom he’d offend. As we were both on the mend, Dad sent articles comparing the Serb’s ethnic cleansing campaign to Nazis who wiped out our Eastern European relatives. Since English wasn’t Kenan’s first tongue, he asked me to coauthor his memoir.  With my father’s encouragement, I agreed, getting Dad’s opinion on rough drafts.  “Well done. But not politically correct,” he’d respond. “Add more about World War I history for context.” I did, cc’ing Dad on all revisions, as if he were our ghost editor. I liked to think he was the secret weapon that helped us sell the book to a top publisher.

Kenan was awed that Dad, a Lower East Side street kid, had struggled to become a hospital chief of medicine, paying the college tuitions of his four kids, and setting up educational trusts for his five grandchildren. Seeing Dad through different eyes, I was too. Despite hating what I did for a living, he helped pay my rent for years. His worst fear was that I’d be poor in Manhattan, like he’d been. The creative dreams he’d disparaged were only possible because of him.

Reading the Bosnia book, Dad emailed, “Proves how sharp and diligent you are. This gives me great pride.”

I was overjoyed. Then I realized it was because the project shared the story of someone else’s family, not ours. I laughed to think Dad preferred my words told through a male narrator, depicting war. He was relieved not to be my subject.

Alas his cardiac problems worsened. We spent his next birthday at the hospital, his former domain. On my way there, I received a missive from Olaf, his doctor. “Your father said you might assist an aspiring writer,” Olaf wrote. “If you have any time, I could use advice.”

“You fix my Papa, I’ll fix your pages,” I told Olaf, meeting with him in the lounge during my father’s 19-day stay.

I was so relieved when Dad returned home. I walked into his den and found him sitting at his computer, yelling at his insurance carrier over the phone, the lion in winter. It tickled my father that I had helped his doctor Olaf publish his first piece in a magazine where my former student was editor.

“So what did you tell Olaf about me?” I asked.

“How proud I am of my daughter, the successful Manhattan book author and generous professor.”  He smiled.

“Why don’t you ever tell me that?”

“The creative dreams he’d disparaged were only possible because of him.”

Months later, my brother Brian called to say Dad had been rushed to intensive care. Right before we lost him in December of his 85th year, he recited Poe’s “The Raven” to the nurses and physicians, delirious from medication. A flood of recovered memories surfaced. I’d forgotten he was my first teacher of poetry, testing me on stanzas, in lieu of lullabies, when I was three.

“I spit into the face of Time,” he’d said, reciting Yeats.

“That has transfigured me!” I’d quoted.

“Atta-girl. You’re so smart,” he’d told me, kissing my little forehead, despite himself sealing my fate.

At his funeral, I flashed to the night we attended  a cousin’s wedding, after I’d finished graduate school. We’d both snuck out to the back of the synagogue for a cigarette, our shared method of self-destruction.

“Why are you so against my writing career?” I’d mustered the courage to ask him.

Drunk on White Russians, he’d whispered, “You’re doing what I was afraid to.”

Susan Shapiro, a New School writing professor, is the bestselling author/co-author of 12 books, including Five Men Who Broke My Heart, Lighting Up, The Bosnia List with Kenan Trebincevic (out from Penguin Random House), and The Byline Bible (coming in August from Writer's Digest Books.) Follow her on Twitter at @susanshapironet and Instagram @profsue123.

13 Photographs of Famous Writers With Their Fathers 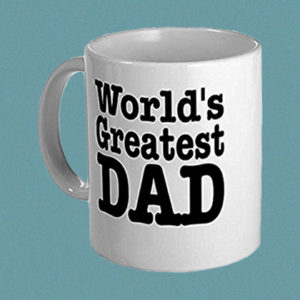 The problem with writing a book about one’s father is that he’s either going to read it, or choose not to, or else he has died...
© LitHub
Back to top