In Just One Book She Wrote a Life's Worth of Energy

A few times a month I guide a hike to the cottage of a 20th-century printmaker named Paul Landacre. The city landmark sits in my neighborhood, rotting, and it makes a wonderful screen on which to project the fantasy of a bohemian life that is both urban and bucolic, natural and gritty. Landacre lived with his wife in this little paradise for nearly 40 years, leaving quite a paper trail through his fine art engravings, his book illustrations, the recollections of his poet-friends. I have a nearly bottomless font of slides and anecdotes for guests, but invariably, they move into my blindspot: Landacre’s wife Margaret.

What few specifics I know come from the husband’s side: he was a difficult man and he relied on his wife for his career, that he killed himself shortly after she died of cancer. But I cannot answer how she felt about him. And I cannot answer whether Margaret, a copywriter before her marriage and a studio assistant after, had any artistic ambitions of her own. But that is what the guests want to know most, because she left no paper trail, because hers is a story implying potential.

The newly reissued autobiography of Mary Oppen is both an answer and not an answer to this yearning to know about the artistic life of an artist’s wife. During her career, Mary, who produced one chapbook of poems to her husband George’s seven full collections, was a dedicated Sunday painter who abhorred the contemporary art world. The paradox here is that even though her poetic output was so small, the work of the autobiography is all-encompassing enough to represent if not a life’s work, then a life’s worth of potential energy, burned fast and hot in one book.

Meaning a Life exists almost as an alternate version of 20th-century American canon, one in which works like On the Road and A Moveable Feast are written from the point of view of a woman, an activist, a mother in a committed relationship. About hitchhiking cross country, Mary writes: “We were out in search of an aesthetic in which to live.” The Oppens, both from the Western states, travel through France with a horse, Pom-Pon, and cart, searching for “something more than a life of ‘making a killing.’” They look at art: “here we were, two children of the new world come to find the meaning, the new light cast on time before us by the opening of the human spirit into art.” They publish a few books of fellow writers which do not sell; they produce little themselves, taking their time for reflection, discussion, discovery. The scenes and sentiments are familiar ones of 20th century bohemia, but the lack of ego and art making are not.

Mary sees herself as a more complete and unflappable being than muse or poet, wife or artist.

I think of Kate Zambreno’s Heroines, a litany exposing the horribly abused and pathologized wives of modernism. In Meaning a Life, it is refreshing to see an account of a husband and wife who live in harmony with their art, each other, their precursors. They befriend Pound and Elliot, but they keep their distance. Mary says again and again that they do not align themselves with schools of art. Mary is more to George than a “collaborating muse,” to borrow a phrase from “The Dolphin,” a poem in which Robert Lowell excuses himself to his wife, Elizabeth Hardwick for having “plotted too freely” with their lives. More importantly, Mary sees herself as a more complete and unflappable being than muse or poet, wife or artist.

Mary moves between scenes, years, and acute observations about familial love (and pain) with little ceremony, only speed and certainty. There are rarely breaks in the text or signals of the passage of time, and paragraphs connect with links that are whimsical. Lapping up the story, the descriptions one after another at a clipped pace, I wonder to myself about the style. On its surface it seems the plainspoken, clear recollection of a sage old woman. At the same time, it’s lack of artifice feels complex in its own right, like a whole different approach to forming an objectivist opus. The two don’t preclude each other. In his only known essay, George writes, “The distinction between a poem that shows confidence in itself and its materials, and on the other hand a performance, a speech by the poet, is the distinction between poetry and histrionics.” Mary certainly has confidence in her form and her materials. In both her writing and George’s the idea of poetry as “‘weighing of the truth” comes up often. And in a sense, the work at hand demonstrates a great act of patience: to wait for full perspective on the truth. From the vantage of her old age, she does not need to work memories for meaning; instead they are “waiting to be called forth” in a way that they could not have been summoned at a younger age.

In the few poems that are published in the back pages of Meaning a Life, Mary exhibits an imagistic fascination with birds. In “Mother and Daughter and the Sea,” Mary writes: “no sign of their path through the air / from ancient times birds know the paths of birds / twisting their necks cropping new growth / running  stretching their necks  flying  looking about / enticing their young to flight.” The path of the bird is not evident during flight, nor in retrospect. Like Mary’s life, the trajectory is known mostly by the work done and the influence on others, especially on the young. The life of a woman, Mary implies, is noble and generative with or without mapping of accomplishments, with or without a paper trail.

Part of what makes the dynamic of this artist couple so special is precisely that both partners took a long hiatus in their artistic lives: they made a mutual choice to pause art for activism, then the war came, a child, then an exile in Mexico due to their Communist Party ties. Though George in the end produced more poetry and became the canonical one, both of them did the bulk of their work after rich, full apprenticeships to life. It is why looking at their poetry and prose together is so rewarding. In George’s poem “From a Photograph,” he writes: “it is the child who is the branch / we fall from…” Here he has not only reversed the concept of the family tree, but he has realized his own trajectory, in something concrete. He rejects the child’s conception of him as “a loved and native rock,” discovering that his role must be social like Mary’s, not structural as patriarchal society might expect.

Mary may use many more words to process the life that she and George lived together, but in a way, it is George who needs many more things, more props. He uses images, she uses movement. The taboos of their time are hers to subvert—for instance, Mary discusses sex and abortion openly, but makes a point of staying silent on childbirth. The section of the book titled “Transition,” which covers four years and several stillbirths, spans fewer than four pages. She wonders about the past and the future of writing about this topic, situating herself as only one stop in the history of literature, trusting some future woman to narrate childbirth (and loss) with grace, to call forth what she won’t. She writes: “I have preserved the wholeness of my experience of birth by not telling it…” The way she uses a poetic attention to silence and omission is as radical as any of her husband’s objectivist work.

After years of hiatus from art during the time of “fast-crowding experiences,” Mary talks about the pressures of changing identity. She spent the war years, the exile years, chiefly as a wife and mother. She sees a therapist, but she elides her own visits and discussions with George’s—he has a dream about rust that he tells to the therapist. The therapist, comically on the nose, tells him that he is afraid of “getting rusty.” George gets started on his book The Material, and we are left knowing that Mary shares the same fear. In this latter part of the book, though we know she is busy with a return to writing and to art, we do not hear much about it. In one particularly telling section, though, Mary sings the praises of printmaking, an art form where she can “have the original picture one loved while working on it, and to be able to sell equally original copies.” It is an art form where one can be generous without being self-effacing.

I hope that Margaret Landacre felt that way too, when she was in the studio, helping her husband to run an edition on the printing press. I can only hope that she had some of Mary’s Western grit, and that it was her personal desire to value the conversation of art on par with the output of art. Louis Zukofsky, one peer and mentor of the Oppens, wrote about the objectivist movement, “Some of us are writing to say things simply so they will affect us new again.” Mary’s titling of this book is case in point. The simple removal of a preposition transforms a phrase from a cliche to a philosophy: meaning cannot be deliberately created within life, it can only be formed by the act of living it. No need to interrogate whether Mary’s was fulfilled; she lived her life in “testing the truth,” and felt no need to make herself the counterbalance of her findings.

Abby Walthausen lives in Los Angeles where she writes and teaches. 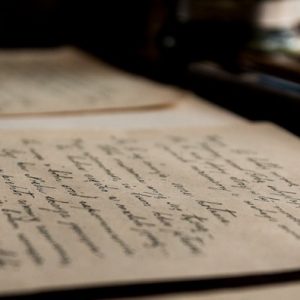 In the autumn of 2017 I received an email from an unknown correspondent: Dear Mr Murray, I hope you will forgive the intrusion,...
© LitHub
Back to top