In the autumn of 2017 I received an email from an unknown correspondent:

I hope you will forgive the intrusion, but I recently purchased a large quantity of wartime correspondence, via eBay, written by Eileen Alexander (soon to be Ellenbogen) in which I have found many references to your father, as Eileen worked with him in S9 at the Air Ministry during World War Two. I attach details of a weekend she spent with your family in Summer 1943. I have considered long and hard whether this is the right thing to do, and am basing my decision on the fact that if there were written details of my own family from over 70 years ago I would very much like to read them. Eileen held your father in the very highest regard and her letters are bejewelled with words like kind, intellectual, understanding, humanist regarding him. Although it is only just over 70 years ago—the idyllic weekend she describes seems to certainly belong to a lost era …

I have often blessed my parents for giving me a name (my grandfather’s) that is unique on the world wide web, but never more so than on receiving your email at the age of 80. Yes I still remember Corners vividly, our home from before my birth in 1937 to 1945, the doodlebugs, the air raid shelter, the 1945 election (when we were the HQ of the local Liberals), the garden and its wood. Your extracts are however the only written record I know of that period, and they are lovely. I do remember vaguely the name of Eileen Alexander, who sent Christmas cards every year, and I can locate most of the places and people she mentions.

It seems my father was still in the Air Ministry in 1943; but in that year he moved to be civil service head of SOE under General Gubbins, an experience he claimed had been expunged from his memory by concussion at the end of the war; but my first suitcase was one designed to hold a radio transmitter to be parachuted into France … Subsequently Patrick went on to the Ministry of Power, where he headed the electricity division, being responsible for the nationalisation of electricity and its denationalisation twenty years later, and for the creation of a nuclear power industry. He retired in 1965, and went to live in the south of France and Weybridge.

Thus began an unexpected friendship during which David and I researched his find. For thirteen years he had been the sole carer of his aged mother and confined to the house much of the time; to occupy himself he decided to buy letters on eBay and perhaps make a book out of them. By pure chance he bought a small bundle of letters from Eileen Alexander, and realized that these were truly remarkable; so he contacted the seller and offered to purchase the rest. A year passed, and he had given up hope, when finally the seller offered him the remaining letters for the original auction price.

Eileen Alexander graduated in 1939 with a brilliant first-class degree in English from Girton College, Cambridge; her subsequent accident in a car driven by her future husband, Gershon Ellenbogen, begins the correspondence and their love affair. There were approximately 1,400 of these letters, written almost daily, covering the years 1939 to 1947. David began transcribing them; he sent me a first volume and then three further ones, over sixteen hundred pages covering roughly half of the correspondence. I began to quail at the thought of a book as long as Proust, and suggested that he try to edit it down to a single volume with the idea of publication. Within ten days that volume arrived, covering the years of courtship up to Eileen’s reunion with Gershon and marriage. We christened it Love in the Blitz, and I introduced him to a family friend, the literary agent Felicity Bryan. She read it while confined with flu on her sick bed, and the next day phoned David and offered to be his agent. Together the three of us began to research the history of the correspondence.

These letters, surely some of the most beautiful and vivid love letters ever to be written during the Second World War, have survived through a series of chances.

The letters appear to have been first auctioned at Bridport Auction House in a bundle of miscellaneous papers shortly after Gershon’s death in 2003; presumably they had been part of his house clearance. The lot did not sell, and was taken away by an employee, who sorted the letters out from the rest of the papers and identified the writer, but found the task of transcription too difficult. A decade later, in January 2015, she put them back into the auction house as a separate lot:

The letters were bought for £250 by the dealer who subsequently began offering them on eBay until David’s intervention. Meanwhile David researched the family and friends of the couple, and Felicity tracked down Eileen’s grandchildren, who gave their assent for the letters to be published.

So these letters, surely some of the most beautiful and vivid love letters ever to be written during the Second World War, have survived through a series of chances, to be rescued from oblivion by David McGowan, their devoted transcriber and editor. We plunge into the correspondence and follow the young writer’s experiences day by day with little knowledge of what lies ahead, as she lives through the war years. Slowly we learn to know her idiosyncrasies, her growing love, her relations with her rather “odd”—as she describes them—family, her experience of the Blitz in London. We learn to trust her judgements on her circle of friends and acquaintances and we find them increasingly hilarious. Everything is seen through her eyes: even her beloved is only dimly reflected in her comments. We are amazed at her naivety and her ignorance of sex. We may admire her independent stance on Judaism and some of her progressive views on politics.

We begin, too, to appreciate that Eileen is involved in a new literary genre with a multiple purpose. The first is to enmesh her beloved in her life, to keep him engaged with herself and prevent him straying during their long separation—the sort of narrative letters that Ovid imagines Penelope writing to Ulysses. She wants to display all her talents, her knowledge, her first-class degree, her ability to find a quotation in Elizabethan literature for every eventuality. There is also much about her friends’ liaisons—perhaps in order to warn Gershon to keep faith with her.

The second is to create an intensely personal narrative, a type of Bildungsroman, so rich that it holds us as we follow the daily experience of a young woman setting out on life, with all its uncertainties, exploring her environment and learning from the mistakes of those around her.

The third is perhaps inadvertent; without knowing it, she is fashioning a feminist vision of war, a description of war as it is seen by women, not men—a time of absence and waiting, of hoping and doubting, of being caught between tradition and modernity, desire and faithfulness. That makes the narrative almost unique, the outside world impinges, disasters hit her, but she never acts, only reacts: and yet life goes on apparently normally. Elias Canetti’s famous description of contemporary London, Party in the Blitz, seems mean-spirited and randomly vicious beside Eileen’s instantaneous, daily, witty and loveable take on the undisturbed rhythms of Cambridge and London Jewish life in wartime Britain. 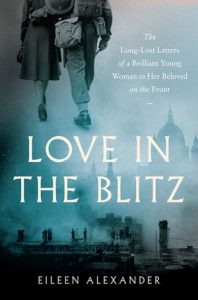 From Love in the Blitz by Eileen Alexander, with a foreword by Oswyn Murray. Used with the permission of Harper.

Oswyn Murray is an emeritus Fellow of Balliol College, Oxford, a Fellow of the Society of Antiquaries, and a foreign member of the Royal Danish Academy and the Scuola Normale Superiore di Pisa. He is author of Early Greece (1980, 1993), and an editor of The Greek City (1990), Sympotica (1990), In vino veritas (1995) and A Commentary on Herodotus Books I-IV (2007), and has written more than a hundred articles. He was history editor of the Oxford History of the Classical World (1986), and has been a regular contributor to the Times Literary Supplement on cultural and literary topics. 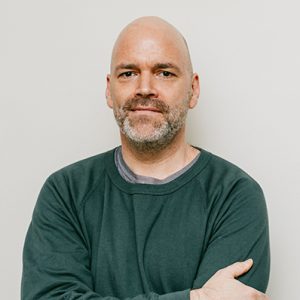 This week on The Maris Review, Patrick Hoffman joins Maris Kreizman to discuss his new book, Clean Hands, out next week from...
© LitHub
Back to top
Loading Comments...