Many of those influenced by Marshall McLuhan—including fellow Canadian David Cronenberg—did not share the media theorist’s religious views; most of them weren’t even aware that the media seer had deep faith. Yet McLuhan’s religious sense offered structure, symbolism, and perhaps even song for his media explorations. Those persuaded by his media theories are not automatically persuaded by the religious vision that underpins them—yet we might consider that their attraction to a thinker so steeped in God suggests a theological osmosis of sorts. God made his way into media theory through McLuhan, whether it was recognized or not.

Rather than fading into history like many of his provocative contemporaries, McLuhan has gained traction and credibility as the years have passed. It is fascinating to realize that McLuhan only becomes more of a prophet the further our world turns to the digital. As Paul Levinson notes, McLuhan’s metaphors were extravagant and malleable because they had to be: “In overshooting the mark, the metaphor gives the mark—and our understanding of it—room to move and grow. In contrast, definitive, fully documented descriptions of a technology, even if they are correct and thus useful in the present, may tell us little about the future.” Might McLuhan’s religious vision have captured some ineffable truths that both transcend the digital world and also help us comprehend it?

While McLuhan was at the end of his life, Kevin Kelly was a young photographer on freelance assignment in Jerusalem. He wandered the street at night and found himself at the Church of the Holy Sepulchre, built on the site where Jesus was crucified. Exhausted, and without a place to stay, Kelly laid down on the crucifixion spot and fell asleep. He woke when the crowd of visitors started to gather “as the sun was coming up that Easter morning, and I was staring at empty tombs.”

Raised Catholic, Kelly had since drifted from religious faith—until that morning. Fourteen years later, Kelly was the founding executive editor of Wired magazine—and Marshall McLuhan was on the masthead as the magazine’s patron saint. Kelly has said that his Easter conversion resulted in, as he puts it, “a logic, comfort, leverage that I have because of that view.” It’s a formulation that feels much like the structuring element of faith for McLuhan.

McLuhan’s appearance on the masthead might be a quirk or a wink of the technology magazine’s staff were it not for the faith of Kelly—and how that faith has influenced his vision of technology. Kelly has argued that “technology is actually a divine phenomenon that is a reflection of God.” Technology, for Kelly, offers us another way to try to understand the impossible: at our best, we might only apprehend God as metaphor; even with all the “artificial intellects we make,” we might only have “the slightest glimmer of who God is.”

God made his way into media theory through McLuhan, whether it was recognized or not.

Kelly had a clear supporter in the Catholic-raised Louis Rossetto, the cofounder of the magazine and the one who recruited Kelly to the editing position. Rossetto rejected the idea that Wired was a magazine about technology. As he wrote in a short manifesto within the first issue, the magazine “is about the most powerful people on the planet today—the Digital Generation. These are the people who not only foresaw how the merger of computers, telecommunications, and the media is transforming life at the cusp of the new millennium, they are making it happen.”

Wired debuted with volume 1, issue 1 in March/April 1993. On the cover, an unfocused close-up of Bruce Sterling is set against a teal background. McLuhan’s name appears on the cover, advertising a conversation between Camille Paglia and Stewart Brand. On the right side of the cover, “The Medium…” trails off to the edge, parallel with a neon-pink tab that, if you follow the page, leads to a spread that quotes McLuhan from The Medium Is the Message: “The medium, or process, of our time—electric technology—is reshaping and restructuring patterns of social interdependence and every aspect of our personal life. It is forcing us to reconsider and to re-evaluate practically every thought, every action, and every institution formerly taken for granted. Everything is changing you.” The lines languidly stretch across the pages, as if McLuhan were lounging in his office sofa at the Centre for Culture and Technology.

The Brand and Paglia conversation is anchored in McLuhan’s identity as a lost prophet. Paglia talks about how she was influenced by McLuhan. His books were assigned to her at Binghamton University in the mid-1960s. “What’s happened to him,” Paglia wonders. “Why are these people reading Lacan or Foucault who have no awareness at all of mass media? Why would anyone go on about the school of Saussure? In none of that French crap is there any reference to media. Our culture is a pop culture.”

Wired did its part to keep McLuhan relevant. Over the years, articles like “Honoring Wired’s Patron Saint,” “McLuhan Lives,” “Five Views of St. Marshall,” and “The Wisdom of Saint Marshall, the Holy Fool” reminded readers of their guiding visionary. In one essay, contributing editor Gary Wolf concludes, “It is comforting to think McLuhan is outdated, because it alleviates our shame at not living up to his demands. His pleas for understanding and his warnings of doom are like the quaint aphoristical exhortations and eschatological prophecies of the early church.”

Kevin Kelly has taken McLuhan’s pleas and warnings as a way to develop a “spiritual dimension to technology.” In Kelly’s extension of McLuhan’s vision, he sees the need for stewards of technology in the same way that we might see ourselves as stewards of the natural world. Kelly has argued that our nebulous, almost mystical way of talking about information sounds as if people were “talking about the Holy Spirit.” Technologists, Kelly observes, will place a nearly spiritual belief in information but hesitate to believe in God—more a reflection of their comfort with metaphors associated with information than any ontological truths.

Technology, Kelly believes, “can teach us about God.” Technology requires attempt and failure, construction and deconstruction. “The ongoing scientific process of moving our lives away from the rule of matter and toward abstractions and intangibles can only prepare us for a better understanding of the ultimate abstraction,” Kelly writes. “We tend to see God reflected in nature, but my bet is that technology is the better mirror of God.”

Kelly seems to describe a potential marriage of the spirit and technology that McLuhan doubted would happen but would be entirely consistent with his Christian vision. Kelly has helped McLuhan remain and evolve into our digital world. As others such as Joshua Meyrowitz have noted, “McLuhan’s writing is so dense and rich that it seems to cry out for participatory exegesis and for treatment as holy text.” McLuhan charged into the coming electronic world with fervor.

We might consider with Meyrowitz how McLuhan’s mosaics, probes, pronouncements, and even his mistakes have been “generative, rather than substantive, inspirational rather than instructional.” McLuhan offers us a way to reimagine the digital world through a spiritual vision of communication. The vision is not often easy, and it is not often delivered in a manner that we may like, but it is a radical and personal vision nonetheless. We would expect nothing less of a saint. 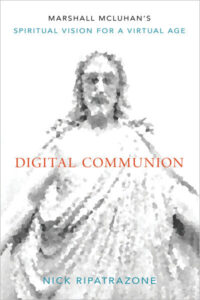 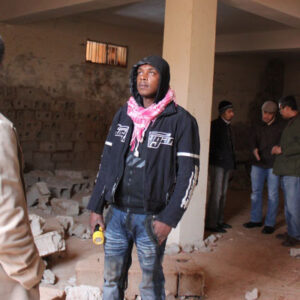