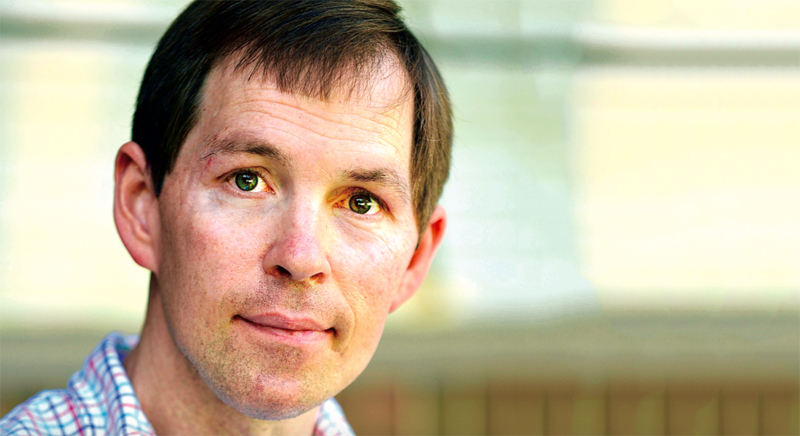 How Clay Byars Battled Paralysis to Finish His Memoir

The fact that 43-year-old Clay Byars is giving a phone interview is nothing short of a miracle, given that he nearly died not once, but twice—in a pair of events that he chronicles in the intensely powerful memoir Will & I. Not much has been easy since, he writes: “Actions as simple as brushing my teeth, shaving and showering all begin with the question ‘How am I going to do this?’”

Writing remained one of the few things he could still accomplish without struggle and quickly became “a healing obsession.” Telling his story, however, proved to be anything but easy.

“I figure that with all the different drafts,” Byars says, “I’ve probably been working on it for about 15 years. So it’s been a while.”

In 1992, during his sophomore year at the University of the South in Sewanee, Tennessee, Byars was riding in a car with friends when an oncoming car veered into their lane. Byars likely would have died at the scene had not a passing motorist removed a piece of broken jaw from his airway. Additional injuries included nerve damage to his right shoulder that left him unable to bend his elbow.

Meanwhile, his identical twin brother, Will, was hours away, back at home in Birmingham, studying for a test and unaware of the accident. Just before midnight, though, Will was suddenly awakened by a throbbing pain in his jaw.

“We’ve had incidents like that throughout our lives,” Byars says. “People used to ask us what it’s like to be a twin. My response was always, what’s it like to not be a twin? So I didn’t think much of Will’s jaw pain at the time of my wreck.”

Tragically, things went from bad to worse. About nine months later, a New Orleans neurosurgeon nicked Byars’ vertebral artery while attempting to repair the nerve damage, causing him to have a massive stroke. For several weeks, he experienced Locked-In Syndrome, leaving his brain unable to communicate with his body.

“It was a weird feeling,” Byars remembers, “and it’s sometimes hard to think about that now. The best way to describe it is having one dream inside of another and waking up, but not being fully awake yet from the first dream.”

Byars says the neurosurgeon continued to practice, eventually retiring. When Byars’ parents tried to sue, the surgeon was so respected that other doctors weren’t willing to testify against him. He never apologized, but Byars says, “I kind of understand why he didn’t. He didn’t want to make himself liable.”

The initial prognosis was dire, with the best-case scenario that he would remain paralyzed from his eyes down. Will recognized that his brother was “conscious and trapped,” which was unbearable to witness, so he said nothing and left. To others, Will’s reactions might have seemed abrupt, but Byars understood, writing, “Every stage of life we’d gone through not just together but as a unit, as a unity.”

Ever so slowly, Byars began to regain movement, first in his right leg and right thumb. While others rejoiced, hoping that Byars would recover fully, Will held no such illusions, and once again, quickly left his brother’s hospital room. “He didn’t know what to say, and I couldn’t speak,” Byars writes.

After months of physical and occupational therapy and workouts at a nearby gym and on his home elliptical, Byars never did fully recover, but today, he walks, drives and lives independently. His vocal cords were
left extremely weak, and he’s been taking singing lessons for a number of years, trying to strengthen his “head-injury voice.”

As he explains in his memoir: “I like being able to do things I’m not supposed to do. . .  According to my MRI, I should have been more or less a vegetable.”

The “Will” in Will & I refers not only to his twin brother, but to Byars’ own incredible will, something that he understood anew while still in the hospital, in what he describes as a “liberating ash of vision.” Both of these “wills,” it turns out, have remained essential to his survival.

Undeterred by his vocal problems, Byars is an engaging communicator. In addition to our phone conversation, he answers follow-up questions by email and shares a letter he wrote to Will about his hospital vision, which he later understood to have been the Zen experience of satori, or enlightened consciousness. “It wasn’t a near-death experience,” he wrote. “On the contrary; it was the greatest affirmation of life I’ve ever felt.”

Byars eventually finished college, and he now writes short stories and serves as an assistant editor for Narrative magazine. Will ended up marrying Byars’ high school girlfriend, and Byars eats dinner with the couple and their three daughters each week. “In many ways, our relationship hasn’t changed since the wreck,” Byars explains in his book. “We are no longer physically equal, but we are more open with each other than we used to be.”

When asked if he ever feels jealous of Will, Byars responds, “Sometimes I’m envious of the ease with which he can do things that take me hours, if I can do them at all, but on the whole, no.”

Byars’ first attempt to write his story took the form of fiction, but he deemed the storytelling ineffective and too linear. He kept at it, though, eventually attending the Sewanee School of Letters to work with writer John Jeremiah Sullivan, who suggested that he weave his voice lessons into the tale and who also helped him pare down his manuscript. “We went over it line by line, working for about three months,” Byars remembers.

The result is compact, substantial and thoroughly compelling—reminiscent of neurosurgeon Paul Kalanithi’s posthumous bestseller, When Breath Becomes Air. While Kalanithi addressed the prospect of his impending death from cancer, Byars tackles the question of facing an immensely compromised life.

When I suggest that Byars read Kalanithi’s book, he does, later emailing to tell me how much he admires it, and adding, “I wish he’d been my neurosurgeon.”

Alice Cary is a writer and frequent contributor to BookPage. She lives in Groton, Massachusetts and is a mother of three. 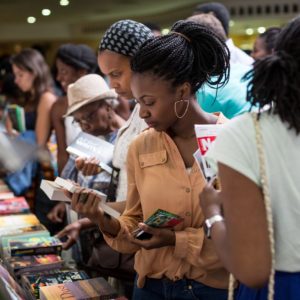 Today marks the start of the fifth annual Africa Writes Festival, in London. We asked organizer Sheila Ruiz, who originally...
© LitHub
Back to top