Jacob Soll on Piety and Profits in the Middle Ages

In many ways, the story of medieval economic thought begins with the life of the founder of the Franciscan Order, Saint Francis of Assisi. He was born Giovanni di Pietro di Bernardone in 1181 in Umbria, Italy, his father a silk merchant and his mother a noblewoman from Provence. The family was part of a new class of wealthy merchants who inhabited the Latin Mediterranean from Italy and southern France to Barcelona. It was a socioeconomic stratum that Francis would reject.

In 1205, he had a mystical vision that led him to forsake earthly wealth. He renounced his inheritance and, in a stunning display of his dedication to total poverty in the name of Christ, stripped his clothes off in public, driving his horrified father to disown him. From then on, he wore only coarse peasant garb, walking and dwelling among the poor as a mendicant monk and living only from donations.

The first true ecologist in the European tradition, he saw animals as spiritual beings and preached to them. He believed that his church had no walls and was nature itself, and spurned the very essence of wealthy monastic life. His followers, the Franciscans, and their vow of total poverty posed a real threat to the religious institution that had become the center of wealth throughout Western Europe.

The renunciation of riches brought with it a profound philosophical examination not only of what wealth was, but of how prices were created both morally and through market forces.

The renunciation of riches brought with it a profound philosophical examination not only of what wealth was, but of how prices were created both morally and through market forces. Franciscan Scholastic theologians—trained to use dialectic and deductive reasoning to resolve philosophical questions—centered at the University of Paris, drew upon Plato, Aristotle, and Cicero to understand how markets could function according to Christian morality.

They mixed an Aristotelian interest in balance with a reliance on Roman natural law as described in Gratian’s Decretals (1140), the great legal textbook of the Middle Ages. The founding medieval compendium and textbook of Roman Church law, The Decretals declared that every unfair loss—a deal that was not deemed of equal value for both parties, or a fraud—had to be “restituted” with something exactly symmetrical in its worth.

This idea came from Aristotle’s Nicomachean Ethics and the principle of giving “equal for equal.” The Decretals also described how exchange was based on private property, contracts, and consent. This was the basis of just price theory, by which no price should reflect anything more than the fair balance of the trade, and those involved in the trade should profit equally.

The challenge for Scholastic thinkers was to establish what was the fair and moral price for a product or service, and how to calculate the equal values. Public authorities and producers set prices. Churchmen believed that to determine fair value, traders could make moral commercial decisions by using a logic of neutral individual choice. This did not really mean individual autonomy in the modern sense, only that merchants could make professional decisions about prices. They simply had to mix moral considerations with the market values of the time to create prices and profit margins that were just and fair, according to Christian thinking.

In his Summa Theologica (1265–1274), the Dominican friar and Italian Scholastic thinker Saint Thomas Aquinas agreed with the Franciscans that merchants had to be moral and use “just” prices. Yet Aquinas did not agree with Francis’s vow of absolute poverty. He argued that poverty should not be a requirement or rule, but a personal choice or aspiration. Indeed, he believed that total poverty was not possible, because man always owned things, and felt the Franciscans risked mortal sin and damnation, for breaking a vow one has made to God was a serious matter.

It was perhaps a convenient piece of argument, for the Dominican order was wealthy, with huge feudal landholdings, and Aquinas did not have any qualms about what he considered morally acquired wealth: he felt that the Church needed to be rich. This belief influenced his sense of the natural workings of the market.

Honest business and profits, Aquinas said, were not a sin. In a contract, prices could be clearly agreed upon to the advantage of both parties. If one party in a sale or exchange tried to have an unfair advantage over the other, the public authorities (secular or religious) would have to intervene and seek restitution. Aquinas cited Cicero when he argued that it was the duty of all traders to declare in advance any defect in their product. Aquinas followed Cicero’s belief that good morals formed the basis of commerce and politics. In this highly restricted moral way, one could be pious and earn a profit.

The challenge facing Franciscans was enormous. If they accidentally owned wealth or used it beyond their bare necessities—for example, if they owned any piece of clothing that was beyond what was necessary for utilitarian purposes—they would be damned for breaking their sacred vow. The Franciscan Order began to study pricing and valuation mechanisms to be sure their members remained in “total poverty.” The rules of the order denied its members the right to live in monasteries, which were too rich. Nor could they own any sort of property. They were not even supposed to touch money. Friars could help the poor, the sick, and the pious, laboring faithfully and devoutly, but they could never work directly for money.

The strictness of Francis’s own Rule caused consternation among members of the Church. It seemed impossible to have a monastic order without a hierarchy, property, and funds for housing, sustenance, and charitable works. Aquinas believed that the Franciscans were too radical and would lead to a rejection of all institutional and social hierarchy, as well as private property. The Church was the greatest feudal property owner of the time and collected taxes across Europe. The vow of poverty threatened the temporal Church and its vast wealth. Peasants and even kings chafed at this great power, thus it had to be forcefully preserved. Even more, figures such as Aquinas worried that the Franciscan vow implied that members of the Church who did not live in poverty—or lived in great luxury—were impious sinners.

They simply had to mix moral considerations with the market values of the time to create prices and profit margins that were just and fair, according to Christian thinking.

Franciscan poverty posed a real threat to the Church. While most Franciscans preached peace, other groups of radical mendicant friars, such as the Northern Italian Dolcinian sect of the early 1300s, periodically led powerful and violent movements to overthrow the social order and destroy the Church as an institution of private property. The Church sent armies against them, and in 1307, the leader of the movement, Fra Dulcino, was captured and burned at the stake.

The Scottish Franciscan monk and Scholastic philosopher John Duns Scotus took a more nuanced view of pricing than Aquinas, proposing that prices came neither from balanced exchange nor from moral rules. Rather, he believed they came from a freely working secular market process. Private property was not the purview of the Church, which was ill equipped to understand all the market activities that went into creating value.

As Duns Scotus saw it, prices came from quantity and from the value of labor and expertise. To understand a price, one had to take into account “diligence, prudence, care, as well as the risk one accepts in doing such business.” Therefore, it was very difficult for churchmen to calculate market prices. And because this was the case, it was equally difficult for Franciscans to be sure that they were truly obeying their vow of poverty. To keep their vows, they needed to consult with merchants and those expert in secular market prices.

As it happened, Franciscans often came from well-educated, commercial backgrounds, which meant that some had a particular awareness of the workings of commerce and pricing. Franciscan leaders and sympathizers came to believe that the way to manage the vow of poverty was to more carefully codify it. The Franciscan theologian Saint Bonaventure’s Constitutions of Narbonne (1260) was a detailed analysis of wealth and poverty meant to create strict rules to hold Franciscans to their vows.

One of the most important topics was clothing, a prominent sign of wealth in Italy, where cloth production was at the center of its flourishing economy. Saint Francis himself considered clothing a material impediment to poverty and a sign of riches. The rules of the Constitutions thus decreed that each brother own only one tunic, even going so far as to specify what a friar should do if a tunic fell apart, for instance, or if one had to use pieces of other cloth to repair it.

In 1286, the Franciscan Order began to examine how books—vellum manuscripts, which were very expensive—could be viewed not as valuables, but purely as tools of learning. The Franciscans calculated that an expensive book, if it was used for strictly utilitarian spiritual purposes, was not an object of wealth within the strict economy of the order. Thus, a layman could give books as gifts to individual monks or monasteries, but the institutional leader or custodian would have to decide who could actually use them.

In 1297, one Brother Bartholomeus of Bologna received two books from another friar. He then bequeathed them to a certain Brother Hugolinus. To be sure, they were following rules of spiritual utility. Friars were careful to record such goods and describe exactly how they used them so that the order could calculate the value of the goods in worldly and spiritual terms. 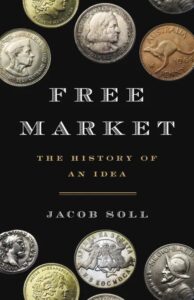 Excerpted from Free Market: The History of an Idea by Jacob Soll. Copyright © 2022. Available from Basic Books, an imprint of Hachette Book Group.

Jacob Soll is University Professor and a professor of philosophy, history, and accounting at the University of Southern California. The author of The Reckoning and The Information Master, Soll is the recipient of many prestigious awards, including the MacArthur “Genius” grant. He lives in Los Angeles. 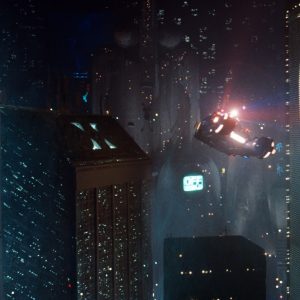 Jaron Lanier, an apostate futurist, once remarked to me on Keen On that he missed the future. Lanier meant that he was nostalgic...
© LitHub
Back to top
Loading Comments...