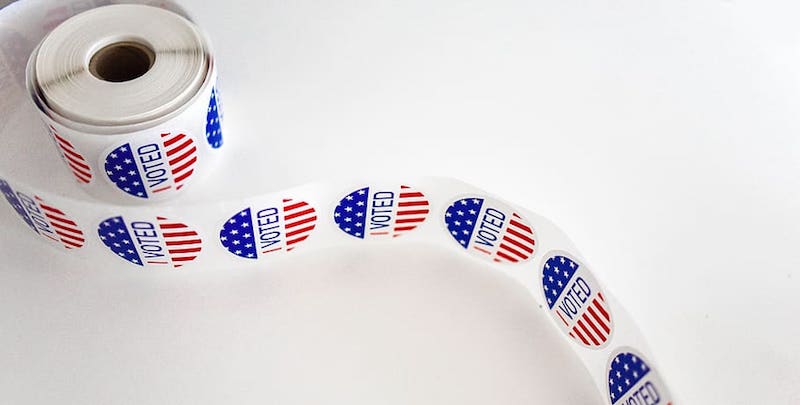 Gilda Daniels on the Roots of Voter Deception

Jefferson Riley, a metro Atlanta mayor, posted on his personal Facebook account, “Remember the voting days: Republicans vote on Tuesday, 11/8 and Democrats vote on Wednesday 11/9.” At Michigan State University, students found fliers “falsely claiming that students could vote for Democratic presidential candidate Hillary Clinton by posting ‘Hillary’ on Facebook and Twitter and hashtagging it ‘#PresidentialElection.’” After winning the presidential election, Donald J. Trump announced to Republican lawmakers that millions of “illegals” cast ballots in the 2016 election, causing him to lose the popular vote. These three statements are examples of the level of deception present in our democratic process. These kinds of statements are regularly ignored or minimized to the degree that many election officials consider it harmless banter. However, it is not. Indeed, these words and others like them cause voters to second-guess participating in the electoral process and ensure a loss of confidence in the very system that serves as the foundation of our republic.

This is voter deception, and it is worsening and placing our governmental system in jeopardy. The level of deception in the election process has evolved in a few short years, such that it now occurs at our nation’s highest level. Moreover, we now find ourselves ensnared in targeted misinformation that causes voters to remove themselves from the electoral process.

Merriam-Webster dictionary defines deception as “the act of causing someone to accept as true or valid what is false or invalid; something that deceives.” Voter deception involves the distribution of false information regarding the time, place, and manner of elections as well as voter eligibility. Voter deception has accelerated in the age of the internet. The connection between deception and voting, however, has existed for centuries.

Today, we are faced with the enormous task of ensuring not only that the public exercises the appropriate level of civility and accuracy in the election process but also that public officials do. Traditionally, it has been what I call public deception that has manifested itself in false calls or fliers making false claims of noncitizens voting or threatening prosecution for unpaid child-support payments or traffic tickets. However, we now see political deception, that is, elected officials filling the atmosphere with untruths with a blatant disregard for the truth.

Whether it is a flier that encourages Democrats (blacks) to vote on Wednesday when the actual election is held on Tuesday or a president who espouses the false notion that millions of persons voted illegally, it is all deception and has its roots in the worst type of political gamesmanship, which causes fear in those who should trust the electoral process. My mother used to say that a lie outruns the truth, meaning that it is harder to track down the source of a lie or to provide a correction to a lie. Moreover, a lie spreads so quickly that it is utterly impossible for the truth to stand. Notwithstanding the difficulty, the need remains and is even more pronounced to identify instances of verifiable voter deception and to chase down the lies in the hope that the truth may, in fact, overtake it.

From emancipation to the election of the first African American president, the right to vote has been challenged, and deceivers continue to use misinformation and threats to control the electorate. In post-Reconstruction, former slaves were targeted, and Jim Crow laws were introduced and required voters to demonstrate extraordinary endurance to cast a ballot. Voter intimidation, which has a similar purpose as voter deception, became a primary tool in denying the franchise, serving as a surrogate for poll taxes, grandfather clauses, and literacy tests.

Fear of retaliation, incarceration, violence, and the end of life can all serve as viable and real impediments to the voting process.

In the post-Reconstruction era, violence was the tool of choice to ensure that newly enfranchised voters would fear participating in the political process. A lesser-known event that framed the ability of the new citizens to participate in the democratic process occurred on Easter Sunday in 1873 in Colfax, Louisiana. This small city became the symbol for white supremacy and aggression. Colfax, like other small enclaves in the South after the passage of the Civil War Amendments, had more people of color than whites. The Union troops were in place in certain places throughout the South to protect newly freed persons from white terrorist organizations like the White Leagues and the Ku Klux Klan. With regard to Colfax,

The election of 1872 produced rival claimants for the governorship, a situation paralleled in localities throughout the state. In Grant Parish, freedmen who feared Democrats would seize the government cordoned off the county seat of Colfax and began drilling and digging trenches under the command of black veterans and militia officers. They held the tiny town for three weeks; on Easter Sunday, whites armed with rifles and a small cannon overpowered the defenders, and an indiscriminant slaughter followed, including the massacre of some fifty blacks who laid down their arms under a white flag of surrender. Two whites also died. The Colfax Massacre was the bloodiest single instance of racial carnage in the Reconstruction era.

The number of victims of the massacre varies from two to three whites and 60 to 150 African Americans. The author Charles Lane has described the Colfax Massacre as “the day that freedom died.” He provides a thorough investigation into the many injustices that occurred before, during, and after the massacre. He writes that in August 1874, Louisiana Governor William Pitt Kellogg believed that the subsequent acquittals of the violent perpetrators “establish[ed] the principle that hereafter no white man could be punished for killing a negro.” At that time, there were only 130 United States troops in Louisiana. Kellogg warned that unless the army came back soon, his government could fall. “‘If Louisiana goes,’ Kellogg wrote, ‘Mississippi will inevitably follow and that end attained, all the results of the war so far as the colored people are concerned will be neutralized, all the reconstruction acts of Congress will be of no more value than so much waste paper and the colored people, though free in name, will practically be remitted back to servitude.’” Unfortunately, Governor Kellogg was right.

A marker on the grounds of the former Colfax Courthouse reads,

On this site occurred the Colfax Riot in which three white men and 150 negroes were slain. This event on April 13, 1873, marked the end of carpet bag misrule in the South.

Colfax, Louisiana, is located less than fifty miles from the Oakland Plantation where my maternal great-great-grandparents were enslaved, freed, and remained. The proximity of this atrocity was not limited to Grant Parish, where Colfax is located. White vigilante groups wreaked havoc on Republican elected officials and sympathizers. “After a siege by white vigilantes, the Republican government of Natchitoches Parish, which is next door to Grant Parish, resigned en masse on July 27. Five Negroes were lynched that same day in the town of Lafayette.”

Similarly, in 1898, in Wilmington, North Carolina, a multiracial, democratically elected government was overthrown. “White supremacists carefully planned the overthrow of a popularly elected government, banished prominent blacks and whites from the city, and killed scores of black citizens. At the state level, the Democrats broke up the interracial Populist-Republican alliance with an aggressive campaign of white supremacy and violent deployment of ‘Red Shirts’ that kept blacks away from the polls.” The “Red Shirts” and other terrorist organizations wielded a violent brand of white supremacy that took over the North Carolina state government and denied newly freed people the right to vote. The multiracial coalition that had formed after Reconstruction was dismantled, and the tyranny of terror reigned for almost a century in North Carolina and throughout the Southern states.

Not surprisingly, extremely violent events like those of Wilmington, North Carolina, Rosewood, Florida, and Oklahoma City, Oklahoma, along with the decades-long practice of lynching, convinced many, if not most, southern blacks to accept their banishment from the political sphere. Because of the strong force of white-supremacy politics, the interracial cooperation of late-nineteenth-century Wilmington, North Carolina, would not be seen again in the South for at least six decades.

An explosion of violence accompanied the campaign for Mississippi’s 1875 election, in which Red Shirts and Democratic rifle clubs, operating in the open and without disguise, threatened or shot enough Republicans to decide the election for the Democrats. Republican Governor Adelbert Ames asked President Ulysses S. Grant for federal troops to fight back; Grant initially refused, saying public opinion was “tired out” of the perpetual troubles in the South. Ames fled the state as the Democrats took over Mississippi. Moreover, the objects of the Klan were to banish the so-called carpetbaggers from the state, to restore the freed people to positions of servanthood under their former masters, and to regain control of the state government. The band of vigilantes carried weapons of war and used them to torture those who were known or believed to vote against white domination.

Near the site of the Colfax Massacre, my great-great-grandparents continued to toil on land where their parents were slaves. I can imagine that news of the terrorist acts that occurred in Colfax and in other areas in Louisiana and throughout the South led them to engage in self-preservation and to do as my grandmother mentioned—not attempt to vote—for fear that they could lose their lives. As they had only recently gained freedom, navigating the treacherous road to the right to vote was overwhelming, when living as a free person had just begun and with the authentic reality that your life could end if you cast a ballot. I can imagine that the terror that was allowed to reign in the state of Louisiana and throughout the South weighed heavily on them and other newly freed persons. The slight taste of freedom that they had and the resistance to change that they witnessed forced them to make a choice. Having escaped the horrors of slavery and only experiencing liberty for a short period of time, they would have been led by the white retaliation and violent measures to make decisions to determine how to live or to resist the tyranny and terror and participate in the political process. It was clear that the Colfax Massacre’s message was that blacks would not be allowed to vote for reconstructive measures or Republicans. The threats of bodily harm intimidated black voters to the extent that my grandmother recalls that for the first half of the twentieth century, most blacks did not vote.

These horrid acts of intimidation thus caused voters to question and fear whether casting a ballot was worth losing one’s life. The impact of the massacre, the threats of violence, and widespread lynchings sent explicit messages that it was not. These acts of violence persuaded voters of color that the right to vote, while contained in the Fifteenth Amendment, was not meant for the African Americans in the unjust Jim Crow era. Accordingly, the nexus between intimidation and the right to vote is related to deception. These kissing cousins have offspring that has as its mission to keep people of color from exercising the full levels of freedom provided in the United States Constitution. Fear of retaliation, incarceration, violence, and the end of life can all serve as viable and real impediments to the voting process—so much so that the lack of protection makes the act of voting unattainable. 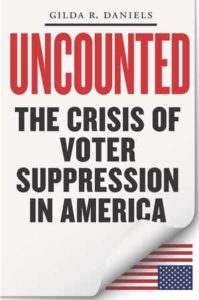 Gilda R. Daniels is an Associate Professor at the University of Baltimore School of Law.