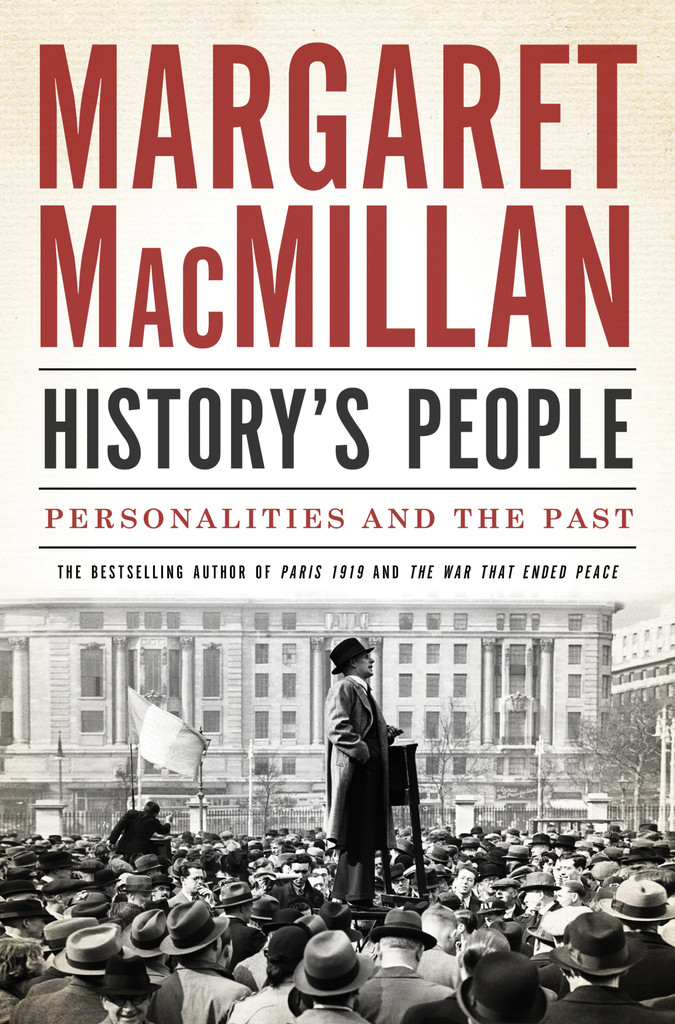 The following is from Margaret MacMillan’s book History's People. MacMillan is the author of The War that Ended Peace, Nixon and China, and Paris 1919: Six Months That Changed the World, which won the Governor General’s Literary Award and the Samuel Johnson Prize. She is the warden of St. Antony’s College and a professor of international history at Oxford University, as well as a professor of history at the University of Toronto.

On September 1 the Second World War started in Europe with Germany’s unprovoked attack on Poland. Britain and France, which had guaranteed Poland, in turn declared war on Germany. Two days later FDR took to the radio for a Fireside Chat. “I have said not once,” he told the American people, “but many times, that I have seen war and that I hate war. I say that again and again. I hope the United States will keep out of this war. I believe that it will. And I give you assurance and reassurance that every effort of your Government will be directed toward that end.” There was little in what he said to encourage the Allies except for one passage near the end: “This nation will remain a neutral nation, but I cannot ask that every American remain neutral in thought as well. Even a neutral has a right to take account of facts. Even a neutral cannot be asked to close his mind or his conscience.”

In fact he moved quickly a few weeks later to introduce what he cunningly called the Peace Bill; in it he proposed the repeal of the arms embargo on belligerents and the extension of “cash and carry.” For the first time in his administration, he and his supporters went all out on a foreign policy issue. It helped that public opinion was shifting still faster to the Allies; one poll showed 84 percent of Americans were in favour of an Allied victory. FDR worked from behind the scenes to persuade representatives and senators and, where necessary,buy them off with offices for their friends or economic inducements which would benefit their districts.

His office encouraged the public to make its feelings known. The veteran muckraking journalist William Allen White ran a highly successful public campaign which added to the pressure. The bill passed with a comfortable majority. But there was to be little comfort in the months to come.

In May 1940, as the German invasion swept through France with appalling rapidity, FDR broadcast another Fireside Chat. He called attention to the horrors being suffered by civilians in France and Belgium and asked the American people to donate to the Red Cross. He also laid out a challenge to the dwindling number of committed isolationists: “To those who have closed their eyes for any of these many reasons, to those who would not admit the possibility of the approaching storm — to all of them the past two weeks have meant the shattering of many illusions. They have lost the illusion that we are remote and isolated and, therefore, secure against the dangers from which no other land is free.”

He went to Congress for a further $10.5 billion to arm the United States, and he agreed to run for an unprecedented third term. He also moved decisively to arrange for more war equipment to be sold to Britain. It was not at all clear, however, in those first anxious months, that Britain, even under the vigorous new leadership of Winston Churchill, would continue to fight on — or be able to. By August Churchill had made it clear to the British people and the world that there would be no surrender. Moreover the German air force appeared to be losing in its attempt to destroy Britain’s air defences. FDR pushed the limits of his powers. He allowed secret military talks between the Americans and the British, and, using executive authority, he signed off on a deal which gave the British American destroyers in return for long leases on British bases in the Americas. (He persuaded the navy to declare perfectly good destroyers obsolete so that there would not be a political outcry.) He also took steps to protect the Western hemisphere, meeting King near the border with Canada to sign a defence agreement. A further agreement, signed at Roosevelt’s country estate of Hyde Park the following year, served to integrate Canadian and American war production.

In the election campaign, FDR undercut the Republicans by promising the voters that “Your boys are not going to be sent into any foreign wars.” He deliberately left out the phrase “except in case of foreign attack,” which was in the Democrat platform. When a speechwriter asked him what he intended, FDR replied, “Of course we fight if we’re attacked.” The election safely behind him, he moved to extend American aid to Britain. The British were running short of funds, and “cash and carry” was no longer an option. In a press conference in December 1940, he asserted that helping Britain defend itself was the best way of defending the United States. What was the point, he asked, of keeping war materials in storage at home when they could be put to good use across the Atlantic?

And now was not the time to worry about how the British would pay; eventually they would pay up or make good what they had been lent. He suspected that pretty much everyone at the press conference agreed with him: now was not the time to worry about money. Let’s, he said, “get rid of the silly, foolish old dollar sign.” And, as he did with such skill, he used a homespun analogy: “Suppose my neighbor’s home catches fire, and I have a length of garden hose four or five hundred feet away. If he can take my garden hose and connect it up with his hydrant, I may help him to put out his fire. Now, what do I do? I don’t say to him before that operation, ‘Neighbor, my garden hose cost me $15; you have to pay me $15 for it.’ What is the transaction that goes on? I don’t want $15 — I want my garden hose back after the fire is over.”

In a Fireside Chat a couple of weeks later, he fleshed out his ideas. He started by talking about security for Americans, their children, and their grandchildren. He warned of the danger that was creeping ever closer to them. Their very way of life was threatened by the Nazis and their allies. If Britain fell, the United States could not count on the Atlantic Ocean to be a secure barrier to that threat. The new long-range bombers had made sure of that: “The width of those oceans is not what it was in the days of clipper ships.” The Azores, which might well fall to Germany, were closer to the continental United States than Hawaii was. The United States must look to its own defences, but it must also do more for Britain: “We must be the great arsenal of democracy.”

The legislation he laid before Congress had another clever title: “An Act to Promote the Defense of the United States.” The debate was a difficult and passionate one, but FDR prevailed and the bill passed by big majorities in March 1941. It gave the president sweeping powers to give, lend, or sell war material to any nation whose defence was vital to the United States. That spring, FDR also gradually expanded the area deemed necessary to defend the Western hemisphere, including the Azores, most of Greenland, and Iceland, moving the Western hemisphere’s defensive perimeter well out into the Atlantic. In June, when Germany invaded the Soviet Union, the United States moved still closer in support of Britain. FDR gave the go-ahead to the U.S. Navy to start discussions with the British about Atlantic convoys for the crucial supplies to Britain.

In August, off the coast of Newfoundland, FDR and Churchill met for the first time since 1918 and agreed, largely at FDR’s insistence, on a common set of principles — the Atlantic Charter, as it came to be known. The following month, a German submarine fired on the Greer, an American destroyer, off Iceland. FDR used the incident in a Fireside Chat to announce that the United States’ forces would not only defend themselves in the part of the Atlantic that the States deemed its defensive perimeter, but they would also protect all merchant ships there. Although he did not say so specifically, this was the start of shared responsibility for convoys with the British and the Canadians. Nor did he did not mention that the Greer, along with British aircraft, had been trailing the U-boat and had attacked first. As FDR cheerfully said of himself the following year, “I may be entirely inconsistent, and furthermore I am perfectly willing to mislead and tell untruths if it will help win the war.”

On December 7, 1941, the time for such subterfuge ended with the surprise attack by Japan on the American Pacific base at Pearl Harbor, which brought the American people united into the war. A few days later, Hitler removed any lingering doubts about whether the Americans should fight in the European conflict by declaring war on the United States, a nation he despised as having a “mongrel” population. Thanks in large part to FDR, the United States was already prepared both psychologically and materially for the great struggle it now faced. Americans were clearer than they had been five years previously about what was at stake.

In the years to come, FDR was to rise to the challenge of providing strong and inspiring leadership for his country, and he was to do much to shape the postwar world. It is hard to imagine that his Republican opponents in the presidential elections of 1936 and 1940, Alf Landon and Wendell Willkie, could have done the same. And if you want to consider an even more worrying alternative, read the Philip Roth novel The Plot Against America, in which Charles Lindbergh, anti-Semite and pro-German, becomes president in 1940. FDR came to office at a dark time for the United States—how dark, we now sometimes forget. Even sober commentators talked of the possibility of widespread and violent civil unrest, even civil war. The Depression had thrown one in four Americans out of work, and there were voices, often powerful ones, to argue that capitalism and democracy no longer worked, that new forms of economic or political organization were needed. The world of the time provided all too many examples of societies collapsing and new authoritarian regimes emerging.

Without FDR the United States might have gone down other paths. And without him the Second World War would have taken a different shape. Our world, the one shaped by the post-1945 institutions which FDR played such a crucial role in setting up, would be quite another one too.

From HISTORY’S PEOPLE. Used with permission of Anansi. Copyright © 2015 by Margaret MacMillan. 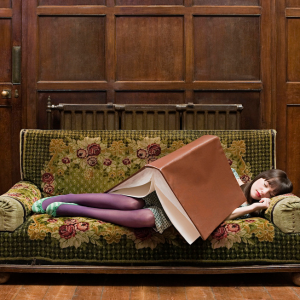 Really, Really Big Books: A Reading List This month’s most buzzed-about book is City on Fire by Garth Risk Hallberg, and with good cause: The novel, a mystery set in gritty...
© LitHub
Back to top