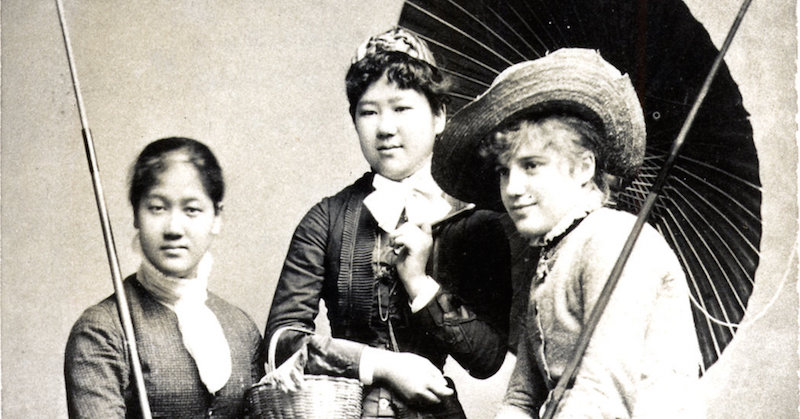 Janice P. Nimura On Meeting the Descendants of Her Subjects

The problem with writing life stories is that it’s hard to know where to stop. Lives are sprawling landscapes, and a book is like a map: it has edges imposed by its maker. Roads and rivers run straight off the page; mountain ranges keep rising outside of the frame. A biography may be bounded by birth and death, but the life it tells is entwined with endless others. Its fabric, no matter how carefully woven, drags a train of trailing threads.

Last year I published a book about three young women of 19th-century Japan, daughters of samurai families who spent a decade of childhood in America: an unexpectedly successful experiment in cross-cultural immersion. I hoped the story would find an audience among Japanophiles and armchair travelers, history buffs and anyone else intrigued by the thought of sending a group of little girls (the youngest a bewildered six-year-old) halfway around the planet in hopes that they could aid in the modernization of their homeland. I had felt resonances with my own life in this world-straddling story; perhaps others would too.

Three months after the book came out, I received an email from a reader in California. It’s thrilling to discover that a stranger has read your words and felt moved to write a few back, but this message raised the hair on the back of my neck. The writer introduced herself as the great-great-granddaughter of Elida Vineyard DeLong, an ambassador’s wife who had a cameo in the story.

Recruited to chaperone the girls on their unimaginable journey from Tokyo to Washington, Mrs. DeLong had seemed—as far as I could tell from the scanty sources—an unsympathetic type, basking in the reflected glow of her exotic assignment. There she was, seated among her kimono-clad charges in a Harper’s Weekly engraving, wearing an expression that could only be described as smug. She was in no hurry to help the girls acquire the western-style dresses that might afford them some relief from gawking bystanders. “Mrs. DeLong strutted alongside them like a proud hen with unusually colorful chicks,” I had written.

Had I thrown shade on this woman’s great-great-grandmother? I braced for a scolding. But: “Thanks for the pleasure of this book,” wrote Mrs. DeLong’s descendant. “The accomplishments and determination of these women contrast sadly with your (accurate, from what I know) depiction of my great-great-grandmother.” I exhaled. With a few quick strokes, my correspondent brought her ancestress to life: unhappy with her husband’s posting to Japan, defrauded of her inheritance, widowed early and, “neither resourceful nor bold,” left to raise several children in genteel poverty. Suddenly I could see terrain beyond what I had mapped myself.

Over time there were more glimpses. A venerable math professor wrote from Berkeley: did I know that his great-aunt Anna Hartshorne had taught for half her life at Tsuda College, the Tokyo women’s college eventually founded by that same bewildered six-year-old, Ume Tsuda? I had spent hours wondering about Anna, Ume’s elegant longtime companion, who shared her home as well as her life’s work. Come to dinner when you’re in town, Professor Hartshorne wrote, and soon I found myself eating salmon and asparagus in a hill-perched home with a Japanese-style bath in the back, its garage converted into a tatami-matted teahouse. The professor and his wife had even studied the shakuhachi, a Japanese flute, with a musician friend of mine. Connections in the present as well as the past.

Artifacts emerged from near and far. My friend Jun thought his great-grandmother, a Japanese baroness, had taken English instruction from Ume Tsuda; sure enough, a packet of letters arrived, including one written by his great-grandmother in English in 1909, with painstaking corrections by Ume in red ink. A Kentucky woman wrote to tell me of a find she had made while antiquing in Indiana: a tattered autograph book full of fading signatures, including pages signed by two of my Japanese girls—Ume Tsuda and Shige Nagai—during the summer of 1878. “I sat with your book in my lap and the autograph album on the sofa beside me,” the woman wrote, “reading about Ume and Shige at the same time I could touch the pages they had touched.”

It was as if the frame I had imposed on this history had sprouted, tendrils spiraling off in the direction of other lives and landscapes, other books both written and yet to be conceived. I had thought of my project as if it were a diorama: a landscape in a box, painstakingly rendered but finite. It had been difficult enough to decide where those limits were, to stop poking in archives for one more forgotten document, one more glittering detail that might illuminate the whole. Now the cardboard walls were dissolving, and it was both exhilarating and unnerving. Had I drawn the right conclusions, painted portraits that others would recognize? Had I missed something?

Ask my friends and they’ll tell you: writing forgotten stories from the past suits me. I like wandering in libraries. I like to be alone. I like to be in charge. I’m organized and diligent, I like to do things thoroughly. I like to talk, too—sharing this story with audiences large and small has been as much fun as writing it.

But once the book was out in the world, it began to pull me out of my comfort zone. I like things tidy, and those tendrils of connection tangled and snagged, hooking me into conversations with strangers, dragging minor characters onto center stage, changing not just the trailing edges of the story but its very fabric.

I always like the moment in my talks when I show a photo of the Vassar class of 1882, a gaggle of young bluestockings with one Japanese face in the middle: Sutematsu Yamakawa, the eldest of my three subjects, elected class president in her sophomore year! There’s always a gratifying murmur from the audience as I drive the point home: that’s how talented she was, how intellectually dazzling, how extraordinary in transcending her otherness. But one afternoon my audience was a room full of Bryn Mawr students, and one of them raised her hand. Wasn’t it possible, she asked, that Sutematsu’s classmates had elevated her because of her differences, rather than in spite of them? Didn’t they think of her as a sort of samurai princess, and wouldn’t they have found it gratifying to show her off?

I had never thought of it that way, and it made perfect sense. I felt the kind of lurching sensation I remembered from earthquakes in Tokyo, a loosening of up and down, right and left. I knew this material so well, or thought I did—what other elegantly simple explanations had I overlooked? What else had I gotten wrong?

I peered through this new lens all the way home, tremors of doubt replaced by a growing certainty. She was right. And I was right. And there were other rights, an infinity of rights. Every person who encountered Sutematsu Yamakawa while she lived, and every person who had stumbled across her story since, saw a slightly different woman, colored by context and perspective and the passage of time. I had told her story the way I saw it, and the young woman across the table at Bryn Mawr had added something new.

The point was that both of us had looked closely at a distant moment—Vassar College, circa 1880—and imagined it, vividly, leaving the sleek glass walls of a modern be-Smartboarded seminar room behind. How did it feel to be that Japanese Vassar girl, or one of her corseted classmates? And by extension to be a young woman in America or Japan in the turbulent closing decades of the 19th century? Three people—the student, me, and a samurai daughter a century dead—had shared a giddy moment of connection.

When I was a student I hated history. We discussed primary texts; we memorized names and dates; we sorted information into political, economic, and social piles; we related our topic sentences back to our thesis statements and drew tentative conclusions about sweeping themes I felt underqualified to judge. We received grades, and then we forgot most of it. In the fall of senior year the college counselor asked us to write her a letter outlining our goals for the future. I wrote, “The only thing I know I’ll never be is an historian.”

History is made of stories about people, and empathy is a better time machine than a five-paragraph essay. My tenth-grader recently read the Federalist Papers for her U.S. History class; she was underwhelmed, and I had flashbacks to my own struggle with high-school history. A few weeks later, having fallen hard for the cast album of Lin-Manuel Miranda’s Hamilton, I read Ron Chernow’s sparkling biography—and with the explosive energy and emotion of Miranda’s poetry echoing behind Chernow’s lively, intelligent prose, the story of America’s founding took on an urgency and drama I had never felt. It was fascinating to see where the two writers converged and diverged, but what emerged was an indelible impression of passion and effort and frustration and triumph: the elements of what it means to be human in any era. They had imagined the same moment, intensely but in wildly different ways, and peering through both of their lenses at once was like nothing I had ever experienced.

I set out to tell a good story, and then other stories came and found me, and other storytellers added their voices too, and I wish I could go back in time and tell my tenth-grade self how breathtaking and scary and gratifying and essential it is to give voice to history. Now I’m getting ready to tell a new story, and this time I know: there will be better and worse ways to do it, but not right and wrong. My job will be to dive deeply, feel keenly, write honestly—and listen closely to the voices that respond. History is made of stories, and first page and last are arbitrary markers. What lies between remains unbounded. 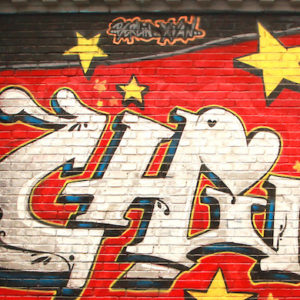