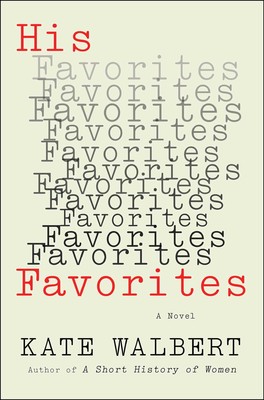 The following is from Kate Walbert's novel, His Favorites. After getting in an accident that kills one of her best friends, a teenager named Jo flees her hometown and enrolls in a boarding school, where she struggles to reckon with the past. Kate Walbert has been a finalist for the Los Angeles Times Book Prize and the National Book Award. Her work has appeared in The New Yorker, The Paris Review, The Best American Short Stories, and The O. Henry Prize stories.

This is not a story I’ve told before. No one would believe me. I mean, really believe me. They would get that look and nod. They would ask certain questions that suggested I was somehow culpable or that I was making most of it up out of nothing—just girlish fantasies and daydreams. Hysteria. They would wonder how my actions might have precipitated everything or encouraged everything, especially given why I was at Hawthorne at all. I had a reputation for drama then. I also had an appetite for alcohol and marijuana, as did my parents, although we would have gotten along just fine in our individual clouds of stupor, my parents in the living room and me in my bedroom, until the night I stole and wrecked a golf cart, stoned, with my friends Carly and Stephanie.

Carly and Stephanie were my best friends, Carly a girl from an Italian family who owned mushroom barns in Farmingdale, the stench particularly strong the last weeks of summer, when they opened the doors for some kind of airing out. Carly said her family made a great living in shit, the mushrooms grown and harvested in horse manure, but she could not stand to be anywhere near that smell in late August and so decamped to my house, where we slumped around in my bedroom or on the roof just outside my bedroom window, smoking joints if we had them or listening to the radio or sitting with open tin-foiled record albums beneath our chins, the sun’s rays singeing our faces red.

Stephanie lived in the neighborhood, a development on the other side of town from the mushroom barns called Huntington Acres, though the houses were on quarter acres. Ever since middle school, she and I had walked home together from the school bus, watching television in somebody’s living room or doing homework, heating frozen pretzels in the oven. Huntington Acres bordered the Huntington Country Club golf course; we had belonged since we moved in—something about ownership and membership—so if it was warm enough, Stephanie and I sat by the club swimming pool or used our roll of red tickets to order a frozen Milky Way or French fries from the snack bar.

On that day, Carly and Stephanie and I baked on our roof for most of the afternoon so that our faces were a little tanned, mostly burned—a look we loved and wanted to show off. We spent some time lip-synching in front of my bedroom mirror, my hairbrushes our microphones, Elton John’s Goodbye Yellow Brick Road full blast, played repeatedly, especially “All the Young Girls Love Alice,” which we

didn’t quite understand, or at least I didn’t, but it seemed portent and relevant and about things so far from where I was that the line itself was like a bridge out.

I sang it again and again—“tender young Alice, they say.” Stephanie had stolen something from her parents’ liquor cabinet, vodka or gin, that we mixed with orange juice; someone thinking close to dark that we should dress up and head over to the club, that maybe there were some caddies still around, some of the older boys we knew from high school we would see walking behind the men lugging bags of clubs on their shoulders. Or maybe we should sneak into the garage and take a cart, I said.

“I had a reputation for drama then. I also had an appetite for alcohol and marijuana, as did my parents, although we would have gotten along just fine in our individual clouds of stupor”

For years I had humored my mother on the golf course, learning how to play and sometimes accompanying her and her friends for nine holes, eighteen too boring but nine passable if she would let me drive the cart. I liked to zoom up to my mother’s lie or mine, slamming on the brakes at the last minute, skidding just a little so she believed I would crush her Titleist four or five, the great drive she’d made from the ladies’ tee, the next shot she could almost taste. This would make her laugh. My mother was a woman who liked to laugh. Suffice it to say I knew my way around the front nine of the Huntington course blindfolded, and also that on Friday nights the keys to the carts were left underneath the cart mats, Saturday mornings exclusively for the men who began to play before the fog burned off the shorn fairways, the grass still wet. You would see them in clusters of threes

and fours, shadowy, inky, and hear the whoosh and thwack of their graphite drivers as they hit the ball off the men’s tee, graphite drivers all the rage. For months I had been saving to buy one for my father, picturing him unwrapping the new club on Christmas morning every time I slipped Saturday babysitting money into the wallet I kept in my top drawer, Mother agreeing to add to the fund as long as I paid the bulk.

Graphite drivers, she told me, don’t grow on trees. I knew about graphite drivers like I knew about golf carts, like I knew that the keys to the carts were left under the mats for all the men early Saturday mornings. For most of my life, I waked Saturdays to the electric sound of those carts zipping past as the men followed their shots. We were just off the third tee, far enough back that it would take a mulligan to land in our backyard but close enough that it happened from time to time—the rustle of a ball through our huge magnolia, Mother saying oh shit from the back patio, where in good weather she sat reading a novel, her coffee in a thick mug, her pack of cigarettes on the wrought-iron table. Mother an early riser too.

Oh shit, she said, calling me quick to look for the poor man’s ball before he considered it lost and zoomed off. One thing my mother hated was a lost ball.

Stephanie was reluctant with this plan, her parents members of the Huntington Club but not members in the way of mine—her parents served on the kinds of committees that considered the long-term health of the various species of trees that grew in what we called the “copse”—the particularly tricky rough bordering the seventh fairway. They diligently explained to the bored other members during monthly meetings the need to increase the dues given the appalling situation regarding the crumbling mortar of the old stone wall that ran the length of Old Stone Wall Road, a situation Mother reported back to me, laughing that Marilyn Farmer then asked with her typical Marilyn Farmer seriousness—wouldn’t that make the old stone wall look like a new stone wall? To which Stephanie’s father, known as the Colonel, cleared his throat and explained how the stonemasons were known for their ability to replicate the antiquarian ways of the original Italian citizens who arrived from distant shores to Farmingdale to work in the gunpowder mills we could still see dotting the banks of our river, the name of which everyone had difficulty pronouncing and so pronounced in varying ways, ironic, since the word was a Native American word that meant crooked tongue.

“He went on,” Mother said. “Endless.” Stephanie’s mother we called Barbara the Nurse; she worked in the nurse’s office at Farmingdale Elementary and never failed to have licorice or lollipops or Snoopy Band-Aids on hand. That I had over the last year convinced Stephanie to steal their liquor, or to occasionally get high, I considered a personal triumph—as an only child my skills at persuasion honed to such precision that even at fifteen more than one adult advised me to go into law.

But Stephanie was in a mood; she had fought with Barbara the Nurse that afternoon, something about makeup or a forgotten chore—they were those kinds of parents—and given Stephanie’s not-quite-right younger brother, Buddy, she had to be the one to do everything perfectly, not just for the Colonel and Barbara the Nurse but for womankind in general. Her mother the kind of woman who tacked up posters of Eleanor Roosevelt and other feel-good early feminists in the Farmingdale Elementary nurse’s office; whenever you found yourself there with a fever or a stomachache she would launch into some lecture on female accomplishments, as if feeling lousy at school was a failure of character and she had been hired, in a nursing capacity, to buck you up.

So that day Stephanie arrived at our house pissed, a bottle of gin in her knapsack and a look in her eye. That she had begun to so resemble her mother felt a little unnerving, especially when she pulled out the bottle and smiled.

“Sky rockets in flight,” she sang. “Afternoon delight!” And this is how we got to lip-synching an old Elton John record in my room and the sting of too much time in the sun and somebody’s grand idea we should go to the club and check out the caddies, or maybe, and this was me, I know this was me, steal a cart and take a ride, given how the keys were right there for the taking and we were two members out of three.

“My parents wouldn’t join if you paid them,” Carly said, leaning in toward the mirror to apply her eyeliner in what she called an Egyptian scroll before plastering on the blue eye shadow we had found the weekend before in the 99¢ bin at the head shop in the mall. She looked like an exotic bird, or this is how I remember it, and how later that same eyeliner striped her face in black rivulets as if she were behind bars, the blue eye shadow smeared into bruises.

From His Favorites. Used with permission of Scribner. Copyright © 2018 by Kate Walbert.

Vijay Iyer: A Moral Imperative to Speak for the Musical Margins 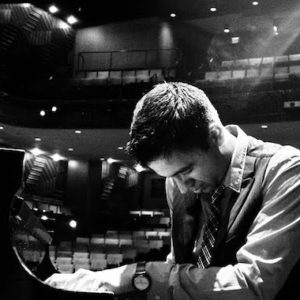 Vijay Iyer: A Moral Imperative to Speak for the Musical Margins The concert began in a state of rippling composure: Vijay Iyer at a Steinway, his tolling chords and arpeggios carried aloft...
© LitHub
Back to top