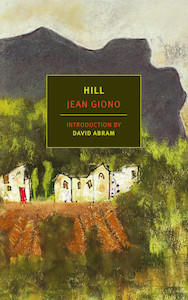 The following is from Jean Giono’s novel, Hill. After the success of Hill, which won the Prix Brentano, he left the bank and began to publish prolifically. During World War II Giono’s outspoken pacifism led some to accuse him unjustly of collaboration with the Nazis; after France’s liberation in 1944, he was imprisoned and held without charges. Despite being blacklisted after his release, Giono continued writing and was elected to the Académie Goncourt in 1954.

Janet is stretched out under the sheets, stiff and straight. His slender body lifts the grey blanket into a furrow-mound. Bird’s-breath flutters across his chest. You might even say that it looks like a seed wanting to break through its casing and unfurl its leaves into the sunlight. This is what Gondran imagines as he munches his onion.

Janet has a forbidding air this evening: skin blue as granite, hardened nose bones, nostrils translucent like flints. Out of the shadow, his one open eye glints with the glimmer of stone, like one of those outcrops hidden deep in the ground that a big, polished ploughshare, one that usually runs true, will buckle up against and flip over.

“What if this lasts all summer and all winter, like it did with papa Burle?”

You’d think Janet was moving his fingers. Now what’s he up to?

With difficulty, he’s uncovered his hands. He’s spread them out on the sheet. He looks at them with his one open eye, which, little by little, widens in a stupor. His right hand moves slowly towards his left hand.

His right hand seizes his left, squeezes it, stretches it out. It looks as if it’s trying to pull off a glove or some kind of binding. Next, slowly, ponderously, as though inflated with appalling force, but still having to strain to lift an enormous weight, the hand advances towards the edge of the bed and makes a throwing motion. And then it begins again, always the same, like a machine.

Gondran moves nearer. From here, closer up, he can see the veins quivering in Janet’s hand. They’re like the ropes they use to tie up baby goats.

“Papa Janet, what are you doing?”

Janet is as stiff as a wooden saint. He draws his marble pupil into the corner of his eye.

He chuckles, like a pine nut crackles when you crush it.

“I’m on the lookout for them. When a head sticks out from under one of my nails I grab it, I yank on it, the whole stinking vermin comes out, and then I toss it on the ground. Meanwhile, another one comes up through my finger. I pull it out and I toss it down too. It’s a tiresome job, but when my hands are clear of them I won’t feel so rotten any more.”

Gondran, flabbergasted, looks at Janet, then at the bedside rug. Nothing there—just red and blue flowers.

The action begins again, slow, methodical. Janet wants to prove it. His clenched fist stretches out from the side of the bed, opens up…. His pupil gleams victoriously from the corner of his eye.

Gondran has seen nothing. And now he’s a bit more sure of himself.

The shutter leaps; the ivy beats against the windowpane. The moaning descends from the attic, plunges into the thick air of the room below, cleaves through the odour of onions, cold ashes, and sweat, and vanishes under the vibrating door.

Janet is talking to the shadows, to no one in particular, and couldn’t care less about Gondran, who’s watching him intently and drinking up his weird words.

“So you think you see everything, do you, with your pathetic eyes? Can you see the wind too, you with your tremendous powers?

“When you come right down to it, you’re incapable of looking at a tree and seeing anything but a tree.

“People like you believe trees are dropped straight into the ground, with their leaves and all, and that’s the end of it, right there. Oh boy, if only it were so, it would be so easy.

“You don’t see anything there, under the chair?

“Do you really believe it’s empty, the air?

“Come on now, you really believe the air’s completely empty?

“Well then, look—there’s a house over there, a tree, and a hill, and you really think everything around them is just empty? You believe the house is a house and nothing more? The hill just a hill and nothing more than that?

“I didn’t know you were such a useless bugger.

“There, under the chair, just a second ago, I tossed three of them. One was a teeny green one, a grass snake. He looked like he had three braided oat stalks on his back. I have no idea why, but when he flipped out of my finger, he called out ‘Hey Auguste!’ My name isn’t Auguste. My name’s Janet.

“There was another one, thick, and short, the kind we call an ass’s prick, and another one that was whistling music that sounded like it was coming from a mouth organ. That one was a female. The skin on her belly was swollen. She’s going to have babies. She had a hard time, that one, squeezing out of my finger.

“Look, look quick now, there’s one climbing up the side of the cauldron to get at the milk. Big bubbles of milk are sliding down its gullet.

“So then, do you still think the air’s empty?

“If you had them inside your fingers, like I have, you’d know.

“If you’d ever come face to face all at once, one evening, with what’s in the air down at the bend in the road, you’d see them like I do.

“The hill. You’ll notice it one day from the hill.

“For the time being our hill’s lying down like an ox in the grass, and only its back is showing. Ants are crawling all over its bristles, running back and forth.

“For the moment it’s lying down, but if it ever gets up, then you’ll tell me whether I’m raving or not….

“Look, look at that one! A real beauty with eyes like apples. Oh, but that one, he has eyes like a man. He’s tearing at my flesh. Ayay, ay me!

“And then there’s that one, the one over there on the floor. It’s twisting itself up tighter than a worm that’s cut in two. Look at it there pretending to be dying, the sly devil….”

Gondran looks right and left: the tiles are bare.

But Janet’s still making out that the bedside rug is moving. Under the table, there’s one of them! Under the table—a snake as thick as your thumb, sleeping, curled into the shape of an S.

Outside, the weight of the wind is crushing the oak. Dead branches crash into the watering trough. The chimney begins to roar, and ashes swirl around the fireplace like the dust stirred up by a flock of sheep.

From HILL. Used with permission of NYRB Classics. Copyright © 2016 by Jean Giono. 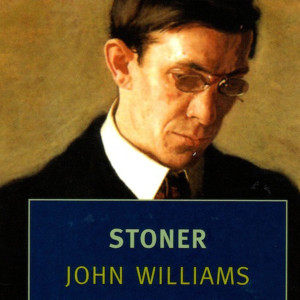 How the NYRB Chooses Its Reissues: The Story of Stoner This interview first appeared in Chinese in Tencent Weibo. Yongxi Wu: Stoner is a book published 50 years ago. When it first...
© LitHub
Back to top