On the Final Years of an American Legend-to-Be

When Herman Melville died, on September 28th, 1891, 125 years ago, he was still fiddling around with a small, sweet poem called “The Chipmunk:”

Stock-still I stand,
And him I see
Prying, peeping
From Beech-tree;
Crickling, crackling
Gleefully!

Having failed commercially as a novelist, he had spent the last 25 years of his life out of the public eye, and he had written poetry nearly every day. Mostly, his verse was tortured and cramped, and he often drew his themes from unlikely sources: ancient Greece and Rome, the Holy Land, myths, gods, and temple architecture. The scholar and Melville biographer Andrew Delbanco calls his poetry “gnomic,” and it contains none of the startling flights of fancy that make his best prose so engaging; but at the very end of his life, he turned his attention to homelier subjects, and his verse loosened up a bit and became more whimsical.

Through an orchard I follow
Two children in glee.
From an apple-tree’s hollow
They startle the bee.

Melville was 72 when he died in Manhattan, after a series of increasingly debilitating colds and viruses. He was interred in Woodlawn Cemetery, in the Bronx, where he joined his older son Malcolm, who had shot himself just after the Civil War, and his younger son Stanwix, who had died of tuberculosis in 1886. Woodlawn had been established during the Civil War and was built on the site of an important Revolutionary War fortification constructed by George Washington’s men, and the connection to both his sons and the struggles that had shaped his country would have appealed to Melville. Woodlawn was also the place where the most prestigious writers and businessmen were buried at the time, a fact that would not have been lost on the Melville family, though Melville himself died essentially anonymous.

If people remembered him at all in 1891, they knew his first two books, Typee and Omoo, loosely autobiographical adventures set in the South Seas. A New York Times obituary mentioned Moby-Dick in passing (“the story of a whaling voyage”) but mainly lamented the neglect of Melville’s earlier works. The formerly famous sea romancer, the article said, died “absolutely forgotten.”

Melville had spent little more than four years on sea journeys in the 1840s. He then spent the next ten years spinning those youthful escapades into novels, but after his first two successes, his writing career served mainly to bankrupt him. When he stopped publishing novels in 1857, it wasn’t because he had run out of ideas—it was because no publisher could afford to print his books, which always lost money. He tried giving lectures, which were popular and potentially lucrative entertainments in mid-19th century America, but reviewers dismissed him as an indifferent speaker, and he disliked crowds.

He started writing poetry instead. In the mid-1800s in America, collections of poetry had a chance to provide their authors and publishers real income, and poets such as Henry Wadsworth Longfellow, William Cullen Bryant, and Melville’s friend Oliver Wendell Holmes were not only household names but also earned more money from their poetry than Melville ever made from his novels. Harper & Brothers, who had published most of Melville’s prose, took a chance on Battle Pieces and Aspects of the War (1866), a collection of Civil War poems, but it was yet another commercial failure: unlike the popular poetry of the day, Melville’s verse was too dense, high-minded, and self-conscious to win a fireside reading by a family hearth. Out of money and resources, Melville was forced to sell his home in Massachusetts and move to Manhattan, and he took a job as a customs inspector for the City of New York—the most sustained work of his life, which he did for the next 19 years—but he never gave up writing.

Six days a week, he walked west from his apartment at 104 East 26th Street, across lower Manhattan, to the docks along the North River (as the Hudson was then known). His job was to check ships’ cargoes against their bills of lading and write reports, for which he earned four dollars a day (a salary that never changed). He walked back home in the evening, an unwavering routine. After dinner, he wrote poems late into the night.

Soft as the morning
When South winds blow,
Sweet as peach-orchards
When blossoms are seen,
Pure as a fresco
Of roses and snow,
Or an opal serene.

He retired from customs work at the end of 1885. For the remaining years of his life, Melville haunted bookshops with the pocket money his wife Lizzie gave him as an allowance. A young bookseller’s apprentice, Oscar Wegelin, reports meeting him in the shop of John Anderson on Nassau Street, in the Financial District, on an autumn day in 1890: he was “an old gentleman preceded by a beard that was impressive even for those hirsute days,” and he came looking for books about the sea. He was working on the novella Billy Budd, Sailor, his first fiction in more than 30 years, a narrative that he wrote in a plainer style than his earlier prose and which he never quite finished—it remained in a tin box with some other keepsakes for decades, until it was finally published in 1924 (and became his first international hit). And he continued to write poetry during this time, right till the end of his life.

When he died, leaving behind Lizzie and his two daughters, Bessie and Fannie, he had several dozen unpublished poems loosely collected on his desk, with a dedication at the front that he had written to his long-suffering wife of 44 years. Many of these poems had an easy style and a wry glint of humor that was often missing from his other verse. His subjects at the end included roses and irises, bluebirds and chipmunks, his early life with Lizzie in the Berkshires, and children’s dreams. Lizzie eventually published them in a private edition under the title Weeds and Wildings, with a Rose or Two.

Happy, believe, this Christmas eve,
Are Willie and Rob and Nellie and May—
Happy in hope! in hope to receive
These stockings well-stuffed from Santa Claus’ sleigh.

Occasionally, toward the end, friends would drop by Melville’s apartment, or a literary adventurer would seek out the now-obscure sea romancer, and Melville would receive them. Mainly, he seems to have been content to avoid socializing, preferring instead to read his books, write, and tend his rose bushes.

“To produce a mighty book, you must choose a mighty theme,” Melville wrote in Moby-Dick, but he offers no advice about what to do after you’ve done that and then been forgotten. The anonymous writer of his New York Times obituary, though, noted that his exceptionally accomplished writing and subsequent popular oblivion conveyed “a moral that is both bitter and wholesome to the popular novelists of our own day.”

Was Melville disappointed by his commercial failure? Undoubtedly. But he kept writing, and we might imagine that he found some peace at the end, with his wife of more than 40 years, his daughters, a tiny garden, and a (bitter)sweet verse or two:

Ah, Love, when life closes,
Dying the death of the just,
May we vie with Hearth-Roses,
Smelling sweet in our dust.

Novelist Mark Beauregard is the author of THE WHALE: A Love Story (Viking), a novel about Herman Melville’s relationship with Nathaniel Hawthorne and its pivotal role in the writing of Moby-Dick. Formerly a journalist, magazine editor, and, most recently, manager of nonprofit arts and community organizations, he has lived in many places throughout the United States and in Europe and currently resides in Tucson, Arizona. 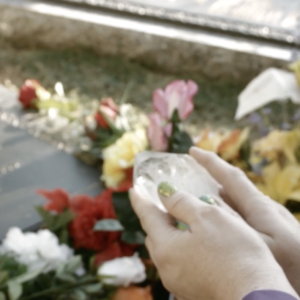 Recently, I had the privilege of seeing "The Book of Conrad," a new feature documentary about the life and poetry of visionary...
© LitHub
Back to top