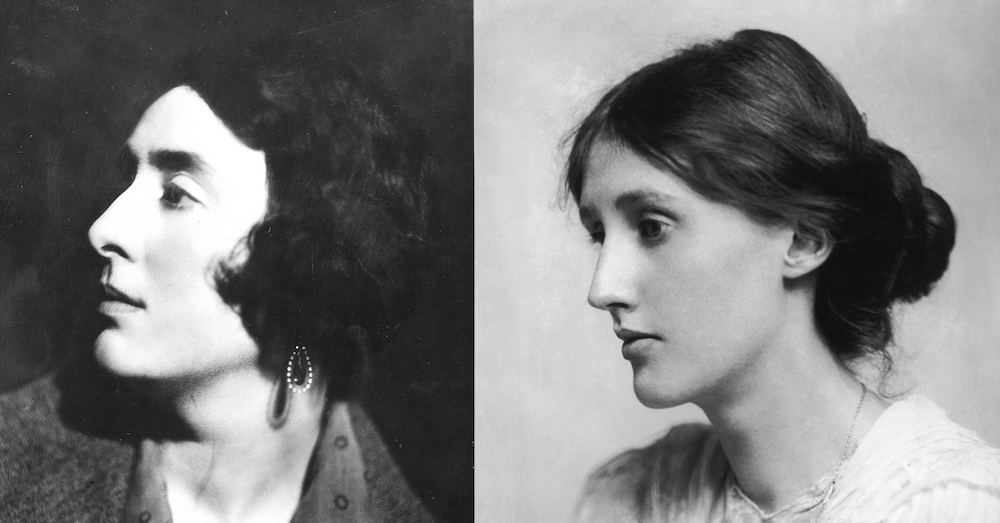 There’s no one way to survive a pandemic (and survival is the bar here, people—those of you thriving can take it somewhere else). Aside from the real and ever-present threat of death, COVID-19 has forced us all into various kinds of isolation, and we continue to grapple with either too much solitude or not enough. Though the news right now is good—cases are dropping, vaccination rates are climbing, and spring is around the corner—I know that for many this all feels like the darkness before dawn.

But sometimes, even as we reckon with the enormity of what has come to pass, the littlest thing can enter our lives and spark a glimmer of hope: for me, it’s been the random and near-daily encounters with the Vita & Virginia Bot, a Twitter account that generates hourly fragments of the correspondence between Vita Sackville-West (who was born on this day in 1892) and Virginia Woolf.

For those of you not up to speed on the hot literary gossip of 1920s and 30s London, Sackville-West and Woolf were lovers. Though (relatively) happily married, the two writers maintained an intense emotional and physical connection from the time they met in December 1922 until Virginia’s death in 1941. They were in love.

Though not separated by anything so dramatic as a pandemic, the circumstances of their lives—and the conventions of the society within which they lived—imposed an ongoing and unbridgeable gulf between the two. Vita and Virginia did their best to close that distance with letters: hundreds upon hundreds of letters filled with whimsy and gossip and delight and so much longing. As writers they lived much of their affair projected on the page; and remember: this was the era when you could send a postcard in the morning and receive one in return from your correspondent by tea.

In perhaps one of the ultimate examples of love sublimated into writing (like, ever?) Vita was the central inspiration for Virginia’s 1928 novel Orlando, which cemented the latter’s literary reputation and remains a classic of 20th-century literature.

Speaking of high modernism, let’s get back to the specific algorithmic genius of the Vita & Virginia Bot, which is described by its creator @TreeGeeKay, as “an epistolary bot that tweets excerpts from the letters of Vita Sackville-West and Virginia Woolf.” This means that every hour, 24 hours a day and seven days a week (forever?), a two- to three-line fragment of the long-dead lovers’ letters is broadcast out into the Twittersphere to the account’s 28,400 followers. (If you like the feed you can buy its creator a coffee here.)

The tweets can be vulnerable and needy:

11 March, 1927
Please wish that I might be there. Please miss me. You say you do. It makes me infinitely happy to think that you should, though I can’t think why you should, with the exciting life you have…
Your Vita

3 December, 1928
I wish it was Thursday. Yes, what a pity you cannot work magic on time in real life as you can in books. Then we could make Thursday last for 300 years.
Your Orlando

7 September, 1930
Yes, dearest creature, that will be great fun, if you will come on Tuesday, and don’t let it be very late after lunch.
Your Virginia

Obliquely philosophical and no doubt in reference to real-life conversations:

19 February, 1927
Darling… the queerness of human beings strikes me more and more forcibly here…
Your Vita

5 February, 1927
Dearest Honey,
No letter since you were careering through the snow in Westphalia… I hope this doesn’t mean you have been eaten by brigands, wrecked, torn to pieces. It makes me rather dismal.
Virginia

21 November, 1926
I think you are a witch, or a dowser in psychology. You must be. My respect for you increases.
Vita

1 November, 1933
You knew I should get wind of it– yes and it was a woman you were lunching with, and there was I, sitting alone, and and and…
Your Virginia

30 August, 1931
Well, you old wretch, what a skin flint you are with your letters.
Virginia

Below, though, is the kind of Tweet that has come through my timeline again and again, and which I’ve taken… not quite comfort from, but rather a kind of solace. Like millions of people around the world, I’ve been separated from the person I love for much, much longer than I ever thought possible. For me, each day is a tricky balancing of the comfort I take in that love with the heartache I feel in its lived absence. The Vita & Virginia Bot makes me feel less alone in that struggle.

30 August, 1940
What can one say– except that I love you and I’ve got to live through this strange quiet evening thinking of you sitting there alone.
Your loving
Virginia