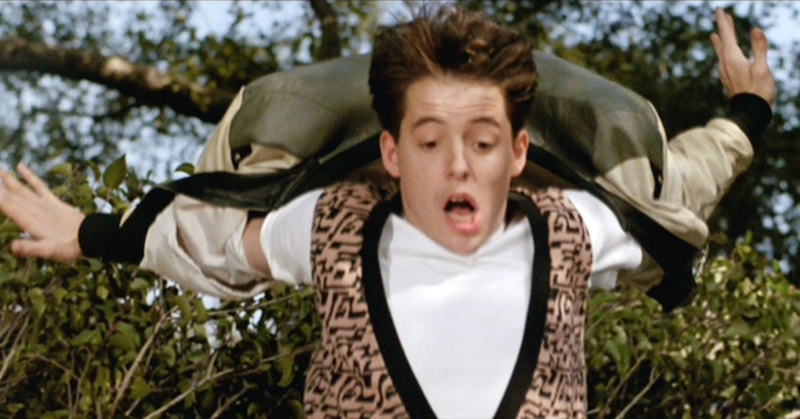 Here’s definitive proof that John Hughes was a fan of John Cheever.

Remember the penultimate sequence of Ferris Bueller’s Day Off? For those who don’t: after an impossibly full day of truancy (could he really have attended a Cubs game and toured the Art Institute and lunched at a fancy restaurant and performed in the Von Steuben Day parade, all in the same afternoon? And what must that parade have done to traffic? How did he and Cameron and Sloane make the drive back from the city so fast? Oh—and they go hot tubbin’ after that! Okay, okay, another time…) our eponymous hero notices the late hour on his girlfriend’s watch and commences a mad dash through the backyards of his neighborhood, trying to make it home before his parents, who are under the impression he has been sick in bed all day. (Spoiler: they do not figure it out.)

I saw this scene again recently and for the first time noticed the resemblance it bears to the events of John Cheever’s “The Swimmer,” in which Neddy Merrill resolves one Sunday to leave a cocktail party and return home via the swimming pools of his friends and neighbors. The motivations driving Ferris and Neddy differ (“I can’t get caught!”; “I’m drunk, what the hell.”) but the actions they take both convey a familiar American dissatisfaction with the most American unit of existence: suburbia. You’re not supposed to run or swim across neighborhoods like the ones Ferris and Neddy live in—you’re supposed to get in your station wagon and drive 25 and hey wow did the Gundersons redo their roof tiles? I don’t think I like that new tennis coach at the club. Can you make your hedges look like my hedges? To Ferris and Neddy, conformity is death before dying.

There is overlap even in the particulars of their respective journeys—like Neddy, Ferris (jeez, these names after a while) abruptly leaves his beloved to start his Odyssey-in-miniature, and along the way is met with obstacles and temptations that threaten to derail him. In Neddy’s case it’s drinks with the Grahams, Bunkers, and Levys, followed by foreboding interactions with the Hallorans, Sachs, and Biswangers (seriously, these names!); for Ferris it’s nearly being caught by his vindictive sister, stopping to flirt with two sunbathing women, nearly being caught by his witless father, angering a family in a house he can’t go around the outside of for some reason, and, finally, nearly being caught by the justifiably pissed off Principal Rooney. The endings diverge, of course (I will not spoil Cheever’s), but it can fairly be said that John and John were playing rhyming music.

It’s not just the mirroring action that makes kin of these stories—think of Ferris while reading Cheever’s descriptions of Neddy:

“He might have been compared to a summer’s day…”

“His life was not confining…”

“…he was determinedly original and had a vague and modest idea of himself as a legendary figure.”

What happens on summer days? You don’t go to school.

Is Ferris’ life confining? He controls his own attendance record and has the world’s most easily duped parents.

Does he have an idea of himself as a legendary figure? He certainly has an idea about that fourth wall.

Other than a passing mention of Cheever in an essay about Hughes written by close friend P.J. O’Rourke, there is no Googleable connective tissue between Hughes and Cheever. I can’t confirm that the former read the latter, and in a funny way it would be better if he never did (take that, original premise!). Cheever made it his life’s work to fictively document his adulthood home of Ossining, New York (aka Shady Hill, Bullet Park), Hughes made it his life’s work to fictively document his adolescent home of Northbrook, Illinois (aka Shermer), and even if we can’t find the direct link it seems something more than a coincidence that their creative preoccupations would be so similar. As Cheever’s drinking buddy Raymond Carver wrote, “Dreams, you know, are what we wake up from,” but what if what you wake up to is another dream, the American Dream, and it’s not quite enough?