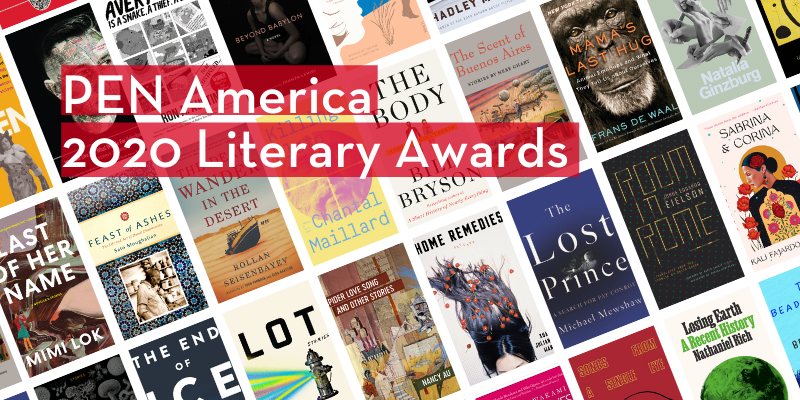 Today, PEN America announced their 2020 PEN America Literary Awards Finalists. The awards will dole out 330,000 to writers and translators for exceptional works published in 2019. The winners will be announced live on March 2, at the 2020 PEN America Literary Awards Ceremony, which will be hosted by Seth Meyers. Literary Hub would like to publicly declare our support for our own Aaron Robertson, whose translation of Beyond Babylon is a finalist for the PEN Translation Prize. (Other than that we have no favorites.)

For a book-length work of any genre for its originality, merit, and impact, which has broken new ground by reshaping the boundaries of its form and signaling strong potential for lasting influence.

To an author whose debut collection of short stories represents distinguished literary achievement and suggests great promise for future work.

To a debut novel of exceptional literary merit by an American author.

To an exceptional book-length work of any genre by an author of color.

We Cast a Shadow, Maurice Carlos Ruffin (One World)

The Grave on the Wall, Brandon Shimoda (City Lights Books)

If You Cross the River: A Novel, Geneviève Damas (Milkweed Editions)
Translated from the French by Jody Gladding

Drive Your Plow Over the Bones of the Dead: A Novel, Olga Tokarczuk (Riverhead Books)
Translated from the Polish by Antonia Lloyd-Jones

For a book-length translation of poetry from any language into English.

PEN/DIAMONSTEIN-SPIELVOGEL AWARD FOR THE ART OF THE ESSAY ($10,000)

For a collection of essays which exemplifies the dignity and esteem that the essay form imparts to literature.

I Like To Watch: Arguing My Way Through the TV Revolution, Emily Nussbaum (Random House)

For a distinguished biography of exceptional literary, narrative, and artistic merit, based on scrupulous research.

Last Boat Out of Shanghai: The Epic Story of the Chinese Who Fled Mao’s Revolution, Helen Zia (Ballantine Books)

For a book that exemplifies literary excellence on the subject of the physical or biological sciences and communicates complex scientific concepts to a lay audience.

Mama’s Last Hug: Animal Emotions and What They Tell Us about Ourselves, Frans de Waal (W. W. Norton & Company)

On the Backs of Tortoises: Darwin, the Galapagos, and the Fate of an Evolutionary Eden, Elizabeth Hennessy (Yale University Press)

The End of Ice: Bearing Witness and Finding Meaning in the Path of Climate Disruption, Dahr Jamail (New Press)