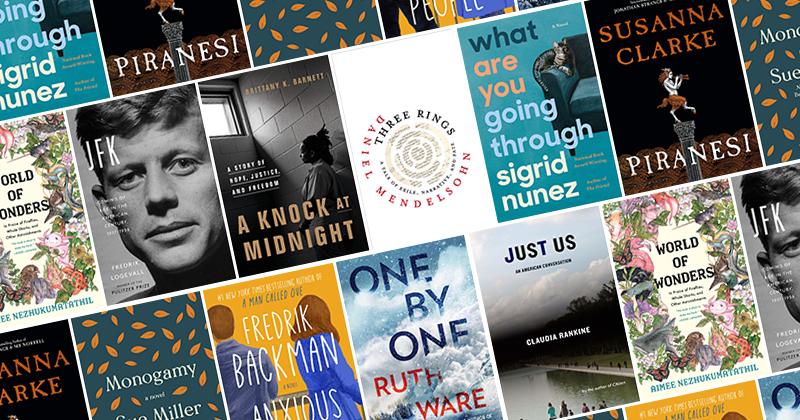 Susanna Clarke’s Piranesi, Sigrid Nunez’s What Are You Going Through, Claudia Rankine’s Just Us, and Frederik Logevall’s JFK all feature among the Best Reviewed Books of the Week.

1. What Are You Going Through by Sigrid Nunez

“Reading Sigrid Nunez’s absorbing new novel is somewhat akin to having a long conversation with someone who is telling you something very important, but is telling it in a very quiet voice. You have to really pay attention. Be assured, however, that the experience will be worth it. You will emerge calmer, meditative, more thoughtful, as if you have benefited from an excellent literary massage of sorts … Nunez tells the simplest of stories—about a woman accompanying a terminally ill friend through her last months—and expands it into an exploration of the largest of themes: nothing less than the realities of living and dying in this world and how we feel about both … Like the best of our writers, Nunez is a bit of a seer and a prophet, and so it is discomfiting to imagine that what she presents here as the state of the world could be true … Nunez’s unerring and quietly observant eye burrows further and further into these experiences as if they will unearth an answer of sorts … Beauty, friendship, nature, art: These are the salves to loneliness and despair, and Nunez offers them all in this searching look into life and death.”

Read an excerpt from What Are You Going Through here

“…if her first novel established [Clarke] as one of the world’s best fantasy writers, Piranesi is set to place her in the pantheon of the greats, no modifier necessary … Both timeless and strikingly timely … Piranesi is completely unencumbered by questions of identity. His mind is a mystery—both to himself and to the reader—and one of the many joys the book offers is the satisfaction of slowly piecing together an explanation for his apparent amnesia. Another is the experience of seeing the world, however briefly, through the eyes of someone curiously devoid of ego. And then there is the simple thrill of turning the pages to find out what will happen next. Although on one level the book is a philosophical puzzle, like something out of Kafka or Borges, it offers the excitement of an adventure story and the dark allure of a detective yarn … Now, as we face a winter of confinement, the subtle transformation in Clarke’s work lingers in my mind—a feeling of finally learning how to pick a lock.”

“… an absorbing and meticulously crafted page-turner … Miller dissects their union and its tragic aftermath with both deep sympathy and forensic detachment … Miller’s subject is not just grief or marriage, though she delves profoundly into both. She’s also intrigued by the mystery of human personality, shaped by the past, but sometimes able to transcend it … She depicts both her characters and their Cambridge environs with such tenderness and precision that many readers will feel regret when Miller’s story, like life itself, reaches its inevitable end.”

Read an excerpt from Monogamy here

“Backman manages to make the ordinary feel extraordinary, imbibing seemingly drab topics with passion and fervour and it works every single time to leave me absolutely entranced. And it’s one hundred percent because of the characters … Backman knows how to capture all the little moments in life we never really think about, the connections we make and take for granted instead of seeing them as the blessings they are, the kindnesses and cruelties that have become the norm when really, they should stand out, for better or for worse … what I loved most about this book was how it made me question how far I would go for the people I love … Riveting and jovial while not shying away from the hard truths of life, Anxious People demonstrates Backman’s ability to make even a would-be hostage situation one of the most entertaining and profound encounters to read about. May this man never stop writing.”

“… the most brazenly Christie-ish of all [Ware’s] novels … Ware’s story follows the snow tracks of Dame Agatha’s classic but cunningly swerves off-road at crucial moments with the aid of techie updates … As in Christie’s mysteries, part of the great pleasure of reading One by One lies in rereading key passages and realizing how dim one was (as a reader) the first time round. Much of the crucial information is out in the open, right there on the page in dialogue and description, but Ware expertly scatters red herrings galore so that even the most alert reader becomes diverted into false deductions and dead ends … Like Christie, Ware prefers to have her killings transpire ‘offstage,’ making One by One that increasingly rare literary achievement: a non-grisly thriller. The final section, where the last intended victim is locked in a ghastly battle of wits and endurance with the unmasked killer, has to be one of the most ingeniously extended plot climaxes in the suspense canon. I don’t know how Ruth Ware manages to keep up her pace of writing such fine and distinctive suspense novels every year (even Christie needed to take a break every so often); but, on behalf of suspense lovers everywhere, may I say that I’m grateful she has turned out to be a marathoner, rather than a sprinter.”

1. Just Us: An American Conversation by Claudia Rankine

“Just Us is about intimacy. Rankine is making an appeal for real closeness. She’s advocating for candor as the pathway to achieving universal humanity and authentic love … Rankine is vulnerable, too. In ‘lemonade,’ an essay about how race and racism affect her interracial marriage, Rankine models the openness she hopes to inspire. ‘lemonade’ is hard to handle. It’s naked and confessional, deeply moving and, ultimately, inspirational … Just Us, as a book, is inventive … Claudia Rankine may be the most human human I’ve ever encountered. Her inner machinations and relentless questioning would exhaust most people. Her labor should be less necessary, of course.”

2. World of Wonders: In Praise of Fireflies, Whale Sharks, and Other Astonishments by Aimee Nezhukumatathil, Illustrated by Fuminori Nakamura

“… shimmering … Nakamura’s delicate, elegant illustrations frame these emotive, tender writings … The essays uncover the astonishing habits of ribbon eels, whale sharks, flamingos, dancing frogs, and other lovelies, while other less popular but no less wondrous flora and fauna also shine. Alluring lines about the Corpse Flower, an Indonesian native that grows large and stinky to attract nocturnal pollinating beetles, are enough to make anyone a fan. Cassowaries with killer claws, the bizarro Vampire Squid, and the Potoo of Central America (a bird with a croaking, retching call) are also described with passion, artful wordsmithing, and reverence … Natural world subjects are touchstones for heartfelt personal revelations and meditations about social and cultural issues … There’s also sly humor … a bibliophilic and visual delight that dazzles the senses, much like Nezhukumatathil’s beloved comb jellies. Her entrancing essays are a reminder to spend more time outdoors wondering at and cherishing this ‘magnificent and wondrous planet.’”

“…remarkable rivalries within the Kennedy family—propelled by valour, vanity and greed—form the backbone of volume one of Frederik Logevall’s riveting life of JFK, which takes the story up to 1956. They serve as a vignette of American history in the middle years of the 20th century, where valour, vanity and greed were also the driving forces … Dominating it all is the frightful and formidable paterfamilias Joe Sr. Logevall paints a richly sympathetic portrait of the old monster, paying tribute to his many gifts as well as sparing us none of the grim details of the dark side of his personality … Unlike his father, JFK was extraordinarily skilled at creating the right impression … As a result, he emerges from this biography as a less clearly defined figure than many of those around him. Logevall has written a superb book but its central character remains elusive … Jack had the charm and the grace but his little brother had the steel. JFK came to rely on Bobby to do his dirty work. How that helped him reach the White House is for volume two. But already from this book it is clear that the ultimate fulfilment of the Kennedy clan’s political ambitions required that the glamorous, nimble Jack distance himself from his father and move closer to his younger brother. Which means he never really distanced himself at all.”

4. A Knock at Midnight: A Story of Hope, Justice, and Freedom by Brittany K. Barnett

“… moving … Barnett tells each client’s story fully, allowing readers to grasp the weight of years of incarceration and the impact of the War on Drugs on the Black community. Her writing captures both the precision of law and the emotion of seeking freedom. A riveting memoir of injustice, resilience, and hope, A Knock at Midnight is a personal look at a modern humanitarian crisis.”

5. Three Rings: A Tale of Exile, Narrative, and Fate by Daniel Mendelsohn

“It has been good to read Three Rings in the time of lockdown, not only because it is a great joy in itself, but because of the variety and richness of its references … Mendelsohn’s book has gathered into its net, in a way that is both smooth and sharp, many of the great books across time, and has given them a new significance in a fresh and dazzling context … it is a performance of considerable magic … Mendelsohn uses a great galaxy of words for his own circling technique. Some of these are: whirl, twist, weave, spin, spiral, twine, entangle, involute, digress, elaborate. It sounds like a mighty powerful dance. And so it is … Reading Three Rings was for me one of the richest reading experiences I have had for a while.”