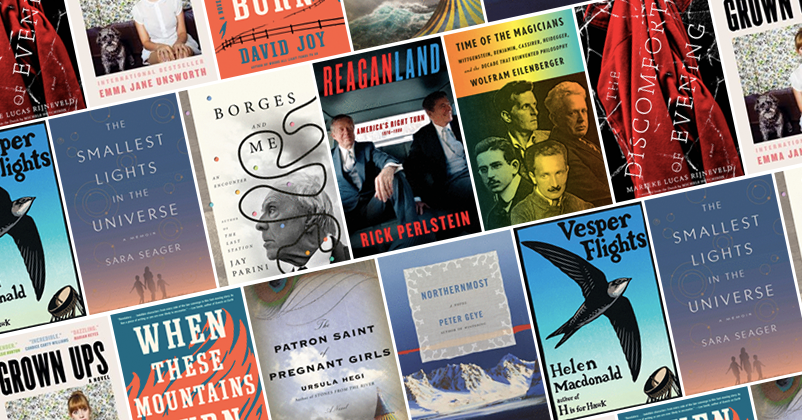 Helen Macdonald’s Vesper Flights, Marieke Lucas Rijneveld’s The Discomfort of Evening, Jay Parini’s Borges and Me, and Rick Perlstein’s Reaganland all feature among the Best Reviewed Books of the Week.

1. The Discomfort of Evening by Marieke Lucas Rijneveld

“Discomfort is putting it mildly. Marieke Lucas Rijneveld’s debut novel, which has been longlisted for the International Booker prize, goes all the way to disturbing … an unflinching study of a family falling apart in the madness of grief, rendered all the more unnerving for the childishly plain, undramatic way their compulsive behaviours are reported … Rijneveld really doesn’t hold back with all this, poking sticky fingers into nasty places to stir up uneasy memories of prepubescent explorations of sexuality and mortality. The novel evokes a general curiosity and bewilderment with the adult world, here given two supercharged shots in the backside by the unspeakable (in all senses) tragedy of the brother’s death and the pressure of extreme religious beliefs … Not everything works: Rijneveld seems to strain in search of an ending … But this is a pretty remarkable debut. Confident in its brutality, yet contained rather than gratuitous, it introduces readers to both a memorably off-key narrator and a notable new talent.”

Read an excerpt from The Discomfort of Evening here 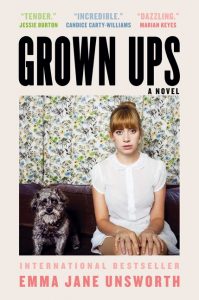 “Emma Jane Unsworth’s new novel, Grown Ups, grants you precisely that voyeuristic look into the hideous unseen machinations behind the posts. And it is deeply unsettling … Although it’s a comedic novel—and a truly funny one—it’s less of an escape than it is a set of Clockwork Orange metal eye clamps, forcing you to examine, in paragraphs and paragraphs of hand-wringing over exclamation points and emoji choices and the exact right timing of a fav, your own profoundly unhealthy relationship with social media … Grown Upssucceeds in not just accurately portraying this modern obsession, but in tenderly revealing what might be driving it.”

3. When These Mountains Burn by David Joy

“… outstanding … Denny’s inherent decency in a world of corruption and mendacity forces the reader into difficult emotional territory. You’d cross the street to get away from Denny Rattler… if you didn’t know him. And if you did know him? You’d feed him a Swanson chicken dinner and do his laundry … a crime novel, surely—and a damn good one—but it’s also a snapshot of small-town America at a fracture point, when the least of the concerns is the fire that could consume everyone, all at once.”

4. The Patron Saint of Pregnant Girls by Ursula Hegi

“… a surprisingly sunlit tale of grief and rebirth, drawing on history and folklore to create an indelible portrait of a family and community forged in crisis … Hegi performs a kind of alchemical cartography, transporting readers to a place so vividly rendered they may undergo culture shock upon reentering our own damaged world … At times, the sweetness overwhelms the book’s grittier, more compelling story lines. Childlike Heike doesn’t just marry a beekeeper, she plays the cello like a dream. Kalle, a toymaker, leaves the circus to visit Lotte, arriving on a zebra. Still, even the most fanciful scenes feel deeply embedded in grief … Hegi’s deeply compassionate novel charts the shadowlands where grief makes its home.”

Listen to an interview with Ursula Hegi here

“… intricate and beautifully written … though the seed of this novel—Odd’s trial against the elements in 1897—is engaging and memorable, it is not what makes the core of the story. Those events, both in Odd’s life and in Greta’s life, come later. They are, as the journalist’s words imply, only something that can be seen after the fact when the cold is gone and a moment’s respite offers a chance at self-reflection … isn’t simply a story about surviving nature. There are polar bears, deadly crevasses and blinding whiteouts aplenty, but it’s rather a story about the events that come when one emerges from the storm. For Odd and for Greta, more than a hundred years later, it’s the story of love, marriage and, in the broader sense, life. Geye is at his best when describing Odd’s predicaments throughout. The language is lyrical and often poetic, almost sounding as if Mary Shelley herself had come back to describe the frozen north … While Greta’s chapters seem decidedly more straightforward in their layout and descriptions, Geye’s wonderful gift for words is evident throughout, not only describing Greta but also her family lineage.”

“…[a] radiant new essay collection … The most transfixing texts are powered by an irresolvable tension. In Macdonald’s case, it’s between her almost religious belief in the otherness of animals and her own lifelong desire to find significance in that otherness, to seek lessons that pertain to herself and to humanity … Readers willing, once in a while, to put up with the sensation of being schooled like a recalcitrant toddler will receive in exchange armfuls of literary riches … In her introduction, Macdonald writes that she hopes this collection ‘works a little like a Wunderkammer,’ a German word usually translated as ‘Cabinet of Curiosities,’ but she prefers the more literal ‘cabinet of wonders.’ It is that, but the treasures in it are mostly not exotica and relics collected from far-off lands. They’re all around us, just waiting to be noticed by the right person.”

2. The Smallest Lights in the Universe: A Memoir by Sara Seager

“… stark, bewitching … The merciless seesaw of [Seager’s] grief makes for harrowing reading … The second half of her story gleams with insights into what it means to lose a partner in midlife, and just as the widows helped Seager feel less alone, her story is sure to help any readers grappling with a similar loss … Seager’s [prose] is rawer and starker, full of blues and blacks, written in the ink of grief, suffering, healing and—ultimately—clarity. In Seager’s hands you’re as apt to learn about ‘a special body bag that’s designed to slide down stairs’ as about storm-wracked rogue exoplanets where it rains molten iron … beautifully dramatize[s] the emotional precarity of having one’s career pinned to the fate of space hardware … address[es] the challenges of being female physical scientists in a male-dominated field, and convey[s] the struggle of operating in the vast scales of the universe at work, then commuting home to operate in the humbler scales of the domestic sphere … [Seager] exemplifies the humanity of science.”

=3. Borges and Me: An Encounter by Jay Parini

“Parini weaves a brilliant narrative touching on Borges’s singular writing style, the effects of aging on the author (Borges was around 70 and blind when Parini met him), and the workings of a perpetually active mind as seen through the lens of Borges’s literary reality. The resulting portraiture of the two men further boasts passages of somewhat oddly placed profanity and allusions to the lives of other writers and poets such as Walt Whitman. Parini’s cook even makes an appearance, comfortably fitting into a narrative reflecting Borges’s ficto-historical sensibility … Essential for Borges’s legions of fans, as well as those who enjoy literary memoirs by experimental writers whose works play a bit more loosely with the facts.”

“… absorbing … Perlstein doesn’t point out the irony, but he doesn’t need to. The joy of this book, and the reason it remains fresh for nearly a thousand pages of text, is that personality and character constantly confound the conventional wisdom … Perlstein is never deterministic, and his sharp insights into human quirks and foibles make all of his books surprising and fun, if a little smart-alecky at times … a small, redeeming moment in Perlstein’s overspilling narrative, but the glimpse into Reagan’s conscience is characteristic of Perlstein’s storytelling. Reagan is hardly a hero to Perlstein, whose own politics are to the left. But in this description, the former movie actor turned politician is intensely human, and capable of empathy, or at least shame … full of portents for the current day.”

5. Time of the Magicians: Wittgenstein, Benjamin, Cassirer, Heidegger, and the Decade That Reinvented Philosophy by Wolfram Eilenberger

“Time of the Magicians is worthy of the hype that enveloped it in Germany, where it has sold more than 100,000 copies—that is, a hundred times as many as any of Benjamin’s works in their first print run. It is a tremendous feat of scholarship, but more pertinently it is also a technical masterpiece, knitting together the four men’s love lives, money troubles, ontological anxieties and the wider ferment of the Weimar republic with uncommon dexterity … My only substantial complaint is that Eilenberger does not always do as much as he might to untangle some of the more 14-dimensional knots of abstraction for a bonehead like me. At times I found myself oscillating between repeated futile assaults on Wittgenstein’s notion of the ‘statement as picture of reality’ and staring helplessly for minutes on end at the pigeons nesting outside my window, thinking how nice it would be to be a pigeon and not to have to grapple with Wittgenstein.”