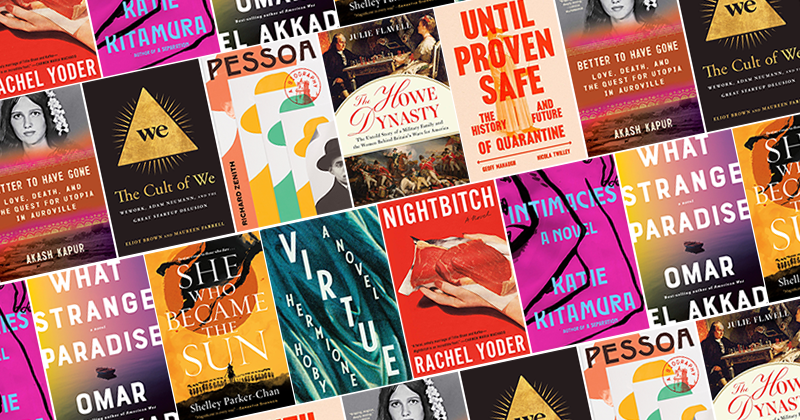 “… witty and bizarre … what makes Nightbitch stand apart from the usual early motherhood stories, teeth and all, is that Yoder doesn’t focus on how hard being a new mom is, nor does she romanticize the experience. Instead, by blending the real and the surreal, Yoder shows a woman following her primal instincts and becoming her own person—or dog, I should say—outside of cultural norms. And in doing so, she finds freedom … Be warned—the novel is dark, gory, violent. But Nightbitch is fantastically rendered. Yoder’s voice is razor-sharp, poignant and wry. While it’s seeped in mythical qualities, the haunting premise doesn’t seem that far-fetched. Nightbitch is a stunning modern feminist fable that shouldn’t be missed.”

Read an excerpt from Intimacies here

“…intense, unsettling … Intimaciesis very much a story that seems to be something familiar but soon morphs into something disorientingly strange … The incongruity between [the narrator’s] domestic life and professional life is what makes Intimaciesso fascinating … Through parts of this story, Kitamura is exploring impossibly remote territory … Her narrator’s experiences in the translation box raise some of the same questions as Edna O’Brien’s novel The Little Red Chairs… But with her Jamesian attention to the slightest movement of bodies and words, Kitamura keeps Intimaciesrooted to the ordinary domestic experiences of her narrator, her petty jealousies, her passing suspicions. The effect is a kind of emotional intensity that’s gripping because it feels increasingly unsustainable.”

Read an excerpt from What Strange Paradise here

“… El Akkad keeps his plot and focus tight. Told from the point of view of two children, on the ground and at sea, the story so astutely unpacks the us-versus-them dynamics of our divided world that it deserves to be an instant classic. I haven’t loved a book this much in a long time … El Akkad cleverly shuffles between the reflections, prejudices and back stories of the two groups, effectively effacing assumptions of superiority and inferiority, good and bad … Wisdom abounds, but as stark observation rather than comforting homily or advice … reads as a parable for our times … In a moment of drowning, in that liminal space between life and death, Amir suddenly understands everything: All our love and avarice and hopes and failings are unbound in a passage of such beautiful writing that I would cite it here in its entirety if I didn’t want people to have the joy of reading it fresh on the page … This extraordinary book carries a message, not of a trite and clichéd hope, but of a greater universal humanism, the terrifying idea that, ultimately, there are no special distinctions among us, that in fact we are all very much in the same boat.”

4. She Who Became the Sun by Shelley Parker-Chan
(Tor)

“… an epic tale of the power of desire, the role of free will in deciding a person’s fate, and the twisting machinations of power. Zhu is a powerful queer anti-hero, her means sometimes questionable, her desire overflowing. The side characters in her story and the plots and betrayals that swirl around the book’s events are themselves intensely compelling, but it is Zhu’s strength of will and passion that give this novel its spark.”

Read an excerpt from Virtue here

“Luca’s…inevitable crash back to Earth is rife with consequences that won’t fully unravel for years to come. In her second book, a delicious meditation on morality, nostalgia, and art, Hoby…searingly renders Luca’s many worlds and lambasts insincere compassion with nuance.”

=1. Until Proven Safe: The History and Future of Quarantine by Geoff Manaugh and Nicola Twilley
(MCD)

“… uncanny in its prescience. It also serves as a good reminder for all of us to refrain from feelings of complacency because as this fascinating book shows again and again, it’s foolish to think this will be our last pandemic … Twilley and Manaugh see things that others don’t. Their insatiable curiosity reveals itself through all of their endeavors.”

=1. Better to Have Gone: Love, Death, and the Quest for Utopia in Auroville by Akash Kapur
(Scribner)

“… extraordinary … a riveting account of human aspiration and folly taken to extremes … It’s a complex tale made somewhat more fathomable by the treasure trove of letters, diaries, and interviews at his disposal … poignant passages … Kapur’s prose is nimble and fluid, as his attitude toward his material shifts from dismay to anger to anguish and, finally, to hope … Despite everything, Akash and Auralice stubbornly cling to a vision of a better world. It’s a vague yearning that the author can’t quite put into words. Readers may be pardoned for being more skeptical.”

3. The Cult of We: Wework, Adam Neumann, and the Great Startup Delusion by Eliot Brown and Maureen Farrell
(Crown)

“… a juicy guided tour through the highly leveraged, not-quite-rags-to-billion-dollar-parachute saga of WeWork and its co-founder Adam Neumann … separates itself from Billion Dollar Loser by quickly passing over Neumann’s upbringing and experiences on kibbutzim and in the Israeli military, as well as the origins and earliest days of WeWork…Instead, the book saves its firepower for the cataclysmic combination of Neumann’s gift for salesmanship, addiction to fund-raising and focus on his personal wealth … Brown and Farrell show an agility for explaining key business dynamics that are crucial both to understanding specific moments in WeWork’s trajectory, and also to grasping the role of public and private investors in the company’s successes and failures. They do so without slowing down the narrative or overdoing it such that readers well versed in business might find it boring or pedantic.”

Read an excerpt from Pessoa here

“Mammoth, definitive and sublime, Richard Zenith’s new biography, Pessoa, gives us a group portrait of the writer and his cast of alternate selves—along with a perceptive reading of what it meant for Pessoa to multiply (or did he fracture?) like this. What problems did it solve—and invite? Zenith has written the only kind of biography of Pessoa truly permissible, an account of a life that plucks at the very borders and burdens of the notion of a self … When we praise biographies, we often praise stamina and thoroughness, a kind of density of detail—the subject seems to live again. In reading Pessoa, it was the necessity of a certain kind of tact that struck me. Zenith reconstructs a life with supple scholarship and just the right kind of proportion, applying the right amount of pressure on those formative experiences of childhood, grief, sexual anxiety and humiliation, early ecstatic encounters with art—never losing sight of the fact that Pessoa’s real life happened elsewhere, as for many writers, alone and at his desk.”

5. The Howe Dynasty: The Untold Story of a Military Family and the Women Behind Britain’s Wars for America by Julie Flavell
(Liveright)

“Spanning almost a century of the Georgian era, The Howe Dynasty presents a richly detailed and lively saga of one of its most distinguished families. Challenging and insightful, it reflects impressive scholarship, grounded in exhaustive archival research on both sides of the Atlantic. An especially valuable source is the correspondence that Caroline Howe maintained over more than 50 years of friendship with Lady Georgiana Spencer, mother of the celebrated leader of fashion, Georgiana Cavendish, Duchess of Devonshire. The Howe Dynasty shows how women whose supreme function in life was to produce male heirs could nonetheless find a voice through informal ‘networking,’ establishing crucial contacts in the drawing room or on the hunting field that could be mobilized to secure favors and control opinion.”